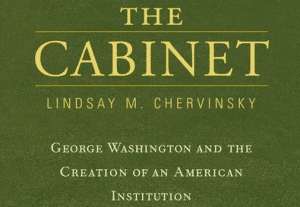 The Councils of Wars that were held by General Washington and his Officers set precedence with how President Washington interacted with his fellow political leaders and more specifically, his Cabinet. The US Constitution never established a presidential cabinet―the delegates to the Constitutional Convention explicitly rejected the idea.

Faced with diplomatic crises, domestic insurrections, and constitutional challenges―and finding congressional help lacking―Washington decided he needed a group of advisors he could turn to. He modeled his new cabinet on the councils of war he had led as commander of the Continental Army. In the early days, the cabinet served at the President’s pleasure. Washington tinkered with its structure throughout his administration, at times calling regular meetings, at other times preferring written advice and individual discussions.

The tensions in the cabinet between Hamilton and Jefferson heightened partisanship and contributed to the development of the first party system. And as Washington faced an increasingly recalcitrant Congress, he came to treat the cabinet as a private advisory body to summon as needed, greatly expanding the role of the president and the executive branch.

The Fort Plain Museum will host “Councils of War and the Cabinet: How the Revolutionary War Shaped the Presidency,” a free virtual presentation by Lindsay M. Chervinsky set for Monday, March 28th. In this talk, Chervinsky will look at how the Revolutionary War helped form the Presidency under George Washington. Chervinsky will look at how George Washington was able to create one of the most powerful bodies in the federal government.

Dr. Lindsay M. Chervinsky is a historian of the presidency, political culture, and the government — especially the president’s cabinet. Her research can be found in publications from op-eds to books, speaking on podcasts and other media, and teaching for every kind of audience.

Dr. Chervinsky’s book, The Cabinet: George Washington and the Creation of an American Institution, was published on April 7th, 2020. She also writes a monthly column for Governing and Washington Monthly. She is the cohost of The Past, The Promise, The Presidency, and a regular guest on The Thomas Jefferson Hour podcast. She is the creator of the Audible course: The Best and Worst Presidential Cabinets in U.S. History.