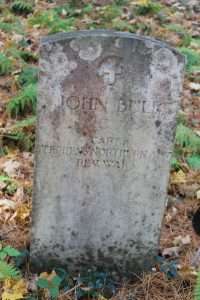 Former New Lebanon resident George Clark, a member of the community’s Floyd Carlton Post of the American Legion, has been working to identify the graves of Revolutionary War soldiers for many years.

Helping him has been his friend Dale Ackley. Former town historian Sharon Moon and Cemetery of the Evergreens board members have been working at it, too. The undertaking has been immense, and, if they succeed in their goal to restore headstones, it will be very costly.

State funding is not an option as the cemetery is privately owned. Clark called around to find out where funds might be available, and someone suggested the Daughters of the American Revolution. He placed a call to the Hendrick Hudson Chapter, located in Hudson, NY, last June.

What he learned was that the chapter does not have direct access to funding but that it would enthusiastically sponsor a grant application to the National Society Daughters of the American Revolution. And so began a cooperative effort between the Hendrick Hudson Chapter, NSDAR, the Cemetery of the Evergreens, Clark’s American Legion post, the Town of New Lebanon, the Lebanon Valley Historical Society, and Moon. It’s a continuation of an earlier effort that also included Cub Scouts, Boy Scouts, and the New Lebanon Central School District. It may well engage them again. 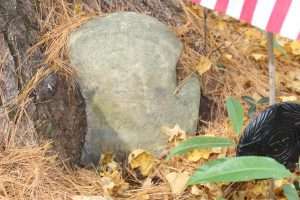 The Cemetery of the Evergreens is famous as the final resting place of Samuel Tilden, top vote-getter in the disputed presidential election of 1876, who ultimately lost the seat to Rutherford B. Hayes. Tilden’s imposing sarcophagus is on the National Register of Historic Places and attracts a lot of attention.

What has been overlooked until recent years has been the oldest part of the cemetery, called Cypress Hill, which is where the earliest burials including perhaps three dozen Revolutionary War veterans are located. About a decade ago, they were largely unknown, until then-town-historian Sharon Moon started investigating.

What she found was a long-overgrown, poison-ivy-infested hilltop. She set to work to minimize the poison ivy and to find and preliminarily mark graves from two centuries ago. She researched existing documentation indicating veteran burials. Now, the poison ivy has receded significantly, and the vegetation has been reduced to manageable levels. And a new consortium of workers, including the new town historian, is joining Moon and the members of the cemetery board in identifying and honoring these veterans, many of whom helped establish the town over 200 years ago.

Current New Lebanon Town Historian Elizabeth Sheffer-Winig, who is also a Hendrick Hudson DAR Chapter member, said the project will “identify, catalog, and honor those who served in the American Revolution. We intend to restore the stones, research the lives and military service of the patriots buried there, and produce a booklet about them. The project’s culmination will be a grave-marking ceremony by the Hendrick Hudson Chapter that will honor each patriot.” It’s been named Restoring History: Revolutionary War Veterans in New Lebanon’s Cemetery of the Evergreens.

Hendrick Hudson Chapter Historian Doris Harrington said “Placing veterans’ markers is a tangible way for our chapter and the town to honor and connect with Revolutionary War veterans, and maybe even some descendants. The markers will highlight and publicize the life and service of these patriots, some of whom are listed in the NSDAR’s extensive genealogy. They will become part of the legacy of the Revolutionary War, and we will archive their information in our chapter’s genealogical and historical library.”

An important milestone arrives in 2025, when the 250-year anniversary of the onset of fighting for independence began, and the following year will be 250 years after the Declaration of Independence. Chapter Regent Jeane LaPorta said, “Completing this project in advance of 250-year celebrations will be gratifying to many. The DAR’s goals are historic preservation, education, and patriotism. With this effort we refuse to let slip into the dustbins of time the heroic deeds of veterans. As importantly, we are Daughters of the American Revolution, and as such we feel strongly about the heroic and substantial efforts by the women of that day, whether they be veterans themselves or the mothers, wives, daughters, or siblings of veterans. Without their contributions, the War for Independence surely would have failed. Keeping memories alive and honoring the foundational struggles of men and women is vitally important.” 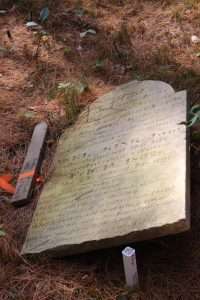 Many patriots’ graves are in small or even private cemeteries, many are overgrown or deteriorating or already lost to time, and many have not yet been honored as being Revolutionary War veterans. Chapter Regent LaPorta said she has been gratified to see the interest in restoring and marking these graves, and she noted that veterans of other wars merit honoring, as well. She would be pleased to see similar undertakings in other towns.

The Hendrick Hudson Chapter of the DAR was chartered in 1896. A nonpartisan organization welcoming eligible women without regard to race, creed, or religion, it includes 130 members who trace their lineage back to a patriot in the American Revolution–whether serving as soldier, shopkeeper, or seamstress. In accordance with the National Society DAR, members work to perpetuate the memory and spirit of the women and men who achieved American independence, to promote the development of an enlightened public opinion, and to foster patriotic citizenship.

The chapter owns and maintains its meeting house, the Historic Robert Jenkins House, at 113 Warren Street in Hudson. The chapter and the chapter house can be accessed online, by emailing hendrickhudsonchapterdar@gmail.com, and by calling (518) 828-9764.