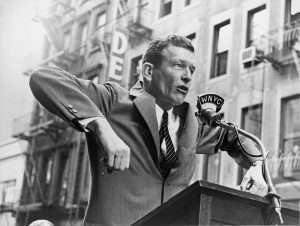 If you will pardon a second pun: Talk about peddling politics.

Lindsay campaigned on bicycle in the Coconut Grove section of Miami for the Democratic presidential nomination, The Associated Press reported in The Post-Star on March 14th, 1972.

“The mayor sprinted ahead of newsmen, who rented bikes and accompanied him.”

In other lighter side of politics anecdotes collected from North Country historic newspapers:

A reasonable facsimile of New York Gov. David Hill was positioned to appear to be grinding the coffee at the J.S. Powers grocery store on Warren Street in Glens Falls in 1888.

In a “novel plan for calling attention to his store,” Powers hired G. E. Adams to craft a life-size sheet iron cutout of a man, on which local sign painter and portrait artist W.W. Kennedy painted a likeness of the governor.

“One of the hands of the dummy will be attached to the crank of Mr. Powers’ coffee mill, and as the mill is propelled by a water motor, the counterfeit presentiment of the governor, arranged on pivots, will go through all the motions of a man turning the grinder,” The Morning Star reported on May 22nd, 1888.

In the 19th century, congressmen brought home vegetables to go with all that pork. “The agricultural editor of the paper doffs his tile to Congressman Moffitt, of this district, for a variety of vegetable seeds for the United States Department of Agriculture,” The Morning Star reported on March 7th, 1888.

On April 10th, 1972, The Post-Star reported that Theta Sigma Phi, a national professional society for women in journalism, honored First Lady Pat Nixon as the 1972 “Woman in the News,” recognizing “her contribution as a world-wide communicator and as an ambassador of good will for the United States.”

On June 7th, 1888, The Morning Star reported that the applause lasted a full 23 minutes when “Silver Tongued Daniel Dougherty” placed the name of Grover Cleveland in nomination at the Democratic National Convention.

“Flags, banners, hats, everything within reach, were waved in the air, and trumpets, tin whistles and bugles added to the din. … A lady in the gallery, unable to secure a flag, took her bonnet from her head and waved it by the ribbons.”

“Dealers in grave stones are to be protected now. A bill has passed the Assembly to give them a lien upon monuments until they are paid for. Now let something be done for the poor newspaper publishers. Of course, a lien on the papers sent out to deadbeat subscribers would be as worthless as a poem on ’Snow.’” – The Morning Star, March 29th, 1888.

“One hundred years ago the governor of New York advised the people not to invest in railroads, predicting they could never be successfully operated. Today the New York Central sends a train across New York, 436 ½ miles, in 425 ¾ minutes, and is worthily called ‘America’s Great Railroad.’” – The Granville Sentinel, October 26th, 1891.

“The fascinating thing about a democracy is that frequently it can never be sure of where it is going until it gets there.” – The Post-Star, April 3rd, 1947.