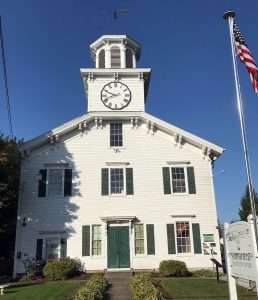 Members of the Cabinet of Freedom of the National Abolition Hall of Fame (NAHOF) went to the Great New York Fair for several years to introduce the public to a unique museum that occupies the second floor of the Smithfield Community Center in Peterboro, New York.

On one of these occasions, NAHOF occupied a booth in the Center of Progress building. Hundreds of fair-goers went by the NAHOF location. Some who stopped to hear about NAHOF would ask, “Where is Peterboro?” NAHOF hosts explained that Peterboro is a small hamlet in the heart of Madison County. Few who passed by stayed long enough to hear about what the Museum had to offer. NAHOF representatives began wearing t-shirts that carried the words “Where is Peterboro?” on the front and on the back were the words “North of Pleasant Valley, South of Clockville, East of Fenner, West of Salem.” 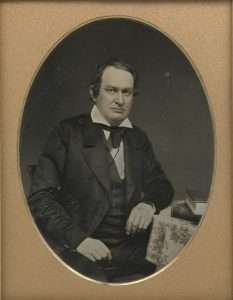 The most important question is not “Where is Peterboro?” but “Why Peterboro?” Why should a not-for-profit institution designated as the National Abolition Hall of Fame and Museum be in what is now the Smithfield Community Center of Peterboro?

Peterboro, one must admit, is not at the crossroads of America nor is it a large city with an urban milieu and many amenities. Peterboro has no gas station, no motel, and only one place to eat, the Deli on the Green. Octavius Brooks Frothingham wrote in his biography of Gerrit Smith that was published in 1878: “At present, Peterboro is a quiet, inert, dull village. It has no hotel, no activity of interest for traveler or sojourner.”

Frothingham thought he knew why Peterboro had lost its vitality. Gerrit Smith, the prominent 19th-century reformer, wealthy landowner and philanthropist was dead. When Smith was alive, Frothingham thought, Peterboro’s most famous resident “had brought people of prominence in political life and freshened the soul of the place with discussions on matters of general concern.” Gerrit Smith died on December 28th, 1874.

Gerrit Smith, the subject of Norm Dann’s monumental biography Gerrit Smith: Practical Dreamer, lived in Peterboro. It was Smith who invited the abolitionists to “Come to Peterboro” in 1835 after they had been mobbed in Utica while attempting to establish a state-wide antislavery society. In subsequent years, he was the lodestone that drew many other abolitionists and reformers to Peterboro. The Gerrit Smith estate in Peterboro became a National Historic Landmark in 1997.

Peterboro residents today may not agree with the notion that their village was “dull and inert” in 1878, as Frothingham alleged, or at any time since then. However, it is fair to say that the establishment of the National Abolition Hall of Fame and Museum has brought renewed attention to the reform issues that so interested Gerrit Smith, especially abolition.

Early in the 1990s, Elizabeth (“Beth”) Spokowsky led an effort to address the needed repairs to the Smithfield Community Center, housed in a former Presbyterian Church built in 1820. She also deserves first honor for having suggested that Peterboro needed a National Abolition Hall of Fame and that a Cabinet of Freedom be formed.

The mission statement of the National Abolition Hall of Fame is as follows:

The National Abolition Hall of Fame and Museum
honors antislavery abolitionists,
their work to end slavery,
and the legacy of that struggle,
and strives to complete the second and ongoing abolition –
​the moral conviction to end racism.

In October 2004 Dorothy Willsey, Norm Dann, Hugh Humphreys, myself, and others met to discuss the feasibility of establishing an Abolition Hall of Fame in Peterboro. The challenge was significant. There was an important story to tell and, then as now, a need for people of all ages to draw inspiration from abolitionists such as Frederick Douglass, Gerrit Smith, Lucretia Mott, Harriet Tubman, and William Lloyd Garrison. Despite having few resources and no physical space for a museum, the National Abolition Hall of Fame began programs as early as 2005. The Board of Regents of the New York State Education Department awarded NAHOFM a charter in March 2007

Inductions into the National Abolition Hall of Fame 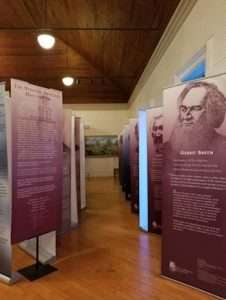 NAHOF honors abolitionists by inducting them into the Hall of Fame. Nominations are solicited from the public and reviewed by a panel of scholars outside of NAHOF. Based upon those reviews, the Induction Committee makes recommendations to the Cabinet of Freedom, the governing board of NAHOF. The Cabinet of Freedom makes the final decision on which nominees will be inducted. As of this writing, twenty-five abolitionists have been inducted. NAHOF initially held induction ceremonies semiannually in the even years with commemoration events held in the odd years. At the commemorations, public symposia explored the legacy of the previous year’s inductees. Both inductions and commemorations were held in October on a weekend closest to October 22 because that was the month and day when abolitionists convened in Peterboro’s Presbyterian church in 1835 to complete the work they had begun in Utica.

All those who worked tirelessly since 2004 under the leadership of Dorothy Willsey to advance the mission of NAHOF valued the willingness of Colgate University and Morrisville State College to host induction and commemoration ceremonies in 2005, 2007, 2009 and 2011. But there was a felt need to locate these events in Peterboro at the Smithfield Community Center because of the historic importance of both building and place to the history of abolitionism. As an indication of this, the Smithfield Community Center was placed on the Madison County Freedom Trail and the National Register of Historic Places of the National Park Service. 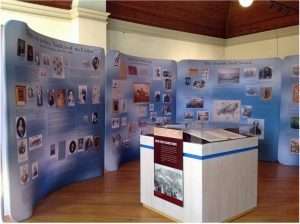 The vision of having a dedicated space for NAHOF events became a reality in 2013 when Elijah Parish Lovejoy, Myrtilla Miner, John Rankin, and Jonathan Walker were inducted at the Smithfield Community Center. The NAHOF museum was now open on the second floor and, as if to honor the occasion, the Smithfield Community Center exterior received a new coat of paint. Beriah Green, John Gregg Fee, James W. C. Pennington, and Angelica Grimké Weld were inducted in 2016. Samuel J. May, Frances Ellen Watkins Harper, and Laura Smith Haviland entered the Hall of Fame in 2018. No inductions were made in 2020 due COVID concerns. Inductions of three abolitionists: Calvin Fairbank, Robert Everett, and Stephen Myers are planned for October 2022.

The public may nominate abolitionists (persons active in 19th-century American abolitionism) by using a form available at the NAHOF’s website.

Induction ceremonies occur every other year in October close to the day in the month when abolitionists organized the New York State Anti-Slavery in October 1835.

So come to Peterboro, in person or in spirit, where in the words of that old abolitionist hymn written by William Lloyd Garrison, you can sing, “I am an abolitionist! I glory in the name.”