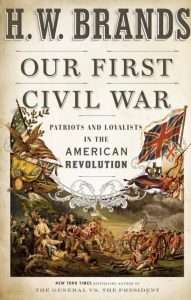 The Jay Heritage Center (JHC) will welcome best-selling historian and two-time Pulitzer finalist H.W. Brands on Thursday, March 24th, for a free virtual conversation about his new book, Our First Civil War: Patriots and Loyalists in the American Revolution(Doubleday, 2021).

An acclaimed historian and professor, Brands is the author of 30 books, including The First American: The Life and Times of Benjamin Franklin and Traitor to His Class: The Privileged Life and Radical Presidency of Franklin Delano Roosevelt – both of which were finalists for the Pulitzer Prize in biography.

His new book, Our First Civil War describes how after the American Revolution, Patriots were cast as heroes and founding fathers while the Loyalists were relegated to bit parts best forgotten.

Our First Civil War looks at how before America could win its revolution against Britain, the patriots had to win a civil war against family, neighbors, and friends, and illustrates how Native Americans and the enslaved were also forced to choose sides as civil war broke out around them.