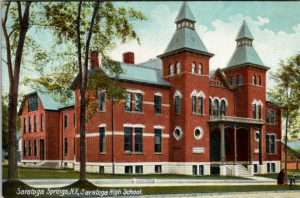 Saratoga Springs has been gifted with many unique attributes by both nature and the hand of man. The artesian fountains have been an attraction since the dawn of habitation and have endowed the area with an important role in the development of our nation.

It’s admirable that residents and interested visitors combine with a fervent dedication to the history of the community. We have recently witnessed this in the efforts by the Saratoga Springs Preservation Foundation to secure a historic residence, designed and built in the nineteenth century by Alexander A. Patterson, at 65 Phila Street in the Spa City.

Patterson was civic minded, and a leader in the community which he adopted after emigrating with his parents from Ireland in the 1830s. He was a church trustee and Sunday-school superintendent, member of the Board of Education, and involved himself in statewide politics. He and his wife raised five children in the Saratoga home he built before serving as an artillery Captain in the Union Army. Patterson was reputed to possess a remarkable memory, which no doubt was important in designing structures, and professionally he was involved in major construction projects.

By the late 1870s the nation had developed to the point where many had a portion of their income set aside for vacation enjoyment. Entrepreneur John H. Starin operated an extensive steamboat transportation network in New York Harbor. He perceived an opportunity to establish a recreation area, in the vicinity of Gotham, for hard working folks in the nation’s largest city to enjoy.

Starin hired Alexander Patterson to plan this site, and construct the buildings, at what may have been America’s original theme park. This playground would be known as Glen Island, and was located in Westchester County, just off shore in the New Rochelle Harbor on Long Island Sound. Glen Island was actually a small archipelago of five islands, linked by over-water walkways, with each island having a unique feature.

The pleasure seekers needed to arrive and depart by one of Starin’s excursion vessels, and from the piers in Manhattan and Brooklyn, the travel required around 90 minutes to navigate up the East River, through Hell’s Gate and onto Long Island Sound. To vacationers of that era, a three-hour-cruise was a desirable component of a day out of the crowded, sweltering and noisy city.

Patterson had charge of design and construction of the Starin plant, which included a ferry building, billiard hall, bowling alleys, and a rifle range. The Park also included a zoo and small cottages with creeping and hanging vines, extensive flower beds, statuary, fountains, and boating and swimming areas with entry structures and lifelines. A very popular part of the experience was the large clubhouse with an octagonal bar and dining hall where sumptuous Rhode Island style clambakes were served. Starin’s amusement park and excursion vessels were a big success, and a New York Times reporter who had visited the site applauded the experience in the March 27, 1881 issue, “The extensive improvements have been made under the direction of Mr. A.A. Patterson, Mr. Starin’s architect.”

Later that same year the New York Globe wrote on September 2nd, “Mr. Patterson, the architect, to whom wise judgment, skilled ability and open purse, Glen Island presents the appearance it does today. Mr. Starin may consider himself fortunate in securing the services of this gentleman, whose wide experience in this and other countries enables him to plan the cozy little cottages which are scattered over the Island.”

The growth of Saratoga Springs by 1875 required the need of a building large enough to serve as the High School, and a former gas storage facility was purchased on Lake Avenue at the intersection with Hodgeman Street, where the Fire Station now stands. This repurposed facility, known by the less than admirable name of the “Old Gas House,” reeked with the smell of its former use, posing difficulties for students and faculty. A temporary facility on Caroline Street was secured during construction on the Lake Avenue site, where the Gas House was razed and a new building designed by Alexander Patterson was constructed. The High School stood opposite the State Armory, and typical for the time was constructed of wood and clad with masonry. The scent of sawdust and curing mortar was a welcome improvement when it opened in 1884.

Patterson owned several properties on Phila Street, and realized from his close proximity to the existing Congress and Hathorn springs to his south and the Putnam Spring to the north and directly across the street, that perhaps he could tap the subterranean mineral stream beneath the village. During the summer of 1881 he began his borings near the intersection of Phila and Putnam Streets. His conjectures proved correct, and in 1886 a viable spring was produced. During the ensuing years, Patterson constructed a pavilion of his own design above the spring on Phila Street. 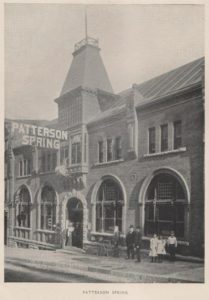 The Patterson Spring drink hall was a handsome edifice, with many pleasing details. An arcade of decorative aches was applied to the street level windows and entry, with a corbelled brickwork-supported center turret, which employed a patterned brick upper level surmounted by a pyramidal roof, all elements of the High Victorian Gothic style which Patterson favored and previously used in Saratoga’s High School building. The inside of the Patterson Pavilion was equally impressive; with no second story the ceiling soared to forty feet above the large and welcoming great room.

The product of Patterson’s cistern met great success, and was a most delicious drink of mineral water, considered a powerful cathartic and a grand appetizer. The local daily noted that chatter among the ladies at the nearby United States Hotel focused on the Patterson Spring waters’ ability to induce deep and restful sleep. Besides being a tonic for insomnia, these waters were also said to be able to restore the nerve of gamblers who had been hit hard at the track or faro table, and gave them the verve to try, try again.

In 1889 Harry M. Levengston began construction of a stately building for his Saratoga Baths, directly across Phila Street from the Patterson Spring. These two Gilded Age operations would complement each other, as well as the hotels on Broadway, just a block away. Both properties were able to survive the scourge of Gottfried Walbaum, whose nefarious management of the race track hurt so many in the 1890s, and were ready for the return of prosperity brought by William C. Whitney’s syndicate in 1900. The Patterson Spring drink hall would occasionally be used as an exhibition area, especially in conjunction with conventions. 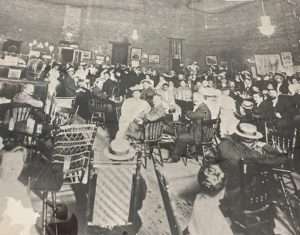 Alexander A. Patterson died at his home at 65 Phila Street on October 14th, 1902; his wife Louisa had passed away the year before. Their heirs continued operation of the Patterson Spring until it was acquired by the State of New York and absorbed into the Saratoga Reservation in 1911, which sought to preserve and protect the natural fountains of the Spa.

New York State made a shift in the management of the Saratoga Reservation in 1916, placing the organization under the Conservation Commission. When this revised administration completed the bath houses on South Broadway, both the Patterson Spring drink hall and the Saratoga Baths on Phila Street were consigned to laundry duty in order to support the newer facilities.

These older buildings, designed for other purposes, were ill suited for this use. The heavy rotational equipment in the Saratoga Baths quickly destabilized the foundation, which resulted in the regrettable demolition of the building. In 1920, under state auspices, laundry equipment was installed in the basement of the Patterson Spring Pavilion, and the marvelously illuminated high bay was converted into a garage and workshop.

In late 1923 a mechanic, Francis S. Heslin, an employee of the Conservation Commission who was using an oxygen torch, was killed in an explosion at the Patterson Pavilion. The November 6th Saratogian reported, “The force of the explosion blew out every window in the building, wrecked sections of the brick wall and interior partitions, cracked and crumbled glass in windows of buildings on the opposite side of the street.”

Just the previous month, on October 27th, 1923, the High School designed by Alexander Patterson on Lake Avenue burned to the ground. After nearly forty years of use, the community had outgrown these quarters, and a new replacement school building was under construction at the intersection of Lake Avenue and Regent Street. The new building was scheduled to replace the old structure in autumn 1924, but fate took a hand. A fire erupted in the chemistry room on the upper floor of the older building on a Saturday morning, with no one inside. Fireman quickly arrived but found the water pressure insufficient to reach the upper story and roof. The Fire Chief and the City Engineer debated the hydrant situation for years on the pages of the local daily, the upshot being ashes and loss of irreplaceable links to the past.

The Patterson Spring drink hall on Phila Street remained in the inventory of New York State until 1942, when it was demolished by labor provided by the Work Projects Administration, better known by the familiar depression-era acronym WPA. This location is presently occupied by a Saratoga Springs Municipal Parking Garage on the block formed by Spring, Putnam and Phila Streets. So much of Alexander Patterson’s legacy has been lost that it is exciting to be part of preserving his former home at 65 Phila Street.