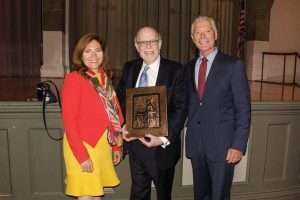 The New York State Library has recently acquired the complete works of Lincoln scholar and Archives Partnership Trust Board Member Harold Holzer. The collection covers his 49-year career as a writer, lecturer, and historian specializing in Abraham Lincoln and Civil War era.

The collection includes the research files and typescripts from Holzer’s 55 authored and co-authored books; more than 150 original lectures; photo files covering the development of the Lincoln image, and the art and iconography of the American Civil War; audio and video recordings of Holzer’s many television and radio appearances; and Holzer’s original correspondence from some of the leading historians, political leaders, and performers of the late 20th and early 21st centuries.

Holzer’s donation comes on the 30th anniversary of his appointment to the Board of the New York State Archives Partnership Trust. He was awarded the Empire State Archives & History Award in 2017.