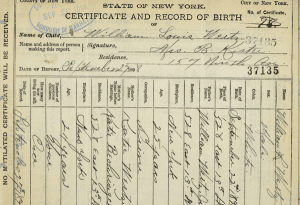 The New York City Municipal Archives has been working to digitize the millions of birth, marriage, and death records it holds since 2013. With the project now 70% complete, 9,318,625 digitized records from the 1860s to the early 1900s are already available online.

The completely digitized collection will include records of birth (1866–1909), death (1862–1948), and marriage (1866–1949). The new vital records was released following legal efforts by Reclaim The Records, and is based on an index created by the Genealogical Federation of Long Island (GFLI) who used the microfilmed card file to create the indexes.

If you know the certificate number and year, it is easy to search, view, and download and/or print the color copy at no charge.

Search by name is also available if you know the exact name and year (the site does not currently account for spelling variations in names).

If you are unable to find the materials you need using the name search, other indexes exist to help you identify the certificate number.

Using the database at the German Genealogy Group site – https://www.germangenealogygroup.com/ – you can search via exact names, sounds like, and wildcards. You should be able to find most people that way, and then be able to search using the certificate number.

You can also search the indexes at FamilySearch.org (free), which were created from a microfilm version of the records. FamilySearch’s index goes beyond certificates and includes ledger entries as well:

If you are still having trouble finding the records, you can search the indexes at Ancestry.com (paid). Ancestry’s indexes include marriage license files (a separate record series from the marriage certificates):

To see if a record is digitized, use the site tab Digital Vital Records, and then select the tab for Birth, Deaths, or Marriages.

Marriage records between 1908 and 1937 come in two different record collections, certificates and licenses and you should check both series. The NYC DORIS website has an explanation of these materials, and you can also see City Clerk’s Marriage Licenses, New York City, 1908-1937: One of 20th-Century Genealogy’s Best Primary Sources by Leslie Corn, CG, FGBS.

The Municipal Archives is one of the largest repositories of government records in North America. The world–class collections span four centuries and include historical records of all three branches of New York City municipal government—executive, legislative, and judicial.

The Municipal Archives highlights include 9.3 million historical vital records, more than 2 million still images and thousands of hours of film and video footage, 400 years of legislative and mayoral documents, and the most comprehensive collection of records pertaining to the administration of criminal justice in the English–speaking world. Documentation of the city’s infrastructure include the exquisitely detailed drawings of the Brooklyn Bridge and Central Park, two of the greatest public works achievements of the 19th century. The Archives online gallery provides research access to all digitized holdings.

Hat tip to , who sent this news along to New York Almanack. They have a blog post with more details about these records here.

Photo of a NYC Birth Certificate provided by the New York Genealogical and Biographical Society.