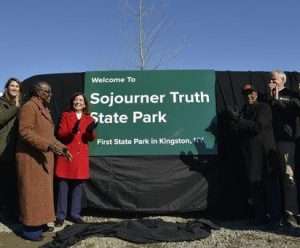 Governor Hochul has announced that a new State Park to open to the public later this spring in Kingston, Ulster County, NY will be named for 19th century African American abolitionist and suffragist Sojourner Truth.

Covering more than 500 acres and a mile of Hudson River shoreline, this park was once an industrial site for production of cement, quarry stone, and ice harvesting. Sojourner Truth State Park will be first new State Park since 2019.

The Governor said the naming, which capped off Black History Month, reflects the state’s commitment to the diverse stories of its people and to Truth’s enduing message of freedom and equality.

Sojourner Truth State Park already includes the Hudson River Brickyard Trail, which opened in December 2020 as part of the Empire State Trail and the Kingston Greenline.

This season, State Parks is expected to install limited parking and hiking trails in the new park to provide public access for passive recreation.

Under an agreement, State Parks, Scenic Hudson, and the Palisades Interstate Park Commission will collaborate and solicit public input on how the park will be developed. Scenic Hudson, which led the way in protecting the unique open space, will operate the park under a five-year agreement.