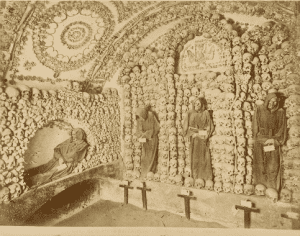 In the summer of 1867 Mark Twain visited the Capuchin Convent and recorded his observations of the crypt’s “picturesque horrors” in The Innocents Abroad. What the novelist witnessed were arches built of thigh bones; pyramids constructed of “grinning” skulls; and other structures made of shin and arm bones. Walls were decorated with frescoes showing vines produced of knotted vertebrae; tendrils made of sinews and tendons; and flowers formed of knee-caps and toe-nails.

Church authorities did not intend to create a macabre display (although there appears to have been creative delight in laying out the ossuary). The exhibition of bones served as an allusion to the passage of time. A plaque in one of the chapels reads “What you are now, we once were; what we are now, you shall be.”

Throughout history, painters have been captivated by themes of mortality. Medieval artists were the first to fuse moral message with artistic virtuosity. An often grisly artistic fascination with death has remained virtually unaltered. The macabre does not change. 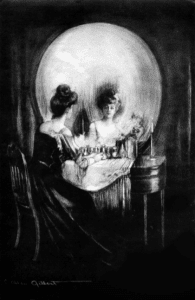 In 1894 Charles Allen Gilbert left the Art Students League of New York and enrolled at the privately run Académie Julien in Paris (the school attracted a large number of American students). After his return from France, he settled in New York and embarked on a career as an illustrator of books and posters. His contributions were frequently published in leading magazines such as Harper’s, Atlantic Monthly, and others.

Working from a residence-studio at 39 West 67th Street, Gilbert produced a range of plates, but as an artist he is remembered for one particular image. In 1902, Life magazine published his drawing “All is Vanity.” To evoke an allegory of death he used the ploy of double imagery.

At first sight, the drawing shows an elegant woman gazing into a mirror as she is seated at her dressing-table (the title is a pun as this type of table is known as a “vanity”). When looked at closely, the round mirror turns into the image of a human skull. The bottles lined up on the table are suggestive of its teeth. A single candle on the edge of the table is a stereotype element of “memento mori” (remember death) paintings; the bunch of flowers is another stock theme. Once cut from the root, they will soon wilt and die.

Gilbert’s drawing is a comment on an emerging world of advertising. In the midst of growing prosperity, big cities developed a passion for fashion. The blending of art and consumerism became an issue. The focus of attention was on liberties taken by display designers at big department stores that lured lines of voyeurs. The more suggestive the “tableaux” on show, the more clients were tempted to enter the house.

Advertising distorts reality. Gilbert’s image touched upon a topical issue by which women were used as sexual eye candy in order to sell products. The woman staring into the mirror resembles nearly every other female seen in advertisements of this era. Vanity is a lady preoccupied with her own facial beauty. In the end only the skull remains.

Man is a Bubble 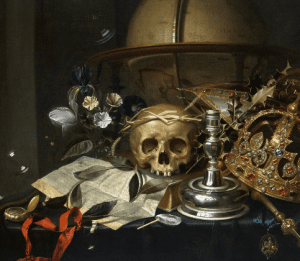 Still-life painting emerged as an art form in the Low Countries in the early seventeenth century. Its origins can be traced to the masterly crafted details in paintings by artists like Jan van Eyck, Hans Holbein, and others. The genre included “vanitas” paintings. Based on Ecclesiastes 1:2 (“Vanity of vanities … all is vanity”), it contemplated the brevity of life and the frailty of man – homo bulla (man is a bubble) in the words of Erasmus. In symbolic terms, transience was represented by skulls, clocks, smoking candles, and/or fading flowers.

Still life paintings were appreciated for both striking details and “hidden” messages. There lies the paradox. The “vanitas” painter depicts objects suggesting the impermanence of all endeavors whilst at the same time inviting us to marvel at the display of artistic skill.

During the late seventeenth and early eighteenth centuries the “vanitas” still life flourished briefly in Britain. After the execution of Charles I in January 1649, a contemporary dimension was added to the genre by including pointers to the king’s troubled life.

The earliest example may have been created around 1650 by Hendrick Andriessen, a Catholic artist working in Antwerp. In his painting not a single object is without meaning. The skull, bubbles, extinguished candle, flowers, and glass vase, all speak to the fragility of life; the watch, its hand positioned near midnight, symbolizes the final reckoning. The addition of crown, scepter, and medal of St George (patron saint of England) allude to the fate of Charles I. The centrally-placed skull feels like a portrait of the dead king leering at the viewer with a frozen stare.

There was a ready-made market for images referring to the king’s beheading among the community of exiled English Royalists in the Low Countries. His skull was a seller. 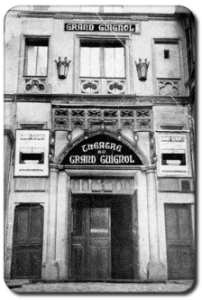 The 1890s were obsessed with themes of morbidity, both in art and “entertainment.” At the Cabaret du Néant in Montmartre, visitors entered a darkish chamber lit by wax tapers suspended on a chandelier composed of human bones. Welcomed by waiters dressed as undertakers, they were seated at tables made of coffins. Images of carnage adorned the walls. After drinking “les microbes de la mort,” guests would be directed to the Hall of Incineration where a member chosen from the audience was placed in an upright coffin. Using a projected image, glass and mirrors, an illusion was cast as if that person was slowly decomposing and turned into a skeleton.

In Paris, dramatist Oscar Méténier (the son of a police commissioner) made his name with plays set among vagrants, criminals, and prostitutes. In 1897, he bought a small theater at the end of the Impasse Chaptal, a cul-de-sac in the Pigalle district. Named Théâtre du Grand-Guignol (Big Puppet), the playhouse had originally been a chapel and contained only 293 seats; two large angels hung above the orchestra; and the neo-gothic boxes with iron railings looked like confessionals.

The performance of Mademoiselle Fifi (based on the novel by Guy de Maupassant) presented the first ever prostitute on French stage. The play was temporarily shut down by the authorities. Méténier was aware that there is no such thing as bad publicity and the theater became an instant triumph. Step by step a new genre was established.

In 1898 Max Maurey took over as director and turned the theater into a house of horror. He introduced the playwright André de Lorde, “Prince of Terror,” who turned madness and mania into popular themes of performance. Night after night, spectators would stare in fear and fascination as screaming heroines were lowered into acid vats; as eyeballs were bisected by long silver blades; as bodies were torn limb from limb. Maurey measured the success of a play by the number of fainted visitors. 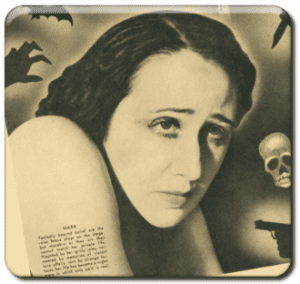 From 1914 to 1930, the theater was directed by Camille Choisy who launched the career of Paula Maxa, the “Sarah Bernhardt of the Impasse Chaptal.” The actress died countless deaths on stage. She was shot, scalped, whipped, raped, guillotined, hanged, quartered, burned, cut apart with surgical tools, stung by a scorpion, poisoned with arsenic, devoured by a puma, strangled by a pearl necklace, and kissed by a leper. She was the world’s most assassinated woman.

The Second World War dealt a final blow to the playhouse. Buchenwald had turned imaginary staged cruelty into the actuality of barbaric behavior. Reality stifled fiction. 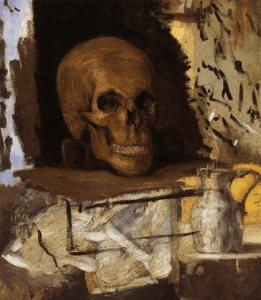 When Gilbert arrived in Paris, he found himself surrounded by skull imagery. In 1886, living in Antwerp, Vincent van Gogh created a “Skull of a Skeleton with Burning Cigarette.” Paul Cézanne was captivated by skulls and incorporated them in numerous still life paintings. His “Pyramid of Skulls” (c. 1901) depicts four human skulls stacked in a pyramidal formation. The subject matter preoccupied him throughout his life. 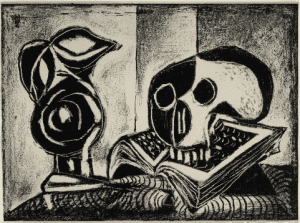 Pablo Picasso kept a skull in his studio. In February 1946, he produced the print “Black Jug and Skull.” The depicted scene is sombre and restrained. The wine jug relates to the impermanency of pleasure; the skull is a reminder of the inevitability of death. The image stands in an artistic tradition that is directed against the madness and suffering of war.

The vanitas genre in painting has remained current. Although predominantly a European obsession, Charles Allan Gilbert may be seen as an intermediary to the work of Andy Warhol whose art was imbued with an acute sense of life’s briefness. Warhol tended to express the passing of time through the associative idea of fame and fortune.

In a series of screen-printed images of iconic personalities he suggested that means of mass communication reduce the individual to the level of a commodity. The shining presence of heroes is short-lived. Icons fade out, they decline, disappear in obscurity, or die while alive. Time is an executioner. 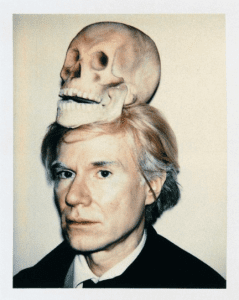 Death and dying were very real issues in Warhol’s life. Valerie Solanas was a dramatist who was haunted by a paranoid suspicion that the painter had stolen the manuscript of one of her plays. On June 3rd, 1968, she entered his sixth-floor office at 33 Union Square West, carrying two guns. She shot him, but doctors were able to revive the artist although he suffered long-term health problems as a result. 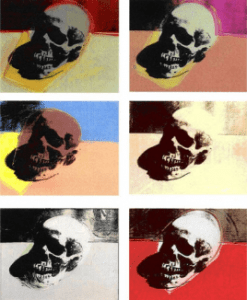 This near-fatal attack deepened Warhol’s fascination with mortality and directed his attention towards the ‘memento mori’ genre. There is a photograph of him wearing like a crown a human skull he had bought in Paris in 1975. He made his purchase the subject for six “Skull” canvases (1976) that were created at his Manhattan studio, known as the Factory.

Displayed together in a vertical grid of three rows of two, each panel reproduces the same photographic image of the skull resting on a flat surface. By clearing the table of all traditional symbols of transience, the painter presents just the skull without any preconceived connotations, thus giving the topic a postmodernist twist.

The buoyant red, yellow, blue, and purple colors remove all macabre associations. The vivacity of color turns the traditional caution of “momento mori” into a death-defying statement.