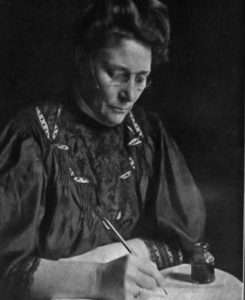 Laura Smith Ellsworth, a self-proclaimed spiritualist, medium and clairvoyant physician who would devote her life to spiritualism, grew up in Charlton, in Saratoga County, NY. The daughter of Henry and Jane Smith, the youngest of their three children, Laura was born in 1862 and baptized in September of the same year at the Charlton Freehold Presbyterian Church.

In 1884, Laura left the family farm and married Elmer Ellsworth, a nineteen-year-old farmer from the town of Ballston. This couple had their first child, Effie K. in 1890, and soon were living on a farm in Saratoga Springs. It was seven years later on October 30th, 1897, that the first announcement of Laura Ellsworth’s abilities as a medium was made public in the Mechanicville Saturday Mercury:

“Mrs. Laura Ellsworth, the clairvoyant, is reported to be doing a large business at her rooms at Bradford St., where she is consulted by businessmen, factory girls, and people of all classes. Her receipts are reported to be about $10 an evening. The girls inquire especially as to the men they are doomed to marry.”

Laura Ellsworth was successful enough in her work as a clairvoyant that by 1899 she had a room each month at the Grand Central Hotel in Mechanicville. Using the name Mrs. L. Smith Ellsworth, she offered the diagnosis of disease-free of charge, with readings to cost one dollar.

During this time the Mechanicville Daily Mercury reported that her rooms were filled and “all were pleased to go away with their readings.” Laura Ellsworth’s abilities as a clairvoyant gained public attention when she was called upon to help locate the body of a drowning victim. Early on Saturday, May 4, 1901, Farquhar McLennon and Charles M. Arnold, Jr., of Ballston Spa took advantage of a day off from their jobs at the National Folding Box Company and rode their bicycles to Saratoga Lake for a day of fishing. Arriving at the lake, they obtained use of a large, flat-bottomed boat, the owner instructing them to only use one of the two anchors when they got to their destination.

Shortly after ten in the morning, a passerby noticed an overturned boat floating off Stony Point, but as it was common practice for one to be sunk to allow the planks to swell, nothing was done at that time to investigate. The first alarm was raised after the two young men did not return home that evening.

As it was immediately evident that both had drowned, a search was begun that quickly turned up the body of the 23-year-old McLennon 35 feet south of where they had overturned. Despite two days of searching using grappling hooks and dynamite, the body of 18-year-old Charles Arnold could not be located. Ten days later Laura Ellsworth was consulted by friends of the young man, and visiting the scene of the accident, she quickly directed them to the location of his body. When the search was made, he was found exactly where she had predicted, with newspapers across the Northeast reporting the news.

Laura’s work as a clairvoyant continued to bring success, and soon she was extending her services into Glens Falls, announcing her arrival with this advertisement in the March 7th, 1902, Glens Falls Times:

“Trance and Business Medium. Mrs. Laura Ellsworth of Saratoga Springs, NY, will be at the Van Cott for a few days, beginning Tuesday, March 4th, where she will give life readings to those who wish to consult her. Will also diagnose all diseases for those who are sick and need her advice. Mrs. Ellsworth’s physic vision is very clear, and she is upright and honest in her spiritual belief. Room 14, Van Cott Hotel, South St.”

Laura Ellsworth again extended the reach of her clairvoyant expertise by publishing the book The Wayside of Life, in 1906. It is a book of “poem, essay and paragraph” that was written ostensibly while she was under spirit control and unconscious of what was being written or spoken.

Laura Ellsworth separated from her husband by 1908 and moved to the City of Schenectady with her daughters Effie and Jean. For the next 12 years, she continued to offer her services as a clairvoyant or spiritual medium in that city, though she never again advertised in local papers.

By 1922 Laura was on the move again, this time to Rochester, New York with her daughter Jean, and Jean’s husband Ernest. In Rochester, Laura served in several Spiritualist Churches over the years. She also did private consultations as a spiritualist. Laura lived to the age of 96, passing away on March 17th, 1959, in Beechwood, Monroe County, New York.

Photo of Mrs.Laura Smith Ellsworth courtesy The Wayside of Life, 1906.