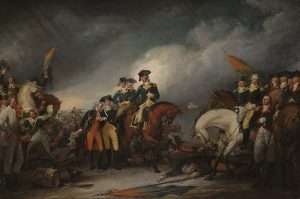 The term “Hessians” refers to the approximately 30,000 German troops  – about a quarter of British land forces – hired by the British as auxiliaries during the American Revolution. The term typically refers to all Germans who fought on the British side, because 65% came from the German states of Hesse-Kassel and Hesse-Hanau.

Often considered mercenaries, and so mentioned in the Declaration of Independence, they were actually hired-out to the British by their own governments. They served in their own units and uniforms, under their own leaders and were heavily used in the Northern Theater of the war, most notably in New York. About 5,000 Hessians stayed in America after the war ended.