Having produced over thirty photographically-illustrated books, he established himself as a pioneering figure in photographic art. Yet, by the time of his death in 1972, his name and reputation were almost completely forgotten. 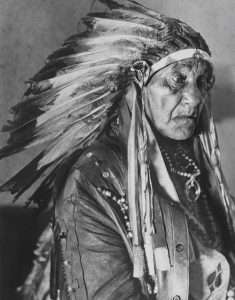 Hoppé was born on April 14, 1878 in Munich. His father, a prominent banker, was of French Huguenot descent. Soon after his birth the family moved to Vienna where Emil began his formal education which he completed in Paris and Munich. His artistic inclination became evident in 1893 when he took up painting classes with Hans von Bartels, a leading watercolor marine artist who was associated with the Düsseldorf School.

Following in the footsteps of his father he moved to London in 1903 to work for Deutsche Bank in Lombard Street, but after a friend had given him a camera he turned what was originally a hobby into a career. A young man with a pan-European identity, Hoppé became a photographer who was always on the move, a restless observer and traveler.

Having been elected a member of the Royal Photographic Society in 1903, he began exhibiting at the Society’s annual salon from 1905 onward. He also acted as the London correspondent to various German-language photographic journals. In October 1907, he opened a studio at 10 Margravine Gardens, Baron’s Court, in Fulham. He was naturalized a British citizen in 1911.

When his career as a portraitist took off, he rented larger premises at 59 Baker Street. With the arrival of Sergei Diaghilev’s sensational Ballets Russes in London (the group included Vaslav Nijinsky and Tamara Karsavina), Hoppé was chosen as the company’s exclusive photographer from 1911 onward.

In 1913 he moved his studio to 7 Cromwell Place, South Kensington, where he occupied all thirty-three rooms. He named the property Millais House after a previous resident, the Pre-Raphaelite painter John Everett Millais. When Hoppé vacated the property in 1937, another photographer moved in – Gordon Anthony, brother of Ninette de Valois, the “godmother” of Anglo-Irish ballet.

In 1943, Dublin-born painter Francis Bacon occupied the ground floor of the house and converted the billiard room into his studio (which doubled up as a venue for Bacon’s illicit roulette parties). 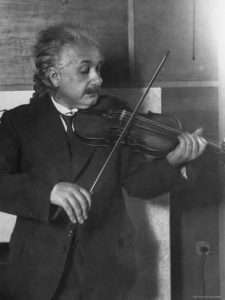 By the 1920s Hoppé had established himself as a celebrity portraitist His sitters included Augustus John, George Bernard Shaw, H.G. Wells, Thomas Hardy, Rebecca West, Ezra Pound, T. S. Eliot, and Rudyard Kipling, as well as some prominent European figures such as Leon Bakst, F.T. Marinetti, Benito Mussolini, and Max Reinhardt. In 1921, he was invited to photograph Queen Mary, King George VI, and other members of the Royal family. The resulting images were widely disseminated.

His business prospered, allowing him to open a New York branch of his studio on 57th Street which he occupied for four months of each year between 1919 and 1922. Mainly through the friendship of Christian Brinton (known locally as St Brinton for his promotion of the careers of émigré artists), he was introduced to numerous prominent New Yorkers.

Writers Robert Frost, Theodore Dreiser, and Carl Sandburg sat for him, and so did artists Robert Henri and Max Weber. Lillian Gish, Tom Mix, Paul Robeson, and Jack Dempsey paid a visit to his studio. Albert Einstein brought his violin. President Calvin Coolidge also posed in front of his camera. Hoppé’s portraits constitute a Who’s Who of personalities in the arts and politics in Britain and America between wars.

On August 16, 1920, The New York Times announced the photographer’s arrival in the city on Cunard’s steam ocean liner Caronia. The photographer was reportedly in search of beauties for his widely advertised Book of Fair Women (1922). He had made the journey at the request of newspaper tycoon William Randolph Hearst who insisted that American women be included in the book, in particular his mistress and protégée, the film star Marion Davies.

In 1921, merchant “prince” John Wanamaker who ran an art gallery in his superstore at Broadway and Ninth Street put on the photographer’s first major exhibition in the United States.

Financially secure (the former banker was an artist-entrepreneur who was happy to sell his skills to advertisers), Hoppé turned his attention to travel, capturing topographic views in Germany, Italy, Ireland, Japan, South America, Australia, New Zealand, India, and Jamaica. The photographer took on the role of vanguard explorer by mapping the “types” of the world.

Travel and photography grew alongside each other. With the expansion of globetrotting opportunities, the technology of capturing experiences on camera also improved. When in 1900 George Eastman introduced from his workshop in Rochester, New York, the Kodak Brownie to the world (with the company slogan: “You press the button, we do the rest”), he revolutionized photography.

During the first decade of the twentieth century, Alfred Stieglitz’s Photo-Secession in New York, the Linked Ring in London, and Bauhaus in Dessau, responded to the amateur snapshot craze by promoting photography as a fine art. As co-founder of the Salon of Photography in 1910 (successor to the Linked Ring), Hoppé supported the aesthetic ambitions of these professional groupings.

By the late 1920s renewed interest was expressed in photography as documentation. In 1932, American sociologist Lewis Hine published Men at Work, a book illustrated by rotogravures of modern engineering in an attempt to document the “toil of men” in contemporary society. Hoppé had been in the forefront of this tendency with his publication of Deutsche Arbeit in 1930.

The artist spent a good deal of time outside his studio, roaming the streets of London, whilst taking pictures of cleaners, street vendors, and local characters. In order to photograph urban scenes unobtrusively, he wrapped a fixed-focus “Brownie” in a paper bag with a slit for the lens. It enabled him to capture images with unadorned spontaneity. He used the same ploy in New York.

The suave European who had spent his younger years in Vienna, Munich. Paris, and London, was delighted to encounter New York’s diverse population. It was as if part of the Old Continent had been transposed to this multi-linguistic metropolis of relentless pace and boundless energy. His camera recorded what he observed on his promenades around the city. He took it all in with the open mind of an aloof spectator (flâneur) of urban society. 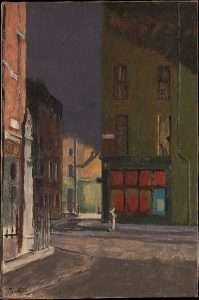 The only occasion that his New York cityscapes were exhibited together was in January 1922 as part of a show called New Camera Work, mounted at the Goupil Gallery on London’s Regent Street. The relatively large one-man exhibition of 221 images was an overwhelming success. Novelist John Galsworthy wrote the catalogue’s introduction and record audiences viewed the touring show.

The exhibition included twenty-eight human documents taken in London and New York. There was also a series titled “The Soul of Gotham” which consisted of thirty-nine photographs. Whilst fellow professionals attempted to capture the pulsating stream of New York’s urban life, Emil presents his audience with images that communicate emptiness and loneliness. In his view of Lower Broadway, human presence has been completely excluded. In other streetscapes figures appear almost by accident, being reduced to insignificance in the mass of “abstract” construction.

Even the teeming tenements of the Bowery are presented in scenes of silent desolation in which human beings are absent. Only barrels in an empty courtyard, clothes lines, and mute shop fronts suggest habitation. These shots suggest a (Hopper-like) sense of abandonment and repose. Stillness pervades – the paralysis of hardship.

Visitors at the time tended to describe New York as a hectic commercial emporium rather than a city of integrated self-awareness. Hoppé was one of those outside observers. His cityscapes express the mixed sentiments of awe and anxiety. Wonder about man’s technical ability to control the built environment; anxiety about the diminished place of the individual within the mass of colossal structures. Delight at the coming together of a diversity of peoples; concern that the metropolitan conglomeration of cultures may disintegrate into a “chaotic den of discord” (Thomas Carlyle’s phrase to describe London in the early 1830s).

Hoppé found inspiration in painting. His cityscapes resemble those of London’s Camden Town Group of artists who, from 1911 onward, met at the studio of Walter Sickert. These painters were interested in the systems and structures of the city to the point of excluding human presence. Their images were harsh and full of anxiety.

That sense of crisis was not caused by war or depression, but by the relentless pace of change that had shaken society. In the treatment of their subjects painters projected the vitality of the city, but also expressed unease that the city-dweller’s personality had declined. In poetry a similar line of reasoning can be traced. In Eliot’s The Waste Land the city is delineated as a habitat of chaos and corruption.

Rapid urban transformation had drained the fullness out of life. 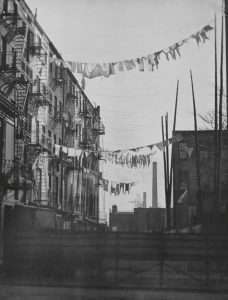 Hoppé produced approximately four hundred “American Types”; many of those were images of New York City residents, immigrants, down and outs, or derelicts. They were part of a much larger grouping of human documents. The choice of the term “type,” very much current at the time, turned out to be somewhat unfortunate.

Anthropological typology was the categorization of human species by races based on observable traits such as head shape, skin color, or stature. The model was built on the (now discredited) assumption that humans from different ethnic regions can be assigned to a race because of similar physical traits.

In the typologist’s handbook, every individual belongs to an enduring essence. Variation therefore is coincidence and irrelevant. Throughout the modern era, “objective” photography was enlisted to classify the world and its people, turning type into stereotype.

That makes Hoppé’s way of working paradoxical. In the photography of individuals his aim was to produce work in which character prevailed, not flattery or type. Looking for uniqueness, he would try to get around appearance by immersing himself in the subject’s world, reading their books, or going to see their films or plays, before taking their portraits.

The classification system used in many of his publications however was determined by the principle of type. It was what the “market” expected from photo books. One may even question if Emil took an active part in shaping his books (many of those were commissioned by publishers). He was seemingly indifferent towards past activities as he was always engaged in new projects.

This argument is substantiated by his decision in 1954 to sell five decades of work to a commercial London picture library archive known as the Mansell Collection. Founded by William Axon Mansell, this firm of art photographers and fine art printers had been trading since the 1870s from large premises in Oxford Street. Within this massive archive, his pictures were filed by subject matter, not by name. His work was “lost” as it became inaccessible to curators and historians. When Hoppé died in London in 1972, his name had been forgotten.

In 1997, the Mansell Collection was bought by Time Inc. and transferred from London to New York to become part of the Time-Life picture archive. It contained more than 600,000 pieces (prints, daguerreotypes, and glass plates) dating from the 1870s to the 1940s.

Thanks to patient recovery work carried out by Sydney-born Graham Howe, then curator of a picture library in Pasadena, California, Emil Hoppé’s photographs were uncovered and named, instantaneously inspiring renewed admiration for his work. A pioneer in a medium that for many decades would shape our view of the world reclaimed his rightful place in the critical history of photography.