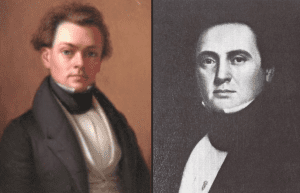 Waterford, NY’s involvement in the Industrial Revolution was more significant than its geographical size would imply. Family-owned and operated business ventures were the norm and usually a first and second-generation operation.

Names that immediately come to the fore such families as brothers Hugh and Canvas White, the Knickerbocker, Kavanaugh, Button, Breslin, and King families all demonstrated the business model of the period; manufacturing firms that employed many hands from Saratoga County and surrounding communities.

During this era, if you lived in Waterford, it’s likely that you worked there as well. Waterford’s success during this era was a combination of its location on the confluence of the Hudson and Mohawk Rivers, the opening of the Champlain and Erie Canals, the King’s Power Canal as well as the three rail lines that serviced Waterford. All of these families were successful, famous in their day, and withstood the tests of time. This is the story of a family that stands out in a stand-out group.

The Eddy Family relocated from Vermont to Waterford to access its available waterpower and branched out into Troy and Cohoes. The first of the Eddy family to venture to Waterford was Isaac Newton Eddy in 1826 with his wife Lucy Tarbell, and their eight children: Sarah, born in 1798; Oliver Tarbell Eddy, born 1799; Titus Egbert Eddy b. 1803; Benjamin Franklin Eddy, b. 1804; Lenora Jane, b. 1807; Thomas Jefferson Eddy, b. 1809; George Washington Eddy, b. 1811; and Walton Meade Eddy, born in 1818. Isaac’s sons, many named after famous Americans, were to carry on the legacy of the family in their industrious endeavors.

Father Isaac had been awarded a patent in 1824 for pulverizing the ingredients used in the manufacture of printer ink. He established the Franklin Ink Works in 1831, using the power of the King’s Canal and the Champlain Canal for shipping. Soon after, his son Thomas Jefferson Eddy, invented the formula to produce colored printers ink.

By 1847 George Washington Eddy established the Hudson and Mohawk Foundry on the northernmost part of the King’s Canal. The family operated this business until 1875 when it was sold to the Knickerbockers. The foundry first produced stoves, iron castings, and steam car wheels. George then invented the famed Eddy Valve for which The Columbian Expedition awarded him a medal in 1893. In 1851 he had been awarded runner-up honors at the London World’s Fair for his car wheels. He passed away in Waterford in 1897.

Oliver Tarbell Eddy was a remarkably versatile citizen: inventor of one of the first typewriters; skilled engraver; and a self-taught painter of portraits and miniatures. Oliver moved away at an early age. From 1826 to 1829, he was lived in the city of New York. By 1831, the family had moved to Elizabeth, New Jersey and in early 1835 to Newark, where he lived until 1841.

In the city directories, Oliver Tarbell Eddy was listed as a portrait painter. By 1842, he had moved to Baltimore, MD, where he remained until 1850. Apparently, the next move, to Philadelphia, PA, was his final one, although there are some who claim he painted in Washington, DC, for a time. In 1950, an exhibition of the paintings of Oliver Tarbell Eddy was shown at both The Newark Museum and The Baltimore Museum of Art. A catalog of his life works was compiled by Edith Bishop of the Newark Museum.

Arguably, the most successful, of a very successful family, was Titus Egbert Eddy. The family’s main stock in trade was lamp black, printers ink, and variations thereof. Titus had a $50,000 per year contract with the federal government to supply the printer’s ink used in producing gold certificates. He operated the business out of the basement of his mansion in Troy with just six employees. The formula for the ink was a secret known only to Titus and his son James.

The historic home of Titus Eddy known as the Glenwood Mansion or the Eddy Titus Estate, was placed on the National Register of Historic Places in 1973. Today the home serves as the offices for the Troy Housing Authority. The James A Eddy Memorial Geriatric Center in Troy gets its name from an endowment from James. It’s commonly referred to as “The Eddy.”