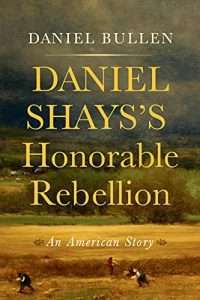 The shots killed four and wounded twenty, marking the climax of five months of civil disobedience in Massachusetts, where farmers challenged the state’s authority to seize their farms for flagrantly unjust taxes.

Government leaders and influential merchants painted these protests as a violent attempt to overthrow the state, in hopes of garnering support for strengthening the federal government in a Constitutional Convention.

As a result, the protests have been hidden for more than two hundred years under the misleading title, “Shays’s Rebellion, the armed uprising that led to the Constitution.” But this widely accepted narrative is just a legend: the “rebellion” was almost entirely nonviolent, and retired Revolutionary War hero Daniel Shays was only one of many leaders.

Daniel Shays’s Honorable Rebellion tells the history of the crisis from the protesters’ perspective. Through five months of nonviolent protests, the farmers kept courts throughout Massachusetts from hearing foreclosures, facing down threats from the government, which escalated to the point that Governor James Bowdoin ultimately sent an army to arrest them. Even so, the people won reforms in an electoral landslide.

Thomas Jefferson called these protests an honorable rebellion, and hoped that Americans would never let twenty years pass without such a campaign, to rein in powerful interests. This riveting and meticulously researched narrative shows that Shays and his fellow protesters were hardly a dangerous rabble, but rather a proud people who banded together peaceably, risking their lives for justice in a quintessentially American story.

Historian Daniel Bullen, author of Daniel Shays’s Honorable Rebellion will speak at Bennington Battlefield on April 2nd at 1 pm. The talk will be given in the Caretaker’s House, located at 30 Caretakers Road, Hoosick Falls. Books will be available for purchase after a lecture and Q&A. There is a suggested $3 donation for those wishing to attend. For further information, contact David Pitlyk at david.pitlyk@parks.ny.gov or (518) 860-9094.