None of these matters preoccupied Henry A. Strohmeyer, Jr., animal photographer, as he positioned himself and his camera to capture a picture of the man of the hour. Son of a famed expert in stereoscopic photography who made a career in capturing images of the estates of the wealthy, Strohmeyer had built his own reputation largely by taking pictures of cows and bulls. He was about to photograph Gerrit Smith Miller who at eighty-four was the oldest and most respected Holstein cowman in the country.

A large crowd, estimated by the press as four to five thousand strong, had come to Peterboro, a hamlet in Madison County, New York, to attend a field day sponsored by the New York State Holstein-Friesian Association. Organizers of the event had invited dairy farm families from far and wide to a celebration honoring Gerrit Smith Miller (1847-1937) and his renowned Kriemhild Herd. They did so by placing a granite boulder with its attached bronze plaque on a small piece of ground that Miller had previously donated to the state Holstein association. Today this marker is the “Plymouth Rock” of the Holstein breed. Miller had chosen the name Kriemhild for his herd from a figure in a German heroic legend.

In 1930 Madison County ranked first in the number of Holsteins of all the counties in the dairy regions of the United States. Though milk and other dairy products from cows still top the list of agricultural products sold in New York State, we have lost many dairy farms in the last decades. In 1905, the peak year, there were approximately 1,540,000 dairy cows in New York State. In 2020 there were an estimated 625,000 milk cows statewide. Nevertheless, the milk yield per cow is significantly up from 1905.

If historical markers could talk, the bolder situated about a quarter mile north of Peterboro, alongside Oxbow Road would speak eloquently of the man and the herd of purebred dairy cattle that he assembled. It was Miller’s mission in life to benefit humanity by making two quarts of milk where there had been one before. 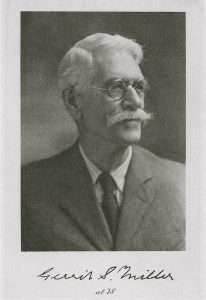 Frank O. Lowden, formerly the Governor of Illinois, was the principal speaker on the afternoon of August 17, 1929. At the time he was president of the Holstein-Friesian Association of America. He told the audience that significant progress had been made during the six decades Gerrit Smith Miller had been a premier dairyman. In 1860 when Miller began to establish his Kriemhild Herd, the typical dairy cow gave, on average, only 1,400 pounds of milk in a lactation period. By 1929 milch cows, that is, cows reared and kept for their milk, were averaging 4,500 pounds a year.

As noted on the bronze plaque attached to the boulder, Gerrit Smith Miller was the first dairy farmer to keep yearly production records for a Holstein-Friesian cow. Dowager gave 12,681 lbs., 8 oz. from March 1870 to March 1871. Accurate record keeping has been the hallmark of the purebred dairy business since. As Lowden pointed out in his speech, a dairyman can only improve the quality of his herd, and therefore the quantity of milk, by careful attention to which animals are the best producers. Though Miller took pride in the volume of milk his cows could produce, he took an even greater interest in their pedigrees.

Gerrit Smith Miller, known to his family as Gat, was an octogenarian in 1929 when the Holstein-Friesian enthusiasts honored him as “the oldest living breeder” of the kind of dairy cattle they favored. Born on January 30th, 1845, in Cazenovia, New York, he moved with his parents to Peterboro within a few years. His mother, Elizabeth Miller, was the daughter of Gerrit Smith, the famous social reformer and abolitionist.

Importations from the Netherlands 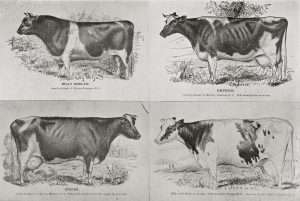 Sometime in the summer of 1869, Gat went over to Europe so that he and his brother Dudley could learn more about the breed of dairy cows that one Belgian author described as Des machines latiers – milk machines. They visited dairy farms in North Holland and purchased their first four animals, a bull and three cows, from the market town of Weener in the Prussian controlled district of Leer in Lower Saxony, Germany. The animals originated in West Friesland, a region in the northwest of the Netherlands. American dairymen would later argue as to whether the famed black and white cows and bulls we see today should be called Friesians or Holsteins.

Once offloaded in New York City, the cattle went by train as far as the depot at Canastota in Madison County, a distance of 337 miles. The final leg of the more than four-thousand-mile trek of these animals from their birthplace in the marshy lowlands of West Friesland may have been the most difficult. They walked from the railroad station at Canastota out along the Old County Plank Road nine miles up the hills to Peterboro.

Gerrit Smith Miller reported that the bull and three cows arrived on October 19th, 1869. Five inches of snow lay on the ground; the animals were immediately barned. The three females, Crown Princess (H.H.B. 6), Dowager (H.H.B. 7), and Fraulein (H.H.B. 9), were soon giving two-thirds as much milk as his existing herd of nine dairy cows. H. H. B. stands for the Holstein Herd Books for registered cattle which Miller edited for many years. 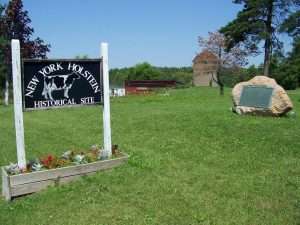 Dowager performed well in the Kriemhild Herd that Miller was building at Highland Stock Farm, although the pasture he was using was “rather poor, the farm being one that had been mismanaged and run down.” Registered as number seven in the Holstein Herd Book, she gave 12,681.5 pounds of milk in the twelve-month period ending March 10th, 1871. One gallon of milk weighs eight pounds, making Dowager’s production equal to approximately 1,585 gallons, or about a half ton of milk a month. This was an astounding record, as dairy cattle at the time typically gave only three or four thousand pounds of milk a year at the time. Small wonder that Dowager is mentioned by name on the plaque dedicated on August 17th, 1929!

Miller obtained many cattle from the Netherlands over the years. In fall 1876 he imported five purebred cows and a bull he named Billy Boelyn (H. H. B. 189). Billy Boelyn was at the head of the Smith’s Gold Medal Herd at the New York State Fair in 1880. When Billy Boelyn died, Smith had his prize-winning bull’s head mounted and hung on a wall in the Miller home. Miller’s house, the former mansion of Gerrit Smith, was destroyed by fire in 1936. This author has been told that Billy Boelyn’s head was saved and passed into the hands of someone on the area. I am still looking for Billy Boelyn.

Illustrations, from above: photograph of dedication by A. J. Strohmeyer, Jr., August 17th, 1929, Gerrit Smith Miller is the first person to the right of microphone; Gerrit Smith Miller at 78 from James D’ Wolf, Old Boston Boys and the Games They Played (Boston: Riverside Press, 1907); four imported cattle including Billy Boelyn, from Frank Decker, Kriemhild Herd: A Chapter in Holstein History. Syracuse, NY: The Author, 1958; and the memorial boulder that sits on a portion of what was Miller’s Highland Stock Farm at the New York Holstein Historical Site by Milton Sernett.