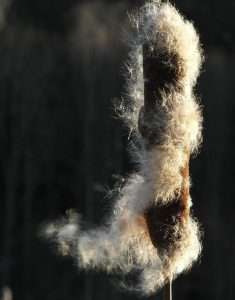 On a winter day, I drove down to a nearby wetland bisected by a town road and walked carefully onto the ice. I was looking for cattail heads to dissect so I could meet the caterpillars who overwinter inside the seed fluff. Many of the cattails I found that day had blown over during the previous week’s windstorm, but there were enough still standing for me to collect two from each side of the road.

Once home with my prizes, I began pulling the cattails into pieces, picking off clumps and teasing them apart into fleecy clouds with my fingers. The two heads from the bigger, more open side of the wetland were frayed and wet, with a patina of algae. But the seeds and fluff inside were still dry. I expected to find lots of caterpillars, like the cabbage worms that plague our Brussels sprouts during summer, but these first two cattails yielded only three pale, stripey larvae and seven dry husks, which could be dead caterpillars or shed skins.

The cattail heads from the smaller side of the wetland, which is nestled into a hill and sheltered by trees, were in better condition, their sausage-like shapes intact and free of algae. I pulled one apart and found several sluggish caterpillars. In total, my exploration yielded 20 caterpillars, ranging in length from about 3 millimeters to 10 millimeters – less than half an inch! And after all of that, I was left with a pile of downy fluff 8 inches high.

I saved the last cattail head in a terrarium outside. If I’m lucky, it too has caterpillars hidden inside, and in the spring, I’ll see the moths emerge.

My interest in cattail winter ecology was sparked by accounts of red-winged blackbirds and chickadees foraging larvae from cattail heads. Pulling apart a cattail head was a lot of work, all to find a handful of tiny caterpillars. The littlest larvae hardly seemed worth the effort. But for a hungry chickadee or a red-winged blackbird returning to breeding grounds while winter persists, the fattest caterpillars might make a tasty morsel, especially at a time of year when insect prey is difficult to find. 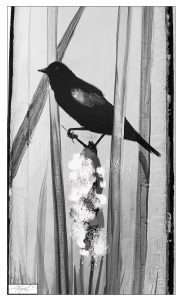 I had asked Sam Jaffe, executive director of The Caterpillar Lab, a caterpillar zoo based in Marlborough, New Hampshire, if he knew of caterpillars living in cattails. “I have collected a number to explore with guests at our winter open-hours and observed the insects within. Small Hemiptera (order of ‘true bugs’) were common as were the shy cosmet moth (Limnaecia phragmitella) caterpillars.” It was Jaffe who recommended I collect and dissect some cattails myself.

Shy cosmet moth caterpillars have brown heads and beige bodies with patchy brown stripes running along their length, a description which matches the appearance of my cattail larvae. They live inside the cattail heads all winter, feeding on the cattails’ prolific seeds – about 220,000 per head – and emerge as adults in the spring. Less than an inch in length, the adult is a demure yellow-tan moth with white-ringed brown spots.

These caterpillars spin silk threads through the cattail head to prevent the fluff from blowing away before winter ends, allowing the caterpillars to use its insulation to stay warm all season long. Bursts of un-blown fluff on a head may indicate that the caterpillars are active inside. I didn’t see any silk threads in the fluff I pulled apart, but several of the larvae dropped and dangled – inchworm style – from invisible threads while I was handling them.

After dissecting a few cattail heads, I’m not surprised these caterpillars have turned them into cozy winter nests. The fluff is as soft and light as down – I had a hard time preventing it from billowing all over my kitchen, especially after my 3-year-old decided to “help” me clean up. Even though the heads were cold and wet on the outside, all the inner fluff was dry, perfect for staying warm through cold, blustery days.

I’ve often seen cattail heads described as resembling sausages on sticks. Now that I’ve found the caterpillars tucked inside, however, cattails seem to me more like down comforters wrapped up against winter’s cold.