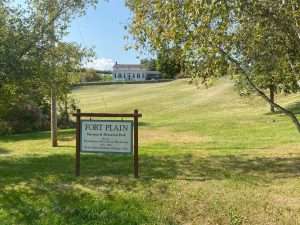 The Fort Plain Museum has announced the American Revolution Conference in the Mohawk Valley will return in 2022 with 13 speakers and a bus tour from June 9th through 12th, in Johnstown.

The Bus Tour, “Drums Along the Mohawk: General Nicholas Herkimer, the Battle of Oriskany and Siege of Fort Schuyler (Stanwix)” will be held on Thursday, June 9th. Tour Leaders Glenn F. Williams and Norman J. Bollen will guide attendees through the pages of Walter D. Edmonds’ book, Drums Along the Mohawk.

Tour stops included the Fort Stanwix National Monument, the Oriskany Battlefield, the General Herkimer Homestead, the Palatine Church, the sites of Fort Herkimer and Fort Dayton, and more. Lunch and a Bus Tour Booklet are included.

Conference – June 10th-12th The Conference is expanded to include 13 Speakers and will begin on Friday, June 10th at 1 pm, and continues all day Saturday, June 11th and ends about 12:30 pm on Sunday June 12th.

Lunch on Saturday is included in the registration fee. Lunch will consist of sandwiches, sides and beverages. There will also be coffee/beverage breaks throughout.

For more information and to register, visit the Fort Plain Museum website.