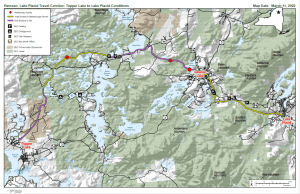 The New York State Departments of Environmental Conservation (DEC) and Transportation (DOT), in cooperation with the Office of General Services (OGS), have announced the completion of the transfer of jurisdiction for a 34-mile segment of the Remsen-Lake Placid Travel Corridor.

This portion of the future Adirondack Rail Trail between Tupper Lake, Saranac Lake and Lake Placid was transferred from DOT to DEC, marking the official start of the trail’s design and construction phase and the conversion of the rail-bed into a shared-use path for hikers, bikers, cross-country skiers, and snowmobilers.

In October of 2020 DOT began tearing up the former NY Central Adirondack Division railroad tracks to build the controversial rail trial. The rails being removed were key to a once-thriving 119-mile railroad which operated almost continuously from 1892 until 1972, first as the Mohawk & Malone, and then by the New York Central starting in 1913.

The transfer to DEC marks the formal completion of the rail removal phase and begins the start of the formal trail design and construction phase. With the transfer of jurisdiction, DEC assumes management of public safety and recreational activities, as well as maintenance, along this segment of the corridor.

“New York State continues to advance the Adirondack Rail Trail for the benefit of outdoor enthusiasts everywhere,” DEC Commissioner Basil Seggos said in an announcement sent to the press. “We thank our colleagues at the Department of Transportation for their efforts over the past year to remove existing rail tie infrastructure and set the stage for the next phase of work. DEC looks forward to working with our partners at the Office of General Services to design, build, and maintain this new and accessible recreational resource for residents and visitors alike.”

OGS is leading the trail’s design and construction with the intent to make it accessible by people of all abilities to the maximum extent practicable. Upon completion of construction, DEC is expected to assume day-to-day management of the trail.

The estimated timing to complete the Rail Trail is dependent on multiple factors including contract approvals, securing necessary wetland permits, and coordinating with State, Federal, and local entities. Construction of the compacted stone dust surfaced trail will be undertaken in stages. As each stage is finished, the completed portion of trail is expected to be opened to the public.

The first of the three stages-the Lake Placid to Saranac Lake segment of the trail- is currently scheduled to open September 2023. The complete trail is expected to be open in 2025. The projected cost for the trail is $22.9 million, which will likely be adjusted as design details and final contracted costs are finalized for parking lots; snowmobile, pedestrian, and bicycle pull-offs; retaining walls; stormwater measures; wetland mitigation; signage; and other specifics.

During the trail construction stages, public use may be limited or restricted in sections due to hazardous conditions or active construction. DEC is undertaking an assessment of the corridor and providing up-to-date information on corridor conditions, phases of construction, and a public use map on the Remsen-Lake Placid Travel Corridor status and condition webpage.