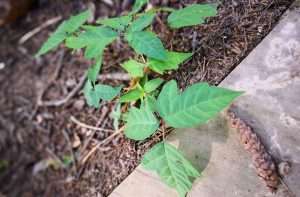 Now that the V-word has joined the list of things we mustn’t say in polite company, I hesitate to bring up the topic. No, I mean the other V-word – vaccine. Even if vaccines give you a headache, there’s a new one on the horizon which you may well like.

I realize this claim smacks of a Green Eggs and Ham-style discourse. Not to worry; I won’t stalk you with promises that you’ll like getting jabbed with a mouse, in a house, in a box, with a fox, here or there, in car, or anywhere. Now that I think on it, Green Eggs and Ham was a creepy kid’s book.

This vaccine will never be mandatory, which is the first good reason to like it. Wait – that’s the sort of pitch Sam-I-Am would make. Yikes. Let’s get right down to it: a vaccine against poison ivy will soon be available, but only if you really, really, really want it.

Related to mango, pistachio, and cashew trees, eastern poison ivy (Toxicodendron radicans) is native to most of North America east of the Rockies. It grows in a multitude of conditions as long as it has enough sunlight, though seldom above 4,000 feet in elevation.

Beyond the warning “leaves of three, let it be,” poison ivy is a sort of chameleon. Its compound, three-part glossy leaves are usually green, though often have a reddish tinge when young. Leaflet edges are notched, except when they’re smooth. The plant may grow as a ground cover, shrub, or climbing vine in various parts of its range. It seems to me it’s more often a ground cover in northern NY State, and a climber when you get south of the Adirondacks.

Giant hogweed, which rightfully gets a lot of press, can cause fearsome chemical burns that leave permanent scars, but at least its sap is water-based. If straightaway rinsed off the skin, the effect is neutralized. And when the plant (or its sap) is dry, it is completely benign and safe to handle, meaning you won’t get it in winter. In addition, the active chemical in hogweed sap requires sunlight to work, so if the affected area is immediately covered to shield it from the sun until you’re able to wash it, a burn is much less likely to develop.

With poison ivy, an overachiever if ever there was one, there are no such options. Its active principle is oil-based, so unless you can heartily scrub the skin with lots of soap and water as soon as you get exposed, you’re out of luck. Jewelweed (Impatiens capensis), a native plant with a succulent, sap-rich stem, often grows alongside poison ivy. Breaking a jewelweed stem and rubbing its sap on affected skin right after exposure is said to prevent a rash. There is little hard evidence for this, but it seems to have worked for me, and certainly caused no harm, so I’ll continue using it when soap and water are not available.

Worse yet, Toxicodendron is itching to gift us with a rash in any season – you can get a reaction from touching stems, roots or dead leaves. Even items which have touched the plant, like clothes or your pet’s fur, can cause a rash through secondary contact. Its noxious weapon has a long shelf life, too – the work gloves you wore to rip out poison ivy last summer will remain potent for at least five years.

The plant’s oily toxin is urushiol, a word derived from the Japanese urushi, meaning “OMG what a miserable rash.” Or it’s the name of their lacquer-tree, a cousin to poison ivy – I forget. Unlike the swelling and itchiness caused by nettles, poison ivy’s effect does not involve our body’s histamine response. Urushiol’s action is based on a couple of distinct and parallel chemical pathways. This seems unnecessarily complex, of course, but it’s typical of an overachiever.

As I understand it, urushiol enters the skin and irritates a bunch of Langerhans cells, whose normal job it is to eat strangers on sight. Without so much as texting ahead, the Langerhans Gang rushes to the nearest lymph node. There they coerce it into coughing up some helper T-cells, which they escort back to the site of poison ivy exposure. That’s where helper T-cells induce redness and blistering, which to me sounds anything but helpful.

The itchiness is a separate issue. A mast-cell response apparently drives the itch, but the process needs further study. In fact, scientists have only scratched the surface.

But none of this is relevant to the new vaccine.

While details of poison ivy’s misery-making machine have been mapped, we don’t yet know how to interrupt these pathways with a drug or inoculation. The forthcoming poison ivy vaccine is more like an allergen-desensitizing shot you might get in your doctor’s office. According to a September 2021 Scientific American article written by Claudia Wallis, researchers at the University of Mississippi have synthesized an active compound from urushiol and used it in a vaccine that will be good for one to two years.

At the risk of going back on my word that Sam-I-Am and I are not the same person, you may like this vaccine more in the future because poison ivy gets bigger and badder each year. Rising carbon dioxide levels help most plants boost their rates of photosynthesis to grow faster and get larger. Poison ivy is especially good at taking advantage of this.

In addition, urushiol oil becomes more potent as CO 2 spikes. Researchers at the US Department of Agriculture claim that poison ivy’s growth rate and toxicity have doubled in the last 50 years, and are likely to double again by mid-century when CO 2 reaches a projected concentration of 560 ppm.

What’s not to like about this upcoming – and very optional – tool which can save us from a mega-poison- mega-ivy rash? Other than the fact the cure is the loathsome “V-word,” I suppose.