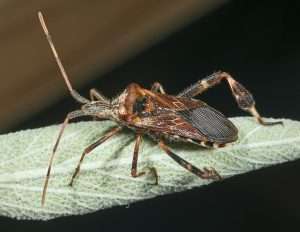 I was settling in to answer a few emails when I heard, “Dad, some huge bug just flew into the lamp shade!” As the designated bug catch-and-releaser, I pressed into action.

A western conifer seed bug (Leptoglossus occidentalis) had made its way into our house, and movement of boxes from the basement likely brought it to our living space. Even beyond human houses, this bug is considered invasive in the Northeast.

Western conifer seed bugs belong to the leaf-footed bug family (Coreidae) named for the flattened rear tibias, or lower leg segments, common in many species. They are 3/4-inch brown bugs with abdomens that taper to a blunt point at the rear. The thorax narrows at the front end where the head attaches. Their antennae are prominent and about as long as the front legs. They are often confused with the marmorated brown stink bug, although western conifer seed bugs are slimmer and can be distinguished from most other bugs by a pale, zigzagging line across their width.

Sometimes entomologists choose good common names, and this one deserves a prize. Western conifer seed bugs are native to western North America, consume the seeds of several conifer species, and are true bugs (Hemiptera). The species was detected in 1992 in Pennsylvania and is now widespread throughout the eastern U.S. and seems to also be munching its way through South America, Europe, and Southeast Asia.

When an insect species that can consume many, many seeds shows up in a new place, ecologists and foresters may have reason for concern. Trees produce huge numbers of seeds, but not all seeds fall on ground suitable to growing. Of those that do, not all germinate. The seeds that do manage to take hold must compete for light with seedlings of other species. The next generation of trees depends on very large numbers of seed production. 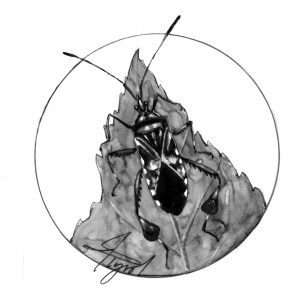 Western conifer seed bugs could shift the nature of mixed woodlands by diminishing the chance of conifer seeds to survive and propagate. Seed bug feeding can cause developing cones to prematurely fall from their trees. In surviving cones, viable seed production falls. As with many invasive species, western conifer seed bugs came here with our help and without the full complement of predators, parasites, and infectious diseases that would keep the bugs in check in their native habitat.

A western conifer seed bug feeds by climbing onto a cone and inserting its long and pointed mouthpart, called a “rostrum,” under the cone scale to access the seed. If a bug feels threatened while feeding, it releases a chemical cocktail from dorsal abdominal glands. This is similar to a deer flashing its white tail, which inspires other deer to run. When that first bug and all of its peers are running or flying or dropping from a pine cone, there’s a good chance that the threat – perhaps a chickadee or other predator – will bag a different bug than the one that pulled the fire alarm.

In their natural habitats, conifer seed bugs gather under tree bark on decaying logs, in hollow trees, or in animal burrows to persist through the winter. But from the bug’s point of view, your attic will do. And frequently, when one comes inside, more will follow. Males release an aggregating pheromone that attracts other seed bugs. A mass of more than 2,000 western conifer seed bugs was found at a manufacturing plant in British Columbia. The factory was 650 yards from the nearest conifers, which indicates how far these bugs will travel for suitable winter digs. Since many factories ship crates of materials cross country and beyond, it’s not hard to imagine how these bugs have traveled the world.

On the positive side, if these bugs enter your house, they neither sting nor bite. A western conifer seed bug can easily be scooped up and liberated without risk to human life or limb. And hopefully you won’t have to also deal with 2,000 of its buddies!