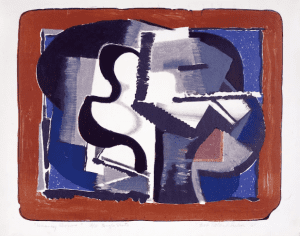 The life and works of influential Black artist and master printer Robert Blackburn (1920-2003), whose innovation and expertise with the medium helped define the overall aesthetic of the American graphics “boom,” will be highlighted in this new Smithsonian exhibition at The Hyde Collection in Glens Falls, NY.

Blackburn was a key artist in developing printmaking in the United States. He became known as an influential teacher and master printer, engaging with avant-garde artistic ideas while promoting a new collaborative approach to a traditional medium. The exhibition traces Blackburn’s artistic evolution alongside the original prints of other iconic 20th-century American artists with whom he collaborated.

Blackburn was born to Jamaican immigrants on December 10th, 1920, and raised in Harlem, New York, during the Harlem Renaissance, an unparalleled flourishing of the arts, centered in New York City’s creative black community. The arts were considered crucial to society’s well-being and a fertile medium for activism, and these values resonated with Blackburn throughout his life and work. In 1947, he founded a printmaking workshop as a welcoming space where artists of any level could learn and create together, and it remains in operation to this day. Blackburn’s art gradually shifted from figurative work to highly colored abstraction, creating a fascinating and engaging body of work.

“Robert Blackburn & Modern American Printmaking” celebrates both the artist and the democratic, diverse, and creative community that he created. It features approximately 60 works, including lithographs, woodcut, intaglio, and watercolors by Blackburn and the artists he collaborated with, including Grace Hartigan, Robert Rauschenberg, Elizabeth Catlett, and Romare Bearden, among others. The exhibition is supported by a grant from the Henry Luce Foundation and funding from the Smithsonian’s Provost Office.