Anne McVickar Grant says in her Memoirs of an American Lady: With Sketches of Manners and Scenery in America, as they Existed Previous to the Revolution (1808), a memoir of an aunt of General Philip Schuyler, that theater began in Albany in 1760. She says that British soldiers quartered at Albany, built a stage and produced The Beau’ Stratagem. The 1707 play by Irishman George Farquhar details the exploits of two young men on hard times who plan to travel and seduce wealthy women for the their money. Unexpectedly, one falls in love.

Grant says the soldiers felt that the moral of the story was missed on the Albany residents, “so indifferent was the English Language understood by them.”  Almost 100 years after the English occupation of Albany, the Dutch language was still predominant. In fact, pockets of Dutch speakers remained into the 20th century.

It was said that few if any of the Albanians had ever seen a play and probably didn’t even know the meaning of the word stratagem. Reportedly, the younger people in the crowd enjoyed the performance and were “not much harmed thereby.”

But the older “more soberer folk” were aghast. Young men had played female parts and worn female costumes including great hoops and flirted around the stage and “above all things they had actually painted their faces!” Such a violation of decorum had never been known in Albany. The young British army officers’ actions were scandalous.

An old Albany fable says that at this time Rev. Theodorus Freylinghausen served as pastor of the Dutch Church and monitor of Albany morals. He exhorted in the street and lambasted in the pulpit over the play, but the officers laughed openly at his authority. They planned a second production, The Recruiting Officer, a 1706 play by Farquhar, which details the sexual exploits of two English Army officers.

The next Sunday Freylinghausen was much more aggrieved than before and the church vibrated with his denunciations.

On Sunday night, just after dark, many strange and unexplained occurrences seemed to haunt Freylinghausen’s house. While he was eating dinner, he heard a whispering sound calling his name at the window and looked up to see painted faces staring back at him. He jumped-up and ran to the window but there was no one to be seen. 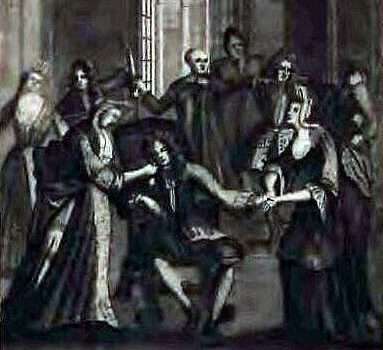 As he uneasily blew out his candle and slid into his bed, the ghostly sound of what he believed to be a person draped in chains began scrapping across his roof, first rising up one side, dragging across the top and then sliding down the other side. When he looked out the window, all he could see were strange lights flickering on and off in his garden and in the woods. He thought he saw a body, hanging by the neck, suspended from the limb of his apple tree, but then it was gone. He covered his head with the blankets and sat stone silently on the bed.

As hours passed, nothing happened, and he began to nod off when suddenly a huge explosion shook the whole house and a loud scream seemed to be coming down his chimney. Dirt, soot and stone fell into the fireplace and he knew something was climbing down the chimney and screaming as it came. He was sorry he had let the fire go out. He picked up a poker and, visibly shaking, hid in a corner behind his chair under a blanket.

He suddenly realized the sun was coming up. He put on his clothes and shoes and finding enough courage to open the door, found that someone had placed a walking stick, an old pair of shoes, a crust of black bread and one coin on his porch. This was an old Dutch warning to depart.

The symbolism was not missed by Freylinghausen, who, hearing that a Dutch ship was docked in New York, packed up and left for Holland. It was expected that the irate dominie would return when he had time to cool down but he got on the ship and was never heard from again.

It was said that the vengeful ghost of Rev. Freylinghausen left the ship and returned to Albany and in retribution haunts the Albany theater to this day.

(Note: This is most likely one of many derogatory stories made up about the Dutch by the British occupation force after 1664 when English writers started to record their version of Albany’s history, together with the appearance of terms like “Dutch Treat” and “Dutch Uncle.” The real Freylinghausen actually died in New Jersey.)

Illustrations: Above, Philippe Mercier (1689-1760) after – Robert Wilks (1665–1732), as Captain Plume in ‘The Recruiting Officer’ by George Farquhar; and below, detail from the frontispiece of the first edition of The Beaux’ Stratagem.