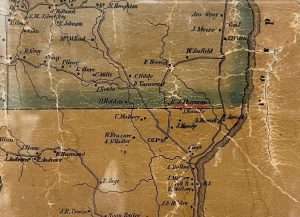 This collection includes documents related to people of African descent who were either residents of the county or famous visitors such as Frederick Douglass, and stories of Abolitionists who offered assistance to enslaved people seeking freedom.

One of the documents in the collection is entitled My Year in Washington (1848-1849) written by Lydia Frances Sherman. Sherman, born in Hadley, NY in 1826, focuses her memoir on the year she taught school in Washington D.C., on the site that would one day be home to the Library of Congress. However, the first few pages of the document recall her childhood growing up in Hadley where her father, Edmund J. Sherman, offered shelter to freedom seekers at their home in the southeast corner of the town, just north of the Corinth town line.

Though slavery in New York State officially ended in 1827, many southern tourists who patronized the nearby resort community of Saratoga Springs continued to bring enslaved people with them during the summer season. Lydia Sherman states that it was these African Americans whom her family was assisting through the Underground Railroad network in upstate New York and on into Canada. Coming through Greenfield, where Quaker Abolitionist Mason Anthony resided, the freedom seekers would then be brought to the Sherman home in Hadley before proceeding across the Hudson River into Warren County. Traveling after dark, Lydia’s father Edmund Sherman would transport them to the home of Henry Beach, a relative in Luzerne.

Lydia remembers her father as a lifelong abolitionist. She notes, “he voted the Whig ticket when William Henry Harrison was elected, but after that stood by the anti-slavery party as long as he lived.” He was noted as having been a participant at the 1846 Saratoga County Liberty Party Convention and the 1850 Federal Census for Hadley shows him as a farmer in a household consisting of eight people. His daughter mentions that he sometimes taught school in the winter to supplement the family income.

Lydia tells us that freedom seekers would normally stay one night with her family before moving on. However, she recalls a particular episode where a man had to stay with them for several days because of a reward offered for his capture, which was posted prominently in several places in the area. A well-timed visit from one of Lydia’s older sisters, who had come home with a young baby, gave the family a daring idea. They decided they would dress the enslaved man in women’s clothing with a veil covering his face and wrap a large doll in blankets for him to hold in his lap, essentially disguising him as Lydia’s sister.

Lydia’s mother, Susan Wilcox Sherman rode along with him in the wagon for the journey, which consisted of crossing two bridges (over the Sacandaga and Hudson Rivers) and traveling through the village of Luzerne. It was quite stressful, as they were worried that an acquaintance would see them and want to stop the wagon to visit. Thankfully, they were able to arrive at Lydia’s grandfather’s house without any difficulties and the man was able to continue on his journey to Canada, eventually sending word back to the family that he had arrived safely.

Lydia went on to teach school at the age of fourteen, noting that it was the only profession available to “girls who wanted to make a living.” She first taught locally and then in Washington D.C., after following her sister Jane to the area. While there, she made several observations regarding the lives of African Americans residing in the south. She mentions passing the slave pens on Maryland Avenue in the nation’s capital and walking along the shore where she saw enslaved men at work on a plantation bringing in large quantities of fish.

Her attention was called to the song they were singing as they labored. “One man would sing a line or tune, apparently improvising as he went along, and the whole party would join the refrain, ‘John, come down the holler.’ After a few minutes the refrain was changed to ‘Never come back any more,’ in a most doleful minor key.”

Lydia Sherman left Washington, DC after being there for only a year, noting that the Washington Monument was under construction when she left and “in October 1849, the structure, near as I can remember, was about ten feet high.” She married William Henry Kilby and moved to Eastport, Maine, and then to Boston, where she spent much of her later life. She passed away in North Attleboro, Massachusetts in 1916.

Memoirs such as these give valuable insight into the ways that abolitionist networks were organized. Since much of the information was passed by word of mouth, documents providing concrete evidence of where specific stops along the Underground Railroad were located and who was managing them are not always available.

There was danger in providing aid to freedom seekers, especially after the Fugitive Slave Act of 1850 was passed, which is why it was safer not to have a paper trail. However, brave abolitionists such as the Sherman family made an impact in the fight against slavery and were able to assist freedom seekers on their way to Canada, despite the inherent risk in doing so.

Lauren Roberts is the Saratoga County Historian. She is co-host of the WAMC podcast A New York Minute in History, along with NYS Historian Devin Lander. Roberts co-produced the recently released documentary Harnessing Nature: Building the Great Sacandaga, which chronicles the creation of the Sacandaga Reservoir.