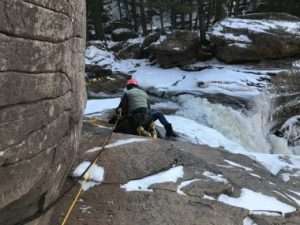 According to a press release issued by the New York State Department of Environmental Conervation (DEC), on February 20th at 12:10 pm, Forest Ranger Fox responded to a report of a subject on the ice approximately seven feet from the edge of Kaaterskill Falls. Environmental Conservation Police Officer (ECO) Lt. Glorioso and ECO Palmateer also responded.

Kaaterskill Falls is a two-stage waterfall on Spruce Creek in the eastern Catskills, between the hamlets of Haines Falls and Palenville in Greene County, NY.

ECO Palmateer located the subject, anchored his throw bag to a tree, and threw a rope to the subject to prevent him from sliding over the edge. Ranger Fox set up a static line, tied an improvised seat harness to the 56-year-old from New York City, and secured him to the line. Ranger Fox then helped the subject work his way back to safety.

After providing traction devices, Ranger Fox, Lt. Glorioso, ECO Palmateer, and the Greene County Sheriff’s Department helped the subject back to his vehicle at the trailhead. Resources were clear at 2 pm.

Photo of rescue underway at Kaaterskill Falls provided by DEC.