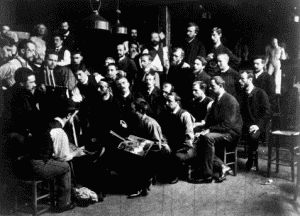 In spring 1905, painter Hubert Vos received a letter at his Manhattan residence from the Dutch Legation in Peking inquiring if he would be able and willing to travel to China and paint the portrait of a prominent official. The invitation was vague, but too tempting to refuse for a painter who had made the portraiture of racial types his specialty.

Arriving in the Forbidden City after a two months journey, Vos learned that he was summoned to paint the portrait of the legendary Empress Dowager Cixi, a woman who had begun her adulthood as an Imperial concubine in 1852 and rose to hold supreme power in the Manchu Empire for the best part of forty years. She was the most powerful woman of her era with the possible exception of Queen Victoria of the United Kingdom and Ireland.

For the Empress it was a planned step in the process of modernization of both her nation and its rulers; for the artist it was the most important commission in his illustrious career.

Hubert Vos was born on February 15th, 1855, in Maastricht on the southern tip of the Netherlands. After the early death of his father, he established himself as a bookseller with branches in Brussels and Maastricht. Having sold his business, he studied painting at the Académie des Beaux Arts in the Belgian capital before moving to Paris to continue his art education.

He registered at Fernand Cormon’s atelier libre (art school) on the ground floor at 104 Boulevard de Clichy, Montmartre. Vincent van Gogh had joined the school just after his arrival in Paris from Antwerp in March 1886. There he met an emerging generation of artists that included Henri de Toulouse-Lautrec and Émile Bernard. There is an intriguing photograph of Cormon’s art class taken at some time in 1886 which includes Toulouse-Lautrec seated on the left (wearing a hat). Van Gogh is not present amongst the students, but there is a distinct possibility that Hubert Vos is one of the members of this group.

It is feasible that Hubert and Van Gogh met at the Atelier Cormon (although Vos is not mentioned in Vincent’s correspondence). At that stage in their careers, both painters tended towards social realism, depicting the poor and destitute in their work. At the Paris Salon of 1886 Hubert Vos won a gold medal with Le réfectoire des femmes à l’hospice des veillards à Bruxelles (Women’s Room in a Brussels Almshouse).

His growing reputation emboldened Hubert to move to London with his first wife Aline Watteau, a relative of the French Rococo painter. Once settled, he established a number of teaching classes, including Glebe Place Studios for Ladies in Chelsea. In 1891, he co-founded the Society of British of Portrait Painters together with his American-born friend James McNeill Whistler and others.

During his stay in London, Vos painted the portrait of Egor Egorovich Staal, the Russian ambassador in Britain. At the personal request of the Dutch ambassador Charles van Bylandt, he created the first known portrait of young Queen Wilhelmina of the Netherlands (using photographs). In a relatively short period of time his career had led him away from his early interest in the fate of the downtrodden. He was moving in elevated social circles and there was more to come. 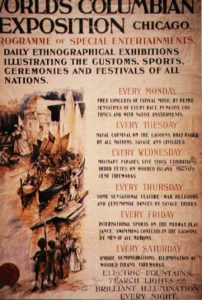 Chicago’s 1893 World Fair celebrated the 400th anniversary of Columbus’s purported discovery of America. The occasion was meant to showcase the nation’s role as a burgeoning economic and political superpower.

The exhibits illustrated the progress of civilization over successive centuries. Human history was envisioned as a forward process that moved from savagery, through stages of barbarism, to reach civilization – Darwinism made visible.

The Midway Plaisance Park portion of the Exposition was a lesson in human development. The living exhibits of ethnic villages provided visitors with glimpses of ‘primitive’ cultures which stood in sharp contrast to the stage of civilization as presented in the White City area. The Fair reflected a perceived racial hierarchy that placed WASPs on top and dark primitive peoples at bottom. 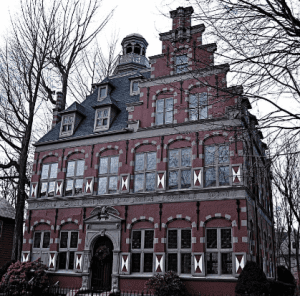 For Hubert Vos, Chicago meant a turning point in his career. In the run up to the event, he had been appointed Deputy Royal Commissioner for the Netherlands in support of fellow Dutch painter Willem Mesdag to prepare the art section of the nation’s pavilion. Named the Dutch House and built by the Van Houten Cocoa Company to advertise their wares in a rapidly expanding market, its design was based on the 1591 Town Hall of Franeker in Friesland.

When the Fair was over, the house was acquired at auction by Brookline resident Charles B. Appleton who had the structure dismantled and shipped to be rebuilt in his Massachusetts home town, now residing at 20 Netherlands Road.

For his part in preparing the exhibition’s Dutch section, Hubert’s organizational skills were praised (he also served as a Fine Arts commissioner at the 1904 World’s Fair in St Louis). The Chicago experience enamored him of America. He sold his London studios and settled in the city of New York. 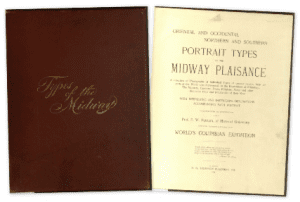 Artistically, Hubert Vos was enthused by the Chicago exhibition. Having encountered various racial types in close proximity, he decided to concentrate his energy on portraying different ethnic groups and individuals. He became a pioneering painter of non-Caucasian portraits, traveling the globe in search of suitable subjects.

Midway Plaisance inspired him to create a “Gallery of Exotic Types” of some forty portraits that would eventually be exhibited at the Union League Club in New York and the Corcoran Gallery of Art in Washington. Most of these compositions were bust or half-length portraits with close attention to detail in the peculiarities of facial expression, clothing, and accessories.

Social-Darwinism had pervaded American thinking during the Gilded Age. Sociologists and economists corrupted Darwin’s biological language of evolution to justify their own political agendas. They argued that government should not interfere in the ‘natural’ struggle for endurance. From Darwin they also derived the notion that Western imperialism was a necessity. It was the white man’s duty and burden to civilize ‘inferior’ peoples and races.

Evolution and natural selection provided fertile territories for the creative imagination. Hubert Vos had observed the impact of Darwin’s theories on art in a variety of expressions. Responses ranged from projections of prehistorical scenes to visions of life-forms in perpetual evolution. His former teacher Fernand Cormon was a leading figure amongst those who used their brush to recall a distant past. For the Museum of Natural History in Paris he created ten murals that depicted a narrative of mankind’s ascent to ever higher stages of being.

In The Origin of Species Darwin had stressed the inexhaustible beauty of nature. It was this aspect to which Vos responded. His oeuvre is not a pictorial confirmation of evolutionary theories, but rather a celebration of race variations that make up the multi-colored splendor of humanity. His interest in ethnicity may have originated in prevalent social-Darwinist ideas, but he treated his subjects with a great deal of respect and dignity.

The Artist as Nomad 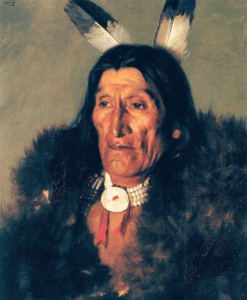 By starting in his adopted country, Hubert Vos set out to record different aboriginal races before they would become extinct. In the 1890s he stayed for a while at the Fort Totten Reservation, North Dakota, to sketch and paint portraits of Sioux and Chippewa people. It was the beginning of a long journey that would lead him to places that were considered almost inaccessible at the time.

In November 1897 he met Hawaiian Queen Liliuokalani who was on a visit to New York. He fell in love with her lady-in-waiting. His marriage to Eleanor Kaikilani Graham, a widow of Hawaiian and American descent, caused a scandal as he was not yet divorced from Aline Watteau. He visited Hawaii in 1898 where he painted local fishermen and the portrait of a flower girl. He was one of a number of artists who made an effort to capture the life and culture of Old Hawaii before it vanished. 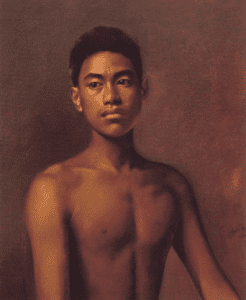 From there Vos traveled to Korea where he completed at least three paintings. In each case, he kept a duplicate for his “exotic people” show. The Korean copies hung in the Deoksugung Grand Palace in Seoul until 1904 when they were destroyed by fire. These included a life-sized portrait of Gojong, the first Emperor of the country. During a visit to Java, Vos was welcomed at the Sultan’s Court in Yogyakarta.

At the 1900 Exposition Universelle in Paris he was able to display thirty-two “Types of Various Races” at the American Pavilion (although a number of critics objected to his presence as a representative of American art). The World Exhibition was important for a different aspect of racial history. The organizers had devoted a separate building to matters of “social economy.” The American section featured an exhibit highlighting the history and “present conditions” of African-Americans. Overseen by W.E.B. Du Bois, the exhibit materials included 500 photographs as well as a display of 200 books written by black Americans. 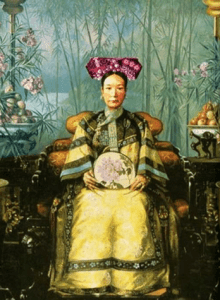 During his first visit to China in 1898 Vos had painted at the Emperor’s residence and created a portrait of Prince Ching, the Supreme Leader’s uncle and political advisor. When Empress Dowager Cixi saw his work in 1905, she requested that the Dutch Legation invite the painter to the Imperial Court. He was the first European male artist to paint a (flattering) portrait of the Empress that is still on display in the Hall of Dispelling Clouds of the Summer Palace in Beijing. It was a first step in China’s opening up to the Western world.

On his return to New York in 1906, he completed another portrait which he had started in China. Depicting the Empress with a much sterner expression and facial features more consistent with her age and ailing (she died in 1908), the portrait went on public display in his brand-new Central Park Studio at 15 West 67th Street. For the first time New Yorkers were able to view an image of the world’s most intriguing and secretive woman. 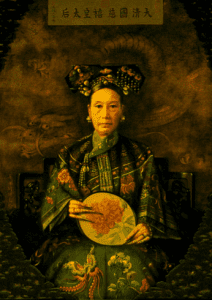 There was certainly a theatrical aspect in the artist’s passion for the exotic and outlandish. It is therefore no surprise that he was elected to New York’s Lambs Club in 1895.

In 1868, friends of Charles Lamb had formed a men’s theatrical and dining club in London. They named the social gathering in his honor. One of its co-founders was actor Henry James Montague. During his stay in America, just before Christmas 1874, Montague founded The Lambs of New York which held its first meeting at the original Delmonico’s Blue Room on 14th Street. The club was incorporated in 1877. Being America’s oldest theatrical organization, The Lambs continues to the day. Its roster of members, past and living, reads like a Who’s Who of American acting.

As a valued member of The Lambs, Vos painted several portraits (including a posthumous portrait of Montague, the club’s first “shepherd”) that today hang in the clubhouse at 51st Street. Having made this visible contribution to the history of American Theater, the painter died in January 1935 in New York.

Posterity has not been kind to Hubert Vos. Today, he is an almost forgotten figure. From our perspective, the paintings he made in Hawaii, Indonesia, Korea, and China are the most intriguing. He may have been a sensitive observer who respected his sitters, but contemporary viewers are still hit with a sense of unease when confronted with this type of racial portraiture. It makes the overdue reassessment of his prolific output both relevant and challenging.