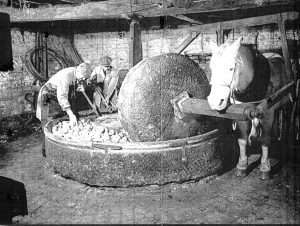 You may have noticed that “Since 1842” appears on the label of all Mott’s apple products. That was the year Samuel Mott began selling apple cider and vinegar to his neighbors in Halfmoon, Saratoga County, NY. The Mott’s apple processing empire we know today grew from that humble beginning.

This fascinating story actually begins when Zebulon Mott moved his family after the American Revolution to a farm at what is now Market Road, and was then part of the Kayaderoasseras Patent. He and his wife Rebecca purchased the property in 1795. He had served in the Revolution and became a prominent man in Halfmoon’s early history. Zebulon was the Town Supervisor from 1801 to 1817, served in the New York State Legislature, was Deacon of the First Baptist Church that stood at the corner of Farm to Market and Pruyn Hill Roads and is buried in the Newtown Cemetery.

Zebulon’s brother Samuel, compiled and edited Mott’s Almanac. Zebulon’s son John Mott lived on the adjacent farm to the west of his parents Zebulon and Rebecca on the Kayaderoasseras Patent.

Samuel Roger Mott, John’s Son, was the last Mott to live on the farm in Halfmoon. Samuel spent many a day walking through the orchards with his grandfather Zebulon. There, he learned the tricks of the trade in processing the apples for cider and vinegar. Word got out and he started selling his product to his neighbors. The logo on every jar reads: SINCE 1842 and that was the year that Samuel, at 16 years old, began selling his product to his neighbors.

The cider was made by hitched horses that plodded in a circle, crushing apples between two large stones drums. This was a centuries old production process. As the demand grew so did the mill. The horses were replaced with a more modern method using waterpower and steam to operate the presses.

In 1868, at the age of 46, Samuel, his wife Ann Mary Coon, and 4 of their 5 children left Halfmoon and moved to Bouckville, in the Town of Madison, Madison County, NY, buying a 1/3 interest in a cider vinegar factory. On July 19th, 1870, Mott bought out his two partners Beach and Brown for $4,500. Samuel, like his grandfather Zebulon, served as town supervisor (for 17 years) and also as a member of the State Assembly.

Fourth generation John Coon Mott, Samuel and Ann Mary’s oldest son, and the last Mott to be born in Halfmoon, did not move with the family to Bouckville. He lived in the city of New York where he opened a cider mill of his own that was located where the Jacob Javits’s Convention Center is now, near Pier 76. Father and son merged their companies in 1879 forming the S.R. & J.C. Mott Company. In 1882 the mill in Bouckville was processing 14 carloads of apples converting them into 600 barrels of juice per day. A barrel contained 25 gallons, to give you an idea of their production. By that time there had expanded to distribution across the county and served international customers as well.

In 1900, the S.R. & J.C. Mott Company merged with the W.B. Duffy Cider Company of Rochester, NY, creating Duffy-Mott and was incorporated in New York in 1914. The newly formed company introduced many products that we are familiar with today and sold the company to Cadbury Schwepps in 1982.

Charles Stewart Mott, John’s son, studied the fermentation process in France and Germany. He began work in the family business, but at the turn of the century, he became the Superintendent of his uncle Frederick’s business, the Weston-Mott Wheel Works. They produced metal wheels for bicycles, carriages and rickshaw’s and later axles. They were offered a proposal to build a plant in Flint, Michigan and produce wheels for “Horseless Carriages.” Uncle Frederick, not wanting to move, turned the business over to his nephew Charles.

The success of the Wheel Works caught the eye of a new up and coming company. In 1913, Charles sold the business in exchange for stock in that new business – General Motors. For many decades he would remain the single largest individual shareholder in the firm, and accumulate wealth in excess of $800 million. He sat on the Board of Directors for 60 years until his death in 1973. It was Autos, not Apples that made him one of America’s first billionaires.

In 1926 he created the Charles Stewart Mott Foundation with a $320,000 endowment, explaining his reason in an often-quoted comment: “What I Am worth is what I do for other people.” The foundation celebrated its 95th anniversary this year. It now has more than $3 billion in assets and offices in three countries. His subsequent gifts of cash and stock made his foundation one of the largest in the country, and he donated more than $130 million dollars to organizations in his lifetime.

Lynda Bryan, a life-long resident of the Town of Halfmoon, has also served as Town Clerk since 2010, and is Town Historian and President of the Halfmoon Historical Society.