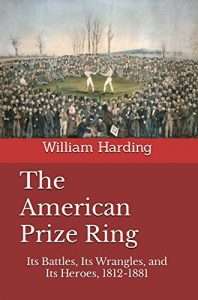 Harding’s columns are here assembled for the first time by Jerry Kuntz, who provides an informative introduction.  In a foreward New York Almanack founder and editor John Warren writes that “the importance of Jerry Kuntz’s yeoman work in assembling sporting writer William E. Harding’s columns on pugilism in America cannot be understated. Quite simply, this is the best reference work on bare-knuckle boxing in America…”

All the major and most of the minor bouts are recounted until 1881, including the bouts of ring legends Tom Hyer, Yankee Sullivan, John Morrissey, Joe Coburn, Ed Price, John C. Heenan, Tom Allen, Jem Mace, and others.

“The details, and sometimes alternate interpretations of events, included in this volume can now be easily disseminated, analyzed and interpreted to illuminate the social milieu; the traditions, techniques, and cultural responses; and the personal and professional motivations that helped give rise to modern boxing,” Warren writes.

The book, which includes 340 pages, is available in hardcover, softcover and Kindle editions.