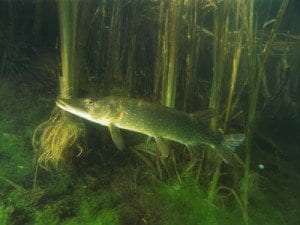 Beneath the ice that covers our many lakes during winter, there exists an arena in which fish prowl their surroundings for something to eat and attempt to avoid being eaten by a larger predator.

One species, when fully grown, that never has to worry about being attacked and gulped down by another creature of the deep is the northern pike. This sizeable, torpedo-shaped beast reigns at the top of the food chain in most lakes and larger ponds.

A mature pike, like a snapping turtle, is quickly recognized by its large size. Under favorable conditions, a northern can average 26 to 30 inches in length and weigh 8 to 9 pounds; however, experienced anglers may periodically hook one that approaches 3 feet and weighs close to 20 pounds. (The record pike for New York State is 46 pounds. This fish was taken from the Great Sacandaga Lake in 1940.)

Like other members of its family, a pike has a single dorsal fin set far back on its body, nearly opposite its anal fin. It is also characterized by a wide and rounded mouth that contains very sharp teeth. While a pike’s teeth do not have the same razor edge as those of a piranha or barracuda, this common lake dweller can still inflict a serious wound if improperly handled when taken from the water. The pike’s sharp teeth are the reason that knowledgeable sportsmen use a steel leader to connect their hook with their line. Regular fishing line, regardless of the thickness or test, often gets cut as it moves across the mouth of a pike when this giant thrashes in the water after being hooked.

The feature used by anglers to distinguish a young pike from its smaller relatives, the pickerel, is the absence of scales on the lower half of the pike’s gill cover. Both species of pickerel have a gill cover that contains scales over its entire surface. A pike may also be recognized by its dark green color and the much lighter splotches or lines on its sides. The musky, which is the largest member of this family of fish and a resident of more massive bodies of water such as Lake Champlain, the St. Lawrence River and Lake Ontario, has a light colored back and sides with a pattern of darker markings over it. 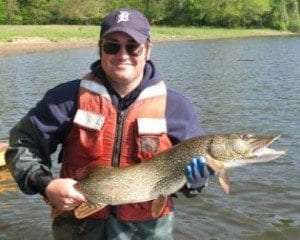 The pike’s large size makes it relatively easy for other fish to see coming from a distance, especially when it travels through open areas. In order to avoid alerting prey of its presence, the pike regularly hides in various places from which it ambushes smaller creatures that pass within striking range.

In summer, the pike is known to lurk in submerged beds of aquatic vegetation that form in shallow areas where it waits for a frog, duckling, perch, sunfish or some other aquatic creature to swim by. The camouflage pattern of color on its back and sides allow it to effectively blend into such weedy settings.

In winter, as many cold-blooded creatures embed themselves in the bottom muck and lapse into a dormant state, and others migrate to lower depths, the pike is forced to relocate to deeper waters where most fish that remain active during the winter congregate. In these settings, the pike seeks out rocky ledges and sites where a cluster of debris can provide nooks and crannies into which this predator can wait for prey to swim by. Experienced anglers are well aware of these spots beneath the ice where bottom irregularities offer this ambush predator ideal attack opportunities.

Even though the cold reduces the metabolism of this fish and causes it to become less active than in summer, the pike still regularly hunts for prey throughout winter. As February draws to a close and March arrives, the pike is more likely to hunt, as the spawning season for this giant draws closer. It is shortly after the ice goes out, while the water is still frigid, that spawning occurs in the shallows. Egg development has already started within the body of the female and as the winter gradually comes to an end, her need for nourishment increases.

There is less than a month left in this year’s ice fishing season, and the slow start of this outdoor activity because of poor ice conditions early on has allowed many large pike to survive the winter without having any encounters with a winter angler. Fishing for pike during the final weeks of the season, when the sun is higher in the sky, and the wind is calm, can be a most memorable experience. As a general rule, however, this time of the year tends to be quite windy, so dress warm, as the breeze blowing over a frozen lake can be most chilling.