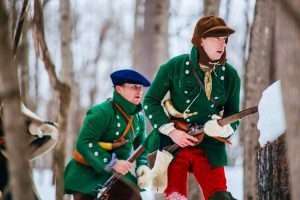 Robert Rogers departed Fort Edward on a grand scout of French-held Ticonderoga on May 3rd, 1759, leading 358 Mohawk warriors, British regulars and Rangers. They arrived across from the French fort at Cape Diamond, present day Mount Independence, early on March 7th and there they sat in ambush, awaiting French soldiers who hiked across frozen Lake Champlain to cut firewood.

When Rogers’ British raiding party sprung their ambush, the French, armed only with their axes, fled back across the lake. As they pressed the enemy they came within “pistol shot” of the fort walls and the French guard sortied out to attack them. Rogers’ party retreated across the ice towards Mount Defiance, between Champlain and Lake George. Safely in woods once more, they returned to Fort Edward with the latest news about the French fort, in preparation for the campaign season to come. The skirmish is now known as the Battle on Snowshoes.

Fort Ticonderoga will host a reenactment of the battle on Saturday, February 26th. Throughout the day, visitors can explore life for the French garrison inside Fort Ticonderoga, discovering the sights and sounds of daily life for the soldiers guarding French Canada’s front line. French drummers will offer a 12:30 pm concert highlighting the songs that regulated military life and French folk songs. Visitors can tour the French soldiers’ quarters, see the simple luxuries of the Officers’ quarters and learn more about the dire situation for French Canada in 1759.

Hands-on programming will explore the components of French artillery ammunition as Fort Ticonderoga staff recreate the shot stockpiled for the coming summer siege. Attendees will be able to strap on snowshoes and march out to the edge of frozen Lake Champlain to see the real battlefield for the presentation of the battle beginning at 1:30 pm. Winter footwear is strongly encouraged.

This event will take place from 10 am to 4 pm. Fort Ticonderoga is located at 102 Fort Ti Rd, in Ticonderoga, Essex County, NY. For more information visit their website.