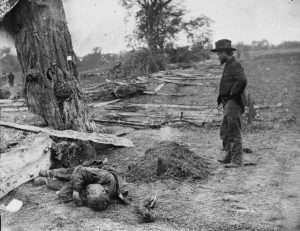 Morgan Filkins was born August 20, 1826, son of Richard Filkins and his second wife, Catherine Angle. Of English and Dutch descent, he was the twentieth of twenty-five children born in the town of Berne, Albany County.

His paternal ancestors were originally from Dutchess County. His father was a volunteer in the War of 1812 and after living awhile in Rensselaer, he moved across the Hudson River to Albany County, where he died in 1841. His maternal grandfather came to America as a soldier under Burgoyne, and after the latter’s surrender, remained in the service until honorably discharged in 1783 at West Point.

Filkins received an academic education, studying medicine at Honesdale, Pennsylvania. In 1850 he was single and a doctor in Berne. He then became engaged in the patent medicine business, being the inventor of Dr. Filkin’s Sugar Coated Pills and the proprietor and manufacturer of Blackman’s Genuine Healing Balsam and Valuable Strengthening Plasters. Filkins was married in 1853 to Henrietta A. Blackman.

Originally a Whig in politics, Filkins was an anti-immigrant nativist. In the 1850s he was a leader of the nativist political organization in Albany County (known locally as the American Party) and was described as “among the most active, intelligent, and successful supporters of its principles.”  Filkins was a member of the New York State Assembly from Albany County’s 2nd District (in 1859 and 1864) and later served as Postmaster in Albany from 1871 to 1877.

During the Civil War, Morgan Filkins enlisted at the age of 36 and was commissioned a captain.  An Albany Evening Journal article tells of his experience disinterring Albany war dead to return them to their families:

“The Dead of the One Hundred and Seventy Seventh/35 Bodies Ungraved – Arrival of Capt. M.L. Filkins.

The Dead of the One Hundred and Seventy-Seventh
Thirty-five Bodies Ungraved – Arrival of Captain M. L. Filkins
From the New York Daily Times December 30th, 1863

On Saturday Morgan L. Filkins, of Albany, Captain in the One Hundred and Seventy-seventh (Albany) New York Volunteers (Member of Assembly elect), arrived in this city from New Orleans, on the Mississippi, having in his charge nineteen of the bodies of members of the regiment which had fallen before Port Hudson, or died in the Department of the Gulf from illness. Sixteen bodies he had sent in advance on the Merrimac, which arrived earlier last week, and they were at once forwarded to Albany.

Some time after the return of the regiment to Albany, the friends of the dead united in an urgent request to Capt. Filkins to revisit the scene of their service and recover their bodies. He finally assented, without ‘fee or reward,’ and on the 18th of November left this port, arriving in New Orleans on the 29th. At once he set to work on his painful and embarrassing duty, receiving from the officers of the Department of the Gulf all assistance that was in their power. Before leaving Albany he had metallic coffins made, and transportation of these from New Orleans was given free of charge. Capt. Filkins first visited, for the purpose of disinterment, Baton Rouge, where a number of the regiment had died from illness and from wounds. Here he disinterred six bodies – those of F. Platto, J. Guardenier, M. Daly, H.C. Mosher, J.W. Kelaler and S.B. Shepard (Adjutant of the Ninety first).

He then proceeded to Port Hudson, were this regiment, Col. Ainsworth, of Albany, in command, had been engaged forty-eight days and nights in the siege. Here he visited the battle field, and disinterred ten bodies buried on the field, and, as they were outside of the lines, he had to expedite matters, because of the incessant danger from the guerillas hovering around. The bodies were those of Lieut. Roache, Eugene Bronk, J. O. Leibenaw, J.D.Wood (Jesse D. Wood), W. H. Vandenburgh, A.M. Carhart, S.G. Loomis, A.S. Billson, T.L. Hartness, Joel Wilson.

On returning to New Orleans the body of J. McClaskey, Ninety-first regiment, who had died in hospital, was also disinterred. All the bodies were placed in metallic cases and transported to this city in the best condition possible. 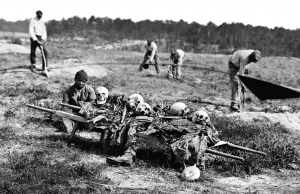 Capt. Filkins had comparatively but little trouble in discovering the graves. He had been on the ground and witnessed most of the burials. As all the places head-boards had been placed bearing the names, except at Bonnet Carre and Port Hudson. Here he know that the body of W.H. Barlow had been buried and buried alongside a man named Zulman; he found the grave of the latter, marked, opened the adjoining grave, and recognized by the long dark hair the remains of Barlow.

At the latter place the Captain had to open four graves ere he found one containing the body of A.S. Billson. On opening the last, he was enabled to recognize it as the right one by the rubber overcoat which was wrapped around the head of the deceased, and which bore his name. The body was placed in three cracker boxes, the intervening ends of each being broken out.

The bodies were all, of course, shockingly decomposed and the work of disinterment was one of horror. Capt. Filkins is a man who shrinks from no duty and he faithfully fulfilled this terrible one. His aids [sic] were contrabands [formerly enslaved people], who repeatedly shrank from the work. Many of the bodies were uncoffined; others were in rough boards, and a few in coffins, others in cracker boxes, and one in a gun-box. After opening the grave, the condition of the bodies was such, especially at Bonnet Carre, where the graves filled with water, that canvas had to be slipped under them, and they carefully raised on it, in order that they should not fall to pieces!

Capt. Filkins nobly stood the ordeal. He opened every coffin and every box; he cut from twenty-eight of the dead locks of hair for the relatives, and the closed to all eyes the remains. All were buried in their clothes, and were wrapped in the soldier’s shroud, their blankets.

At Port Hudson Capt. Filkins disinterred ten bodies and coffined them in two days. At Bonnet Carre he did the same with eighteen bodies in one day. At Baton Rouge he did the same with six bodies in a little over one day. When all the formalities and red tape are taken into consideration, to say nothing of the physical labor, for often had he to open the graves himself, and the horrors, this certainly exhibits extraordinary zeal and energy.

The friends of the deceased authorized Capt. Filkins an expenditure of $300 per day. He returns with them to Albany at a cost to the relatives of $50 each. This is pretty conclusive evidence that a generous heart and noble impulses were in the work, and that a painful duty, reluctantly undertaken, was truly a labor of love.

Of his regiment, which did much duty and won a proud name, some ninety yet lie on the banks of the Mississippi.

The bodies forwarded last week were placed in the cemetery built at Albany, to await the arrival of the others. They went up by the Hudson River Rail Road, which charged $3.10 for each, allowing no deduction from passenger fare. The nineteen others went up yesterday afternoon by the Harlem Rail Road, which not only generously forwarded them for nothing, by direction of Superintendent Burchard, but gave free passage to those in whose charge they were. 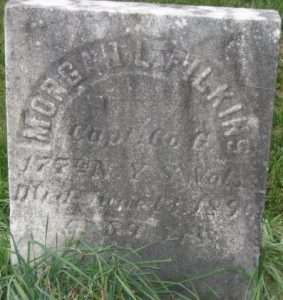 There will be a solemn scene in Albany when these thirty-five bodies of the devoted and the dead are consigned to the tomb. No city better appreciates such a sacrifice – none could so mourn the loss. It is the intention there to have a funeral pageant, and the occasion will be one of unprecedented significance and solemnity.”

Illustrations: A soldier stand over a Union soldier’s grave with the body of a Confederate left unburied in Antietam, Maryland in September 1862 (courtesy of Library of Congress); African Americans collect the remains of soldiers killed in battle near Cold Harbor, Virginia, in April of 1865 (Library of Congress); and Morgan Filkins’ gravestone in Albany Rural Cemetery.