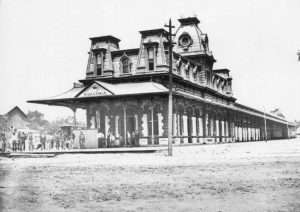 Throughout the 1800s and into the 1900s, Saratoga Springs was a premiere travel destination and the D&H Railway Station would be a hub of activity welcoming tourists, business people, and college students.

One station that remains is located at 117 Grand Avenue. It was originally the Adirondack Company Railway office and station and later became part of the D&H Railway’s Adirondack branch. The Foundation preserved the building and used it as its office for many years. (Read more about it here.)

Richard Chait will look at the many railroads that have served Saratoga Springs and the surrounding area through the years. These have included the following lines: Rensselaer & Saratoga Railroad; Thomas C. Durant’s Adirondack Company Railway; the Fitchburg Branch of the B&M Railroad; Saratoga, Mount McGregor and Lake George Railroad; Hudson Valley Railway Company; and the D&H Railway with its main line and Adirondack Branch.

This virtual program will begin at 7 pm and take place on Zoom and Facebook for a suggested donation of $10 or more. For additional information or to register for the virtual program visit the Saratoga Springs Preservation Foundation website or call (518) 587-5030.