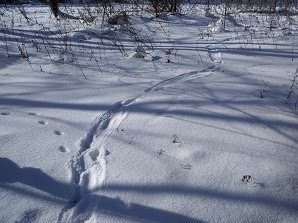 Have you ever seen a river otter in New York? Prior to the 1990s, river otters were absent from most of Central and Western New York.

That all changed between 1995–2001, when DEC worked with trappers and other groups to reintroduce 279 otter to 16 different sites in those parts of the state.

To evaluate the success of this effort and to gain a better understanding of otter populations throughout New York, DEC staff conducted over 2,000 winter sign surveys across the state in 2017 and 2018. During these surveys, biologists and technicians looked for otter tracks, latrines, and other signs of otter presence on the landscape. These surveys found that otter were well-established across the entire state and could be found in almost all suitable habitat.

This winter, DEC staff are repeating the winter sign surveys. They will compare the results to the previous surveys, allowing us to get a better idea of otter population trends and help them better guide otter management into the future.

How You Can Help

In addition to the survey data, DEC collects public sighting data for river otter and other furbearer species. If you have seen an otter, fisher, bobcat, weasel, marten, or snowshoe hare in Upstate New York (or otter, beaver, gray fox, weasel, mink, coyote, or skunk in Long Island/NYC), we encourage you to report your sighting.

Photo of river otter tracks and slides in the snow courtesy DEC.