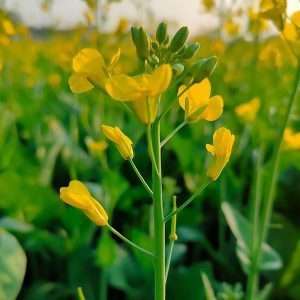 First domesticated in Central Asia some six-thousand years ago by ancient cultures looking for the best way to ruin shirts, mustard has evolved from zesty warm to blistering hot to the point that it’s now being developed as an ultra-low emission jet fuel.

Given the large size of the mustard or Brassica family – some 3,000 strong, according to Cornell University – it’s no surprise that it comprises historic food crops, showy flowers, noxious invasive weeds, and more.

For many of us, “mustard” is the yellow stuff that goes on hot dogs, then down our fronts. However, it also includes well-known vegetables like broccoli and cauliflower in addition to those species grown for use as a condiment. I imagine that unpretentious kin such as collards and kale, having fed humans for centuries, were shocked when some upstart varieties became celebrated bases of culinary oils in the 1950s. But this whole aerospace-propulsion scheme, announced in December 2021, is likely to send ripples through the family and cause more than a few turnips to stew and cabbages to give a cole shoulder.

Mustard species are native to the Old World, so it makes sense that’s where they were first cultivated. Here in North America, one of my favorite naturalized wetland plants is pepper-root, first introduced to me by the late New York State Department of Environmental Conservation forester Don Brown on a walk through my St. Lawrence County woodlot. The pleasantly pungent surface roots or rhizomes of this perennial ground cover live up to its Latin name Nasturtium officinale, which roughly translates to “official nose-turner.”

Like buckwheat, annual mustard varieties are widely grown around the world as cover crops. They grow fast and choke out weeds, prevent erosion, improve soil quality, and sequester nitrogen which would otherwise be washed away. White mustard (Sinapsis alba), indigenous to the Middle East and North Africa, is often planted in Europe. Wild species in the genus Brassica are also employed, as they tend to be more disease-resistant than many commercial varieties.

Also like buckwheat, these cover crops are tremendous sources of nectar for pollinators, but they must be plowed-down before they set seed or they can become persistent weeds in years to come.

Certain biennial mustards like the daikon radish are used in northern latitudes to break up compacted heavy soils. Their long roots penetrate clay hardpan layers, providing channels for air and water. Killed by freezing temperatures, they do not survive into the second year and thus cannot produce seeds and become a nuisance to forthcoming crops.

Although it was long known that mustard seeds could be processed to yield vegetable oil, it was typically greenish and pungent. A bigger issue was that it contained up to 50% erucic acid, a cardiac toxin. Canada pioneered the development of mustard as a viable oil source beginning in 1936, and through natural selection, introduced low-erucic acid (2% or less) mustard crops by 1950. Since the early 1990s, though, genetically modified mustard crops have become increasingly prevalent, especially in the US.

At first, oil from these novel varieties was called rape oil from the Latin rapa or turnip. For obvious reasons, marketers quickly changed rape oil to canola, a reference to its Canadian origin. Today, canola is the third-largest source of vegetable oil, with Canada providing around three-quarters of the world’s supply.

Per acre, canola mustard yields more oil than any other crop, including soy. For this reason, it is frequently used to make biodiesel. A short-season plant, mustard can be grown between other early-maturing crops such as peas, green, or garlic. In the southern US, it can produce seed in the winter months before major food crops are generally planted. Canola oil-based biodiesel is the polar opposite of corn-based ethanol, the most unsustainable, ecologically destructive fuel on Earth.

Of course no big families are without their problems, and mustard has a few noxious relatives. Garlic mustard (Alliaria petiolata), brought to the Americas as a culinary herb in the early 1800s, has become the scourge of woodlands, altering soil chemistry in its favor to the detriment of forest regeneration and native groundcover survival. More recently, garlic mustard’s colorful sibling dame’s rocket (Hesperis matronalis), adored by well-meaning wildflower gardeners, has evidenced the same bad behaviors. I have to wonder if the title “dame’s rocket” somehow presaged the use of mustard as jet fuel.

On December 09, 2021, the US Department of Agriculture (USDA) posted an article by Dr. Puneet Dwivedi of the University of Georgia about a USDA-funded study he led on sustainable aviation fuel (SAF). His team found that oil from the crushed seeds of Ethiopian mustard (Brassica carinata), also referred to simply as carinata, “…could reduce up to 68 percent of carbon emissions compared to a unit of conventional aviation fuel in the U.S.”

Dr. Dwivedi notes that “Carbon dioxide emissions from the aviation sector constitute 2.5 percent of global emissions.” Furthermore, he states that “Since it is a non-food crop, carinata-based SAF also avoids the food-versus-fuel debate. The residues after crushing carinata are high in protein and can be used as animal feed.” I hope that a researcher like this who has really put mustard on the map has at least one shirt with mustard stains.

You can read the full text of Dr. Dwivedi’s USDA study report online.