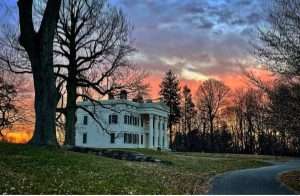 In 1992 the non-profit began executing their plan to transform the historic buildings and grounds of the landmark Jay Estate into a public park.

Working with preservationists, architects, and archeologists, they have invested in capital projects that made the structures and landscape safer and more sustainable.

At the same time, they have actively sought out and benefited from the input of scholars, civic advocates, volunteers, and partner organizations to imagine the narratives they could tell about our shared heritage.

Their goal has been to create a center for learning, accessible to all, where visitors can engage in dynamic, sometimes challenging, but balanced dialogues about American history, social justice, architecture, and environmental stewardship.

Over the next year, the organization plans to share highlights of the last 30 years, along with their regular menu of programs and experiences.

On February 16th, at 7 pm, Yale scholar and professor Dr. Elizabeth Hinton, author of America on Fire: The Untold History of Police Violence and Black Rebellion Since the 1960s, discusses her book via Zoom with journalist René Syler, former anchor of CBS News’s “The Early Show” and a frequent commentator on “CNN Headline News.”

America on Fire puts the protests over the killing of George Floyd in the summer of 2020 into historical context: “To many observers, the protests appeared to be without precedent in their scale and persistence,” Hinton writes, “the events of 2020 had clear precursors―and any attempt to understand our current crisis requires a reckoning with the recent past.” The book makes the case that Black rebellion “was born in response to poverty and exclusion, but most immediately in reaction to police violence.” You can register for the event here.

On May 6th, at 6 pm, National Book Award-winning historian Nathaniel Philbrick will be at Jay Heritage in person with his daughter, Rye resident, lawyer and former Harvard sailing captain Jennifer Philbrick McArdle, for a discussion of how the sport of sailing brought their family together.

Elizabeth Hinton is Associate Professor in the Department of History and the Department of African American Studies at Yale, with a secondary appointment as Professor of Law at the Law School. Her research focuses on the persistence of poverty, racial inequality, and urban violence in the 20th century United States. She is considered one of the nation’s leading experts on criminalization and policing. You can register for the event here.

On June 5th, at 2 pm, Marta McDowell, author of Emily Dickinson’s Gardening Life: The Plants and Places That Inspired the Iconic Poet will give a presentation in the Jay Heritage Center’s gardens. Dickinson is most often remembered as a literary giant, but she was also an accomplished gardener, ”sending fresh bouquets to friends, including pressed flowers in her letters, and studying botany at Amherst Academy and Mount Holyoke.” McDowell’s acclaimed book “explores Dickinson’s deep passion for plants and how it inspired and informed her writing.” You can register for the event here.

The Jay Estate in Rye is the childhood home of one of John Jay (1745-1829). Thanks to the efforts of its subsequent owners who cherished it and community advocates who saved it, this sylvan and historic 23 acre oasis, once part of an expansive 400 acre farm, still boasts a magnificent view to Long Island Sound.

More information about the Jay Heritage Center can be found at their website.

Photo of Sunset view of the Jay Heritage Center (provided).