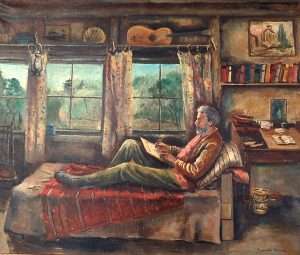 Conservation will be undertaken by Nadia Ghannam Fine Art Conservation.

The portrait of Hervey White by Arnold Blanch is one of the major representations of the writer and founder in the early 20th twentieth century of the Byrdcliffe and Maverick art colonies, located in the Woodstock/West Hurley, NY area of Ulster County. White is pictured seated on a couch in his still-existing cottage on Maverick Road, which he named Bearcamp for the Bearcamp River in Chicaurua, New Hampshire. Upon founding the Maverick in 1905, White took on the life of a part time farmer while writing novels and entertaining. He offered houses to kindred spirits, who paid modest rents when they were able to. He built the simple rustic cottages with his own limited funds, and at times with his own hands.

Woodstock was one of the great centers of landscape painting in America in the early 20th century, and the work by Edmund R. Rolfe is an exemplary painting of this period. The artist came to Woodstock in the early years of the twentieth century to study in Birge Harrison’s painting class at the Art Students League’s Woodstock School of Landscape Painting. Under the influence of Harrison and John F. Carlson, a major school of landscape painting developed in the town initially inspired by the aesthetics of Tonalism.

The NYSCA/GHNN Conservation Grant Treatment Program is made possible with public funds from the New York State Council on the Arts, with the support of the Officer of the Governor and the New York State Legislature. The Robert David Lion Gardiner Foundation has provided additional dedicated support for conservation treatment projects on Long Island.