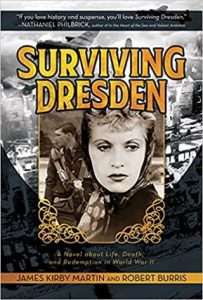 The Fort Plain Museum will host “Mixing History and Fiction: Writing the Controversial Story of the 1945 Bombing of Dresden,” a virtual presentation with Fort Plain Museum’s Board of Trustees Member and Military Historian James Kirby Martin set for Thursday, January 27th.

Surviving Dresden portrays the poignant and inspiring human struggle between good and evil in the search for peace during the last bloody days of the Second World War.

In this presentation Martin will examine the controversial bombing and destruction of the German cultural city of Dresden in 1945.

On the ground that horrific night is a courageous young Jewish woman, Gisela Kauffmann. Having just received orders to be herded off to a concentration camp, Gisela will do anything to save herself and her family. In the air, RAF bomber Captain Wallace Campbell is torn between his sworn military duty to bomb an unarmed city crowded with refugees, and his growing conviction that total war is immoral.

This program will begin at 7 pm and will be held via Zoom. Registration is required. For more information or to register, click here.