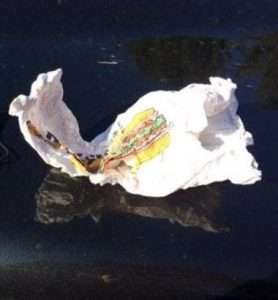 What follows is a report, prepared by DEC, of recent missions carried out by Environmental Conservation Officers (ECOs).

Sub Sandwich Leads to Illegal Deer Charges – St. Lawrence County
On November 9th, ECO Atwood received a report of a possible deer jacking in the town of Edwards. Once on scene, the Officer collected a discarded sub sandwich bag and a trail cam picture of a suspect vehicle. ECO Atwood then visited a local store that sells sandwiches and obtained video that identified the vehicle and suspects. The ECO confronted the suspects with the evidence and the two individuals confessed to illegally taking a doe.

Illegal Hunting from an ATV – Chautauqua County
On November 21st, ECOs Budniewski and Kinney received a complaint about an individual hunting from an ATV in the town of Ellery. After learning where the suspect would exit the woods, the ECOs waited in a hidden location. A short time later, the suspect exited with a deer, was questioned by the Officers, and admitted to shooting the buck from his ATV. The ECOs issued tickets to the hunter for taking an illegal deer, possessing a loaded firearm on a motor vehicle, using a motor vehicle to take wildlife, and possessing an untagged deer. One month later, the suspect appeared in court and paid more than $700 in civil penalties and faces revocation of his hunting privileges for up to five years.

ECOs Conduct Hunting Enforcement Detail – Niagara County
During the early afternoon hours of November 28th in the town of Royalton, ECOs Scheer, Wolgast, Holzle, Fonda, Godson, Fuerch, and K-9 Handley conducted an enforcement detail one week into the Southern Zone Regular Big Game Season. Officers observed a few Environmental Conservation Law violations during the detail, including three loaded firearms in motor vehicles, two untagged deer, and an individual failing to report a deer harvest within seven days. ECOs were pleased that the majority of the hunters followed all hunting regulations while afield and Officers were impressed by hunters’ harvests and stories.

Tracks in the Snow Lead to Suspects in Illegal Deer Take – St. Lawrence County
On November 29th, ECO Jackson was patrolling an area in the town of Lorraine known for deer jacking. The Officer observed a spotlight in a field a short distance from his location and moments later, heard a single gunshot ring out from the same area. ECO Jackson rushed to the field, but the shooter took off into the woods. Lieutenant Bartoszewski responded to help ECO Jackson track down the culprits and identified two separate sets of shoe prints in the freshly fallen snow. They found a dead spike horn buck in the field. The Officers followed the tracks through the field and into a swamp where they made their way out of knee-deep water toward a roadway where the suspects were likely picked up by a vehicle. ECO Jackson, Lt. Bartoszewski, and Investigator Malone returned to the location over the next few days. After interviewing suspected poachers, two individuals confessed. The Officers seized the weapon used in the incident and issued appearance tickets to the shooter for the unlawful take of protected wildlife, taking whitetail deer with the aid of an artificial light, and hunting during closed hours. The case is pending in the Town of Lorraine Court.

Pennsylvania Violation – Chautauqua County
On December 14th, while checking several deer processors in Chautauqua County, ECO Kinney encountered a hunter who did not report his deer harvest. After speaking to the hunter, Officer Kinney learned the subject possessed a resident big game hunting license despite living in Pennsylvania. ECO Kinney cited the hunter for taking an illegal deer, making a false statement while applying for a license, and for being a non-resident hunting without a valid license during archery season. A week later, the man paid a $550 civil penalty for the violations.