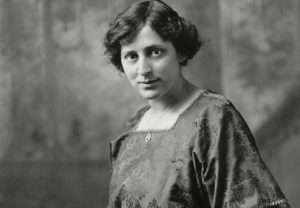 Crystal Eastman (1881-1928) deserves more attention from historians. “In the early twentieth century, Crystal Eastman was one of the most conspicuous Progressive reformers in America,” says Amy Aronson, in her biography Crystal Eastman: A Revolutionary Life. “Her militant suffragism, insistent antimilitarism, gregarious internationalism, support of the Russian Revolution, and uncompromising feminism, led some in the press to brand her notorious.” Yet, “today she is less known than might be expected, especially given the rarity of a woman with such wide political influence and her continuing international legacy in so many high-profile struggles.”

This extraordinary progressive activist was a multi-issue advocate, an energetic researcher, a prolific writer, and a talented speaker. Much of her work was aimed at assembling evidence on issues and conditions, persuading others to act on that evidence, and showing them the path forward. Much of what she did was behind-the-scenes, setting up others for success and giving them the credit. Her role in creating New York’s workers’ compensation program, the first such state program in the nation, in 1910, is largely unknown.

Industrial accidents injured, maimed, and killed hundreds or workers annually at the turn of the century. Machinery in factories, railroad construction and operation, and building construction were particularly dangerous. A few companies adequately compensated workers or their families in case of death. Workers seldom purchased insurance themselves; it was just too expensive.

Most employers were self-insured or carried limited liability insurance. But reimbursement was small and suing in court for an adequate settlement was expensive and problematic. A worker had to prove he or she was in no way to blame for the accident and that fellow-workers had not contributed to its causes either (the so-called “fellow-servant” rule). Even then, company lawyers often convinced juries that “assumption of risk” was something workers willingly accepted and acknowledged as a condition of employment.

There had to be a better way. Crystal Eastman was a guide in finding it.

Eastman’s first major contribution was to carry out a detailed study of accidents in the Pittsburgh region. The study was funded by the Russell Sage Foundation in New York, which was dedicated to improving the condition of working people. Eastman’s work graphically recorded the maiming and killing of workers (many in the railroad and steel industries) over a one-year period. Many of the accidents were not due to the workman’s actions or to errors by others; they just were inherent in the dangers of industrial production. She documented the suffering of the injured and the devastation to widows and children of men who were killed. Striking photographs showed maimed men and families devastated by the loss of husbands and fathers.

Recovery of compensation in courts was very rare, the amounts awarded low, the study showed. Eastman made clear that the conditions she described existed not just in Pittsburgh but also in New York and elsewhere in the nation.

Eastman identified a model solution: the English Employer’s Liability law, enacted in 1897 and updated and expanded since then, under which companies paid for employees’ injuries. Her report, Work Accidents and the Law, was published early in 1910. She broadened the distribution of its key findings through a popular booklet Employers’ Liability: A Criticism Based on Facts, and articles in journals. Her work sparked broad public discussion of the issue and the need for better public policies to address it. Soon her work was joined by others that reinforced its central message. 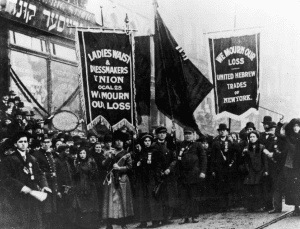 Eastman’s work led to her appointment by governor Charles Evans Hughes to a state commission created that year to study industrial accidents and propose a new state program to ensure workers were compensated for accidents. It was a distinguished commission, chaired by Westchester Assemblyman J. Mayhew Wainwright. Eastman emerged as a standout in the group, the best investigator and chief advocate for a new system. Support from the legal community would be critical, since lawyers represented companies and injured workers in injury lawsuits. She spoke at the January 1910 meeting of the State Bar Association, an extraordinary event because few women spoke at their conferences.

Eastman gave a stellar address. Citing evidence from her Pittsburgh study and the state commission’s investigations, she argued that the burden of injuries fell heavily on workmen and their families; the widows and families of men killed on the job were often reduced to desperate financial straits; the fellow-servant and assumption-of-risk doctrines were unfair and outdated; and an employers’ liability law would increase safety precautions on the job.

An employers’ liability law undoubtedly would increase insurance rates but New York, she conceded, but industry could bear the cost since it was in a “flourishing condition” and other states could be expected to follow New York’s lead in enacting similar laws.

The Commission concluded its work and issued its report in March 1910. There was no acknowledgment in the report of its actual author. But its assembly of evidence, analysis, conclusions, and recommendations, bear a strong resemblance to Work Accidents and the Law. It is reasonable to conclude that Crystal Eastman was a principal author of the commission report.

“An astounding number of workers” are injured each year said the report. “There is general dissatisfaction with the present system of employer’s liability” which is “intolerable.” Four objections to the status quo were cited:

The report presented an array of statistics on accidents. It described the frustrations of employees who had to resort to court after being injured on the job and the dissatisfactions of employers who had to defend themselves there. Looking for models, it endorsed the English 1897 employer’s liability law (just as Eastman had in her study). That law largely negated the assumption of risk, contributory negligence, and fellow – servant doctrines. It required employers to make payments for employee injuries and deaths.

The commission recommended a bill that was largely modeled on the English law, modified for New York State. It would apply to hazardous callings only (just as the English law had at first) but for them the requirements would be compulsory. Other companies could opt into the system if they wished. 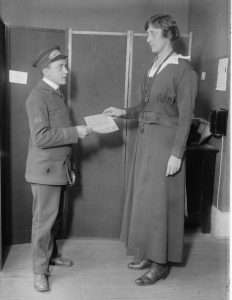 Legislation was drafted in the spring to implement the report. Wainwright and the commission’s counsel, Joseph W. Cotton, led the way but, judging from the wording of the bill, it is reasonable to identify Crystal Eastman as one if its principal drafters. The bill underwent some modifications in the legislature, but eventually business and labor both (somewhat grudgingly) accepted it. The new law would replace the current system which no one liked and would encourage industries to step up workplace safety. After a good deal of negotiating between governor Hughes and legislative leaders, the legislature passed the law in June (Laws of 1910, Ch. 474).

The new program was a dramatic departure from past practices. It proved to be too great a leap for the Court of Appeals, which invalidated it in 1911 (Ives v South Buffalo Railway Company, March 24, 1911). It was not authorized by the state constitution, said the court. But the decision praised the commission’s report for its investigation and documentation with “a most voluminous array of statistical tables, extracts from the works of philosophical writers and the industrial laws of many countries, all or which are designed to show that our own system for dealing with industrial accidents is economically, morally, and legally unsound.” It also acknowledged that some provisions were clearly within the legislature’s authority.

The decision led to a renewed effort by advocates, including Eastman, resulting in a constitutional amendment and an even stronger workers compensation law in 1913. In 1910, New York had been first; by 1913, other states had followed in its wake and learned both from the program it enacted and the courts’ reservations about it. In turn, the 1913 New York law reflected the experiences of other states over the previous three years.

The courts approved the 1913 workers’ compensation act in 1915. The program it established is still in effect today.

Crystal Eastman had an important impact on New York and American history. But she was modest, self-effacing and content to savor the indirect results of her work without claiming credit. She was inclined to move on to the next grand cause without celebrating victory in the current one. “What we want to do is to start a revolution,” she wrote in 1911. “Statistics are good stuff to start a revolution with.”

Photos: Above, Crystal Eastman in ca. 1914; demonstrators gather to remember workers killed on the job during the Triangle Shirtwaist Factory fire in 1911 (courtesy Kheel Center of Cornell University); and Crystal Catherine Eastman at work in 1915 (photos courtesy Library of Congress).