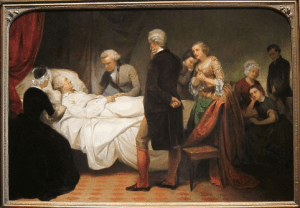 December 12th, 1799, was a freezing cold day in Virginia, but the weather conditions did not stop President George Washington riding out on horseback for the daily inspection of his Mount Vernon plantation. On return, he developed a fever and respiratory distress.

As there were no means to diagnose or treat a bacterial infection, doctors believed that bloodletting would improve a patient’s condition. In addition to the application of crude purgatives and emetics, over half of Washington’s blood was drained in just a few hours. Today, it is widely held that the President died from aggressive bloodletting which resulted in severely low blood pressure and shock.

Recurrent yellow fever epidemics in Philadelphia and George Washington’s medical treatment contributed to a fierce politico-medical fall out in which the issue of bloodletting took center stage.

In medieval Europe, bloodletting was used in treatments ranging from plague and smallpox to epilepsy and gout. In many cases the procedure was carried out by clergymen who cared for the sick. In 1163, Pope Alexander III prohibited monks and priests from the “horror” of bloodletting. In response to the injunction, barbers stepped up to take their place and offer a range of services that included pulling teeth, setting bones, and even amputations.

The respective roles of barbers and surgeons in London were finally defined by an Act of Parliament in 1540 which created the Company of Barbers and Surgeons. It was not until 1745 that surgeons left the Company in order to form their own college. The barber’s pole is a reminder of the bloodstained towels that would hang outside the premises of barber-surgeons.

Whilst its medical roots lie in ancient humoral theories, by the eighteenth century bloodletting had become a leading treatment for a wide array of conditions. Practitioners nicked veins or arteries in the forearm or neck, using a venipuncture device known as a “fleam.”

Both in Europe and America, the practice of bloodletting aroused controversy between practitioners and detractors about the benefit and/or harm of venesection.

The Bleeding Physician of Philadelphia

The main American proponent of bloodletting was Benjamin Rush, the most distinguished physician of the day. As one of the signatories to the Declaration of Independence he was also a prominent politician with a strong concern for public health. When the yellow fever epidemic in Philadelphia broke out in 1793, killing nearly ten percent of the population, Rush took on a leading role in battling the disease.

Rush held a firm belief in the curative powers of depletion therapy. His almost messianic message led to many doctors adopting his bloodletting methods, including those who had treated President Washington during his final hours. His practice aroused controversy amongst physicians. Some referred to his routine as “murderous.” He had a long-running feud with his college of physicians which forced him to resign. His application to the faculty of New York’s Columbia Medical School was rejected.

Then and now, once faced with the frightening power of an epidemic or pandemic, discussions soon stop to being conducted within a purely medical context and become political. In the late 1790s, Federalists rejected bloodletting, arguing that yellow fever was a communicable disease. Their opinions were loudly condemned by Democratic-Republicans (the Jeffersonians) who stood squarely behind Rush’s methodology.

When yellow fever hit Philadelphia in late July 1797, the war between the camps was fought in print. John Fenno’s Gazette of the United States newspaper compared Rush’s treatment of patients to that of the guillotine during the French Revolution. The most vocal opponent of Benjamin Rush was the English journalist and social commentator William Cobbett. Publishing his columns in the popular Porcupine’s Gazette, he remorselessly attacked his opponent as the “Bleeding Physician of Philadelphia.” In the end, Rush decided to sue Cobbett. It was one of the first professional libel lawsuits in the United States.

Cobbett lost the case on December 14, 1799, the very day that George Washington died, and was ordered by the Pennsylvania court to pay Rush £5,000 in damages. Shortly after William returned to London, hurt and angry, but not after publishing mortality statistics that showed that the number of deaths in the city had increased after Rush had begun his bloodletting campaign. It was a first step in the development towards evidence-based medicine. For Rush, it proved to be a Pyrrhic victory. His reputation was tarnished and his practice floundered. 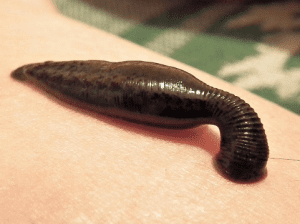 The Vampire of Medicine

The horror stories of aggressive bloodletting forced physicians to search for alternative methods. Slicing open a vein was painful and messy. Lancet and fleam were gradually abandoned for the leech.

Leeching is the application of a living parasite to the skin in order to initiate blood flow or deplete blood from a localized area of the body. The species most commonly used for this purpose was an aquatic segmented European worm known as Hirudo medicinalis. Leeches have three jaws and a hundred teeth; they consume about five to ten milliliters of blood at each feeding, almost ten times their own weight.

The use of leeches was greatly influenced by François Broussais, a French military surgeon who had served under Napoleon, and later acted as Professor of Pathology in Paris. He claimed that all fevers were due to specific organ inflammation and was a great proponent of leech therapy. He believed in placing leeches over the bodily organ that was deemed to be inflamed. For his habit of bleeding patients with fifty leeches at a time draining up to eighty percent of their blood, he was nicknamed “le vampire de la médecine.”

By the 1830s his therapy dominated the French medical world where five to six million leeches per year were used in Paris alone and about thirty-five million in the country as a whole. The medicinal leech evolved into a lucrative commodity in great demand for medicine throughout Europe and the United States.

By the early 1800s, the European leech trade ran into the millions of animals, resulting in the depletion of indigenous populations and an increasing dependence on imports.

How were leeches gathered? In the course of the nineteenth century, leech collecting became a cottage industry in a landscape that provided bogs and marshes. Sometimes collectors would send in old horses in the knowledge that their legs would attract the bloodsuckers, but it was more commonplace for leech finders to use their own legs, gathering the creature after it had finished sucking enough blood (for twenty minutes or more!).

In stanza 15 of a poem entitled “Resolution and Independence” (written in 1802; published in 1807), William Wordsworth described the hard and solitary life of an old leech gatherer who earned a living by allowing his legs to serve as bait for the parasites:

He told, that to these water he had come
To gather leeches, being old and poor:
Employment hazardous and wearisome!
And he had many hardships to endure:
From pond to pond he roamed, from moor to moor;
Housing, with God’s good help, by choice or chance;
And in this way, he gained an honest maintenance … 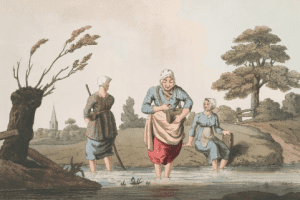 Images are scarce, but in 1814 George Walker published a book on The Costume of Yorkshire which includes an engraving of women collecting leeches. In an accompanying commentary the author notes that those who were involved in the seasonal activity were predominately poor Scottish women. Many of those active in the profession suffered from the effects of the loss of blood and infections spread by the parasites.

The demand for leeches in England soon outstripped supply. Prices rose sharply and native sources dried up. Importation from France was precluded by the ongoing Napoleonic Wars. 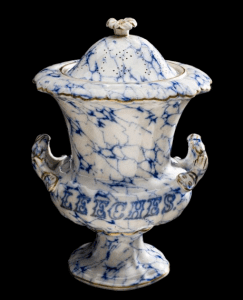 n 1703, during the War of the Spanish Succession (Queen Anne’s War in the American colonies), Portugal and Britain signed a military and commercial agreement negotiated by John Methuen, British Ambassador Extraordinary to Portugal. The terms of the Methuen Treaty allowed English woolen cloth to be admitted into Portugal free of duty. In return, wines imported into England would be subject to minimal duties. It was the beginning of Portugal’s fortified wine industry.

By the start of the second decade of the nineteenth century, Portugal supplied England with leeches collected primarily in the coastal and northern regions. Although advertised as “Lisbon Leeches,” they were geographically focused on Porto. England became a major importer of port and leeches.

When in 1812 Napoleon retreated from Moscow, a young man called Henry Potter was hanging a sign above his premises in Fleet Market, Farringdon Street, which said “Seedsman, Herbalist and Dealer in Leeches.” By the time he retired in 1846, the lucrative market had been taken over by an immigrant from Germany.

Lesser Friedlander was born in 1809 in Cuxhaven, Lower Saxony, into a Jewish family. He was in London by 1834 when he was recorded as selling cigars and leeches from Haydon Square, Aldgate. He then relocated to no. 3 Houndsditch where he built up a leech empire. Importing his product directly from Hamburg, he set up a network of agencies in Newcastle, Liverpool, Glasgow, and Belfast and dominated the trade for the following four decades. 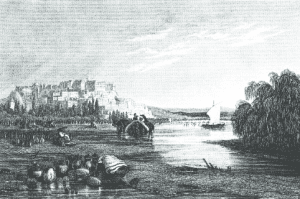 Worldwide demand for leeches fueled the beginnings of an organized commercial trade that reached across the Atlantic. Leech mania hit the Americas (Brazil became a major market). In the absence of a suitable alternative, America depended on the European market and Lisbon leeches dominated the lucrative trans-Atlantic route throughout the 1820s. During this decade Portugal had little maritime competition. Leeches sailed from Portugal (either directly or via Liverpool) to New York and Philadelphia.

The earliest identified record of leeches being imported into New York dates from March 8, 1821, when an advertisement was published in the Evening Post that announced the availability of Lisbon leeches in Manhattan:

Just received and for sale at no. 16 Maiden-lane,
A number of fine Portugal LEECHES.

By the early 1830s, the limited sources in coastal Portugal had been exhausted. Thereafter, a new source was found further south in Morocco, from where large numbers of leeches were shipped via Lisbon (still carrying the brand name of “Lisbon leeches”). The substantial trade continued to the early twentieth century.

Leech frenzy had started in France; its decline began in the same country. Physician Pierre Louis was suspicious about the theories that had been made popular by his teacher François Broussais. His assessment of the efficacy of bloodletting (one of the first cases of evidence-based medicine), led him to the conclusion that the impact of the procedure was dubious if not dangerous. Louis pleaded for the practice to be abandoned.

His pioneering calls were ignored, but later research by Louis Pasteur, Rudolf Virchow and other bacteriologists dismissed the value of bloodletting as a miracle cure. Although still used on occasion in medicine today, the leech had reached the end of its remarkable journey and was reduced to a mere metaphor for sponging.