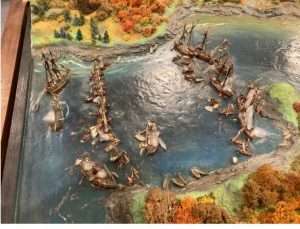 The Clinton County Historical Association has announce it has received a Conservation Treatment Grant from the Greater Hudson Heritage Network for the conservation of a diorama created by Adirondack artist and theme park creator Arto Monaco (1913-2003).

The diorama was a gift from the Plattsburgh Rotary who commissioned the work for the 1976 United States Bicentennial celebration. It’s been moved to several locations over the years, resting finally within the CCHA Museum at 98 Ohio Avenue on the Old Base Museum Campus in Plattsburgh, NY. 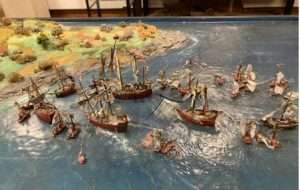 The diorama depicts in exceptional detail both the Battle of Valcour Bay and the Battle of Plattsburgh and is used to help tell the story of the Lake Champlain battles that influenced the entire history of the nation.

For more information about the Clinton County Historical Association, visit their website.