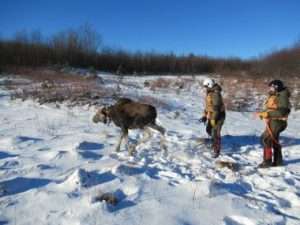 The New York State Department of Environmental Conservation (DEC) has announced the start of a new moose research project in the Adirondack region. This winter, 14 moose were fitted with GPS collars as part of a multi-year project assessing moose health and population.

To safely capture, collar, and monitor these animals, DEC partnered with researchers at the New York Cooperative Fish and Wildlife Research Unit and the College of Veterinary Medicine at Cornell University, the State University of New York College of Environmental Science and Forestry (SUNY ESF), and Native Range Capture Services.

Additional moose will be equipped with GPS collars in years to come, which will provide location data and information on moose activity patterns, movements, and mortality. Data collected as part of this research effort will contribute directly to the continued management of moose in New York.

Previous moose research in the Adirondacks has helped researchers better understand adult moose survival and reproduction, but little is known about calf survival and dispersal in New York. By collaring calves and monitoring their survival to adulthood, biologists will be able to investigate factors limiting moose population growth such as the effects of parasites on juvenile moose survival. These parasites, including winter ticks, brain worm, and giant liver fluke, and their associated diseases have increasingly become a management concern in the northeast and elsewhere. For example, winter tick infestations can be a major cause of moose mortality, particularly with calves.

The research is funded by a Federal Aid in Wildlife Restoration grant through the U.S. Fish and Wildlife Service. These funds are collected through federal excise taxes on firearms, ammunition, and archery equipment, and then apportioned to states for wildlife conservation.

The project also includes sampling white-tailed deer pellets and water sources to detect and better understand the prevalence and distribution of brain worm and giant liver fluke across the landscape. Larvae from these parasites are found in deer scat, where they are picked up by snails and then incidentally consumed by moose as they forage on plants. Biologists also deployed trail cameras this past fall to determine range overlap between deer and moose, and monitor hair loss on moose infested with winter ticks.