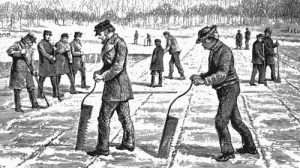 It was a frigid January at Glens Falls in 1883, which was good for the ice men.

“The ice in the river at this point is now twelve inches thick,” The Morning Star reported on January 4th. “Several ice men announced they will commence their annual harvest on Monday.”

On January 12th, it was 22 below zero at Allen Brothers paper mill at Sandy Hill, now Hudson Falls, and 24 below at Cazavant’s barber shop at Glens Falls, The Argus of Albany reported January 13th.

It was 20 below at Whitehall and 10 below at Port Henry and Plattsburgh.

Yet the icemen still were wary of indications of a thaw.

“The ice men along the river, as is generally known, are very superstitious in regard to signs of the weather, believing, for instance, that the crowing of hens at mid-day portends an unfavorably mild temperature,” The Argus reported on January 14th.

“Reports from down the river indicate that a larger crop of ice will be harvested this year than ever before,” The Morning Star reported on January 21st. “Many new ice houses have been built, and yet about all of the storage room is occupied and ice is being stored in many places.”

As of January 26th, the ice harvest had reached 3 million tons, at a cost of about 18 cents a ton, The Morning Star reported.

“Nearly all the houses are filled and closed. The ice is now being stacked in large piles, and will be shipped to southern points as soon as navigation opens.”

The opening of January 1886 was out of character enough to fool even the birds.

“The weather yesterday had all the appearances of spring,” The Morning Star reported on January 4th. “Those who passed through Warren Street in the early morning found an almost countless number of sparrows chirping merrily in an evergreen tree.”

Seasonal temperatures did materialize, and at midnight on January 10th it was zero at Stewart’s Crockery Store in Glens Falls, whose owner was an amateur weather statistician.

“The heavy snowstorm yesterday prevented the street cars from making their usual half-hourly trips, although the snow plow was run at intervals to keep the track clear,” The Morning Star reported on January 20th.

The snow may have caused delays, but it did not stop commerce.

“For all the bad roads, yesterday was the liveliest day of the month, save New Year’s Day, farmers putting in an appearance with pork and produce, and trading largely,” the Sandy Hill correspondent reported in The Morning Star on January 21st.

In January of 1887, it was back to deep-freeze weather as usual.

On January 3rd, it was 20 below zero at Stony Creek, in northern Warren County, 30 below zero at some places in Caldwell, the village now known as Lake George.

“The cutting of ice on the river was commenced yesterday. The cakes are about thirteen inches thick and of excellent quality,” The Morning Star reported on January 4th.

It was not too cold on January 9th for a baptism.

“A gentleman who drove to Glens Falls from the northern part of the county, yesterday, reports that Sunday last a man was baptized in the stream at North River, in the town of Johnsburgh,” The Morning Star reported on January 13th. “The thermometer at the time was several degrees below zero.”