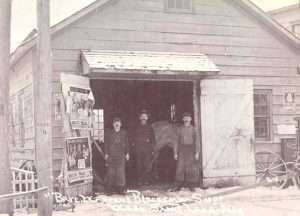 Throughout the 19th century the blacksmith’s shop was a central part of American life. Even the smallest forge was kept busy mending and making the variety of tools and implements for home and garden, for workshop and industry, and tack and shoes for mules, horses and oxen. Blacksmiths were critical to transportation, manufacturing and home life.  Like today’s auto garage, nearly every substantial crossroads had a blacksmith’s shop.

Better shops included the blacksmith, a fireman, a helper, and sometimes a furrier. In 1850 there were more than 150 blacksmiths in Troy, NY, a city of about 30,000 people, including one woman, Canadian Cyrilla Turcott. About half of these smithies were born in Ireland. More blacksmiths of all skill levels could be found in the city’s wagon, carriage and wheelwright shops, or employed in the city’s booming iron industry.

In the first half of the 19th century, the blacksmith held a sort of minor nobility in American life. He was strong, well informed about his community and more able than others to care for himself, for he made most all he needed. The blacksmith’s shop – along with the inn and church – stood at a corner of social life in the village and the city.

In the 1840s when Thomas Mooney visited the United States from Ireland he saw that “everyone… requires work to be done at the forge; the blacksmith makes the personal acquaintance of all, poor or wealthy; he is their counselor in all matters of a perplexing nature. All local improvements are debated in his miniature lyceum.” The smoke from the forge, the working of the bellows, and the ring of hammer and anvil gave the blacksmith shop a sound and smell that carried across the neighborhood and called men and boys together on errands for work or home. 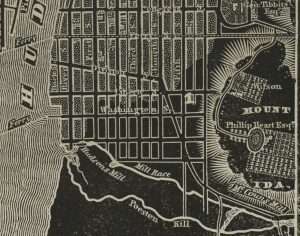 While at the blacksmith shop sporting men might find a game of dice, cards, a wrestling match or cock fight, or an opportunity to match a horse. In small talk, to establish bragging rights or just gossip, many in this group of men and boys were “jolly fellows” who were often involved in unrestrained drinking, gambling, pranks, and fighting.

Many an early 19th century blacksmith became a well-known sporting man, including Heavyweight Champion John Heenan and professional gamblers Louis Bieral, Matt Danser, John Petrie, and William Farley, known as Reddy the Blacksmith. In the rough neighborhood of the Five Points in Troy, was the blacksmith shop of John Barron, whose son “Blacksmith Dan” served as one of Heavyweight Champion John Morrissey’s first trainers.

John arrived in Troy from Ireland in 1830 and died just six years later leaving his wife Anna widowed with several children: Caroline, the eldest, was just 15 when her dad died; Dan, was only 13; Morris just 6; and little Michael, known as “Mick,” was then age 4. Anna quickly remarried, to Edmund Daly, which brought another child into the household, John Daley, born in 1838.

Edmund Daly was a stonecutter and Caroline a teacher. Young Dan Barron apprenticed at a nearby blacksmith shop, before taking up his late father’s old profession on Hill Street in the Five Points at the age of 20. It was in this shop that the Barron brothers (by then Morris was 13 and Mick nine) would meet the older men of their world and form the associations with other boys that would last a lifetime.

In 1848 local education advocates estimated that 4,000 children did not attend school in Troy: “It has been discovered that when nothing else engages their attention, these boys fight among themselves, and it is not an unfrequent thing to see in some back lot, or in some alley, two urchins, stripped a la Hyer and Sullivan, surrounded by a ring of their companions, pounding each other, according to the latest rules of the ‘manly act of self-defence.’ The scene, as a general thing, concludes with a fight among the whole gang.”

Blacksmith Dan Barron’s shop was a center for these activities. Dan’s later role as a backer and trainer for heavyweight contender John Morrissey suggests he was involved in arranging fights from his shop. His brother Morris Barron was one of Morrissey’s closest friends, who regularly bragged he had seen every fight Morrissey ever took part in. Like Morrissey, Morris Barron would become a professional gambler, a faro banker, and among those who made the game of Boston popular. He took over Morrissey’s Ivy Green saloon in Troy when the Champion moved to New York.

Several years younger that Dan and Morris Barron and John Morrissey, brother Michael Barron took a darker turn, became a petty thief, and served time in Auburn Prison for assault of his arresting officer. Around the same age as Michael, was step-brother John Daly. Daly began as a petty thief with his step-brother Mick, and also served time in prison, but soon turned to professional gambling.

When John Daly died in 1906 it was claimed he was the wealthiest gambler in America and his club at Long Branch, New Jersey was rivaled only by that of his old friend John Morrissey’s at Saratoga Springs. The Barron brothers’ sister Caroline married John Daly’s partner James O’Connor. John Daly never forgot his roots in Troy, and throughout his life sent a monthly allowance to Mick Barron’s son and his family.

Also circling the Barrons and John Morrissey were other friends. John “Jack” Hackett was among the most successful of these. He made his way to California during the Gold Rush of 1849, and returned to a career as a bookmaker, becoming a pioneer in pool selling for horse races. Hackett partnered with Peter DeLacy, operator of gambling houses in Ann and Barclay Streets and Park Row in Manhattan, streets that were for a time the home of professional gambling and book-making in the city of New York. 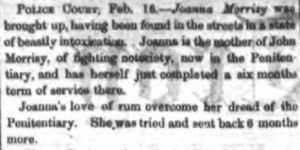 Daniel Cunningham was almost surely there, having worked for a short time as a wallpaper stainer alongside Morrissey as kids. The two would become the closest of friends, traveling together to the Gold Rush. In the early 1850s they were inseparable and venerate gamblers, roommates in the 5th ward of the city of New York. He stood only 5 foot 4 inches but Cunningham got the name “Dad” for the way he looked after Morrissey.

Cunningham provided an alibi when Morrissey was falsely accused of involvement in killing the butcher Bill Poole and he shot and killed the notorious bully Paudeen McLoughlin in self-defense in 1858. Thereafter a long-standing illness increasingly diminished his already small frame to less than 100 pounds and he died at 35, all but forgotten, if not for his friendship with John Morrissey.

Paul Kaveny, the same age as Morrissey and Morris Barron, was another close friend. He would partner with Morrissey to open the Ivy Green in Troy, a sporting man’s headquarters in the late 1850s. He afterward established his own saloons on Congress Street, where betting on cockfights was popular.

Some older boys, links to Troy’s more adult sporting men, were also centered on the Barron blacksmith shop in the Five Points neighborhood in the 1840s. Among the closest was William Wallace Patrick, known as “Wally.” About 5 or 6 years older than Morrissey, Morris Barron and Daniel Cunningham, Wally was also better off.

He became a partner in the Troy Match Factory in the late 1840s with Cornelius Bonesteel, and lived in his mother’s boarding house, a favorite of actors. He joined the fire department, became politically active, ran numbers in Troy and New York and reported his occupation as sporting man in 1860.

When Wally Patrick died in 1872 a fairly wealthy man, he appointed John Morrissey to administer his estate.