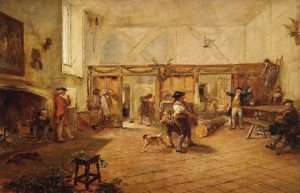 Apparently, if you didn’t have a leftover bit of this log remaining after the marathon burn, you were doomed to misfortune in the upcoming year. The remnant piece of charred wood was tucked away in the ceiling and was used to light the following year’s Yule log. I assume it was extinguished before being squirreled away in the rafters or some really bad luck would ensue.

While a birch log is charming, it doesn’t compare with many other hardwoods in terms of heat value and how long it will burn. Heat value from wood and other fuels is measured in British thermal units (BTUs), one BTU being the energy required to heat a pound of water one degree Fahrenheit. If you look at firewood BTU-value charts you’ll see that few of them agree exactly.

This is to be expected, as the heat value of a given species varies according to the conditions in which it grew.

In this region, fuel wood is usually hardwood. Of course that’s a misnomer, as some “hardwoods” are softer than “softwoods” or conifers. Eastern cottonwood, for example, has a
rating of around 12 million BTUs (mBTU) per full dry cord, lower than that of white pine, which is rated at 16 million. Remember that a full cord of wood is 128 cubic feet; typically 4 feet high x 8 feet long x 4 feet deep, while a face cord is only 16 inches wide x 4 feet high x 8 feet long.

As those who heat with wood know, hickory and hard maple are tops among native species, producing close to 29 mBTU per full cord. You’d have to burn twice as much butternut to get the same amount of heat. American beech, white oak and ironwood (hop hornbeam) also rate quite high, around 25 mBTU/ full cord. The iconic paper birch has about 20 mBTU, respectable but not a premium fuel.

Of course there are other considerations aside from BTU value in choosing firewood. Even though balsam fir heats better than butternut, it throws a lot of sparks, creating a potential hazard in an open-hearth fireplace.

Moisture is also critical. When green wood is burned, much of the wood’s heat value goes into boiling off the water, not to mention that it leads to heavy creosote buildup. Black locust and apple, two non-native species which have widely naturalized throughout the province, have BTUs per volume higher than the best native species. But fresh-cut apple is 70% water by weight. Assuming you could even keep it lit, you’d get about a third of its potential heat value.

Outdoor furnaces are capable of burning green wood because they have a blower. This might be seen as a convenience, but when unseasoned wood is burned in an outdoor furnace, it generates at minimum twice the carbon dioxide, costs more than two times as much, and takes at least double the time to load the firebox. I don’t know about you, but if I had to choose between lifting six tons of wet wood as compared to three tons of dry wood over the course of a season, it wouldn’t take long to decide. 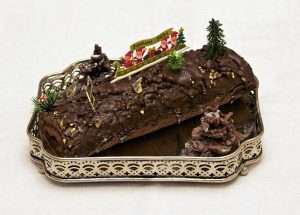 In the Balkans and parts of southern Europe a genuine Yule-log tradition still burns on. In Québec and other regions as well, a much tastier version is popular – the Yule cake or Bûche de Noël is a time-honored Christmas dessert. The Bûche de Noël is seldom burned, however, and never intentionally.

You can tune in to online or televised Yule Log programs this holiday season. While there are many now, the original has been going since its initial appearance back in 1967.

Considering that the first TV Yule log was lit fifty-plus years ago, we could probably solve the world’s energy problems if we determine what species of wood was used and simply plant a few of those trees in our yards. Of course a lot of secret Cold-War research was conducted in the 1960s, so it might be classified. Maybe this will spark a new batch of conspiracy hypotheses as to why we’ve been kept in the dark about this super-Yule wood.

If you’re one of the few families who will light an old-fashioned Yule log in an open hearth this year, you probably will select a good chunk of a premium hardwood species. Given the
information above, I’m sure Yule choose wisely.