Jeremias’ constant conflict with Stuyvesant and his possible establishment of overland fur trade with the English in Massachusetts, avoiding Peter Stuyvesant’s tax collections in New Amsterdam (New York City), may have facilitated the English take-over.

The English felt that the entire area populated by the 13 colonies belonged to them as part of the land claimed by Sir Walter Raleigh during his explorations in 1584. English officials in Boston had sent threatening letters to the Dutch in New Netherland telling them not to construct a settlement along the Hudson River.

Stuyvesant was responsible for seizing Beverwyck – the financial jewel in Van Rensselaer’s colony, imprisoning Van Rensselaer’s manager – Brant van Slichtenhorst, beating van Slichtenhorst’s son and hitting his children with rifle butts, imposing the first property taxes, and now somehow nearly destroying the beaver trade. Most of the merchants were unhappy with the unlimited competition and the traders out in the woods cutting off trade before it reached Beverwyck, outside the walls of Fort Orange.

Many residents of New Netherland must have felt that Stuyvesant had to go. Under his administration, and with the support of some of the less successful directors of the Dutch West India Company, the most successful colony in America was being destroyed. It may have been known that a British eviction of Stuyvesant and the West India Company would not meet with opposition in Beverwyck.

Stuyvesant also had little support in New Amsterdam. When he tore up British Colonel Richard Nicholls’ letter demanding surrender, the leaders of the town became infuriated. They accused Stuyvesant of being a tyrannical general representing a bankrupt company. They complained of his obstinate objections to their petitions requesting a voice in government. They refused to fight and die for an incompetent government representing a paper company.

The English were not unhappy with the Van Rensselaers and Albany merchants running the fur trade as they considered Albany to be near the end of the world and were more than willing to let the Albanians deal with the local Indigenous People. Although the British maintained the fort, the operation of Albany and the surrounding Van Rensselaer Manor was mostly left to the Dutch residents.

The British commander Colonel Richard Nicolls wrote to England: “They (the Dutch) will prove better subjects than we have found in some of the other colonyes,” meaning Massachusetts where he was already having problems. Residents of Boston were blowing trumpets outside British commissioner’s lodgings and starting rumors of increased taxes to stir up the populace.

One of the last things the Dutch West India Company did before withdrawing from New Netherland was to free all of the people they held enslaved. This community of manumitted former slaves became the nucleus of a free Black community in New York. In 1672, the Dutch re-seized Albany and renamed it Willemstadt, however in 1674, Willemstadt was ceded by treaty back to England and the name was changed back to Albany. 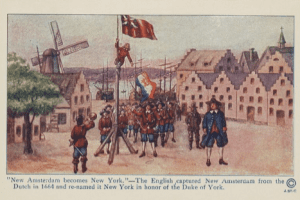 The transition was relatively smooth. The English built a large fort, Fort Frederick, at Albany in 1676. The soldiers ridiculed the Albany residents as “Dutchmen trying to imitate proper Englishmen.” The slightly askew Albany interpretation of British law sometimes led to comments that the Dutch were dumb.

The Dutch were laughed at for “acting as though power (politics) was everyone’s business when every[one] knew that power was solely the King’s business.” In Albany the businessmen had always participated in the management of the city. This type of democracy was not common in England and unknown to the soldiers.

In 1662, Jeremias Van Rensselaer married Maria van Cortland and they had six children. When Jeremias died in 1674, his brother Nicholas, together with Jeremias’ widow Maria, managed the family’s manor. In 1678, Nicholas died. In 1683, Nicholas’ widow, Alyda, daughter of Philip P. Schuyler, married Robert Livingston. In 1686, Robert Livingston received the patent to the Livingston Manor.

The relationships with Native People changed substantially under the English. In 1672, John Stuart, an English soldier at the Albany garrison was found slain. Two men, identified as Monotucks, including the only son of Chickwallop, said to be a Monotuck sachem and friend of the English settlers in Springfield, Massachusetts, was hung at the Albany fort. This is believed to be the first time an indigenous person had been subjected to European capital punishment in Albany.

English Governor Francis Lovelace must have had some second thoughts about Stuart as he wrote that he knew Stuart would “dye some violent death” and had been illegally involved in the fur trade.

When two Mohawks were apprehended in Springfield in 1693 for murdering English settlers, a Dutch delegation from Albany that included John Schuyler, son of the mayor, appealed for a commutation of their sentence to be executed. Schuyler told English authorities that all the Five Nations would look on the execution of these Mohawks as a break with them and that Albany would become unsafe.

Schuyler’s request was refused but he was successful in obtaining a delay. Shortly thereafter the Mohawks escaped. A British official wrote that they were “gone, probably unrecoverably … to Albany.”

In 1674, two years after the Dutch had ceded New Amsterdam to the English, the Dutch West India Company finally decided that the Van Rensselaers were the rightful owners of both Beverwyck (formally known as Oranje) and Fort Orange. 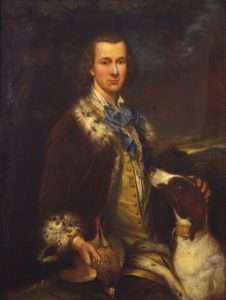 In May, 1683, English Governor Thomas Dongan arrived in New York. In 1683, under Dongan, the first Colonial Assembly was held. Albany County was chartered as one of the first ten counties. Residents of Albany requested that Albany be chartered as a city, which would once and for all establish Albany as a separate municipality not owned or administered as part of Van Rensselaer’s property.

“The Town of Albany lyes within the Ranslaer’s Colony. And to say the truth the Ranslaers had the right to it, for it was they settled the place, and upon a petition of one of them to our present King (James II) about Albany, the Petitioner was referred to his Matys [Majesty’s] Council at Law, who upon perusal of the Ranslaer’s Papers, made their return that it was their opinion that it did belong to them. Upon which there was an order sent over to Governor Edmund Andros that the Ranslaers should be put in possession of Albany & that every house should pay some two Beavers … per annum for 30 years and afterwards the Ranslaers to put what rent upon them they could agree for.”

After an impartial reading of Van Rensselaer’s original grant from the Dutch West India Company, Governor Dongan and the King’s Council at Law determined that the Van Rensselaers owned Oranje-Beverwyck-Albany and it should not have been taken away.

Dongan went on to say that he had negotiated a release from the Van Rensselaers for the land encompassing the city of Albany and subsequently granted Albany its charter as a city in 1686. New laws were passed strengthening the Van Rensselaer’s control over trade which were undoubtedly part of the negotiations.

Upon the death of Kiliaen II in 1687, he was succeeded by his cousin, Kiliaen III, son of Jeremias (1663-1719) and Maria van Courtland as the fourth patroon, although Kiliaen III was not recognized in Holland and all of the patroon’s estate in Holland was awarded to the son of Jan Baptiste Van Rensselaer. The fifth, sixth and seventh patroons were Stephen I, II and III, son, grandson and great-grandson of Kiliaen III.

Illustration: Stained glass window with van Rensselaer family coat of arms given to the Dutch church in Beverwyck by Jan Baptist van Rensselaer in 1656 (When the church was demolished in 1805, it was installed at the head of the staircase in the Van Rensselaer Manor House, which was demolished in 1893 – it’s now held by the Metropolitan Museum of Art); NIEUW AMSTERDAM OFTE NUE NIEUW LORX OPT TEYLANT MAN by Johannes Vingboons (1664), an early picture of Nieuw Amsterdam (New Amsterdam) made in the year when it was conquered by the English under Richard Nicolls; The moment that New Amsterdam became New York; and a portrait of Colonel Thomas Dongan from Castleton Manor, Staten Island.