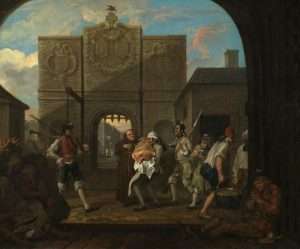 From the Renaissance onward, obesity had suggested wealth and power. It pointed at the means to supply and enjoy the luxury of food. Plumpness equaled prosperity. If one’s body was a temple, then being the size of a cathedral signaled status. Physical proportion was a badge of economic and physical well-being, both in individual and national terms.

The name of John Bull is a national personification of Britain created by John Arbuthnot in 1712. It was first popularized by British print makers and then copied overseas by illustrators and writers such as Thomas Nast and George Bernard Shaw, author of John Bull’s Other Island. Arbuthnot provided John Bull with a sister named Peg (Scotland), and a traditional adversary in Louis Baboon (the House of Bourbon in France). Peg continued in pictorial art beyond the eighteenth century, but the other figures associated with the original tableau dropped away. 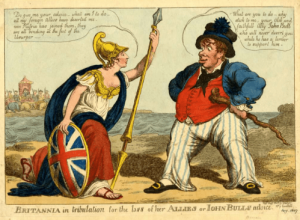 John Bull is usually portrayed as a bulky man in a tailcoat with breeches and a Union Jack waistcoat. He wears a low topper on his head and is accompanied by a bulldog. As a literary figure, John Bull is full of common sense and of native country stock. Only in 1803, the year that England panicked about a possible French invasion, did John Bull become a political beast in the cartoons of James Gillray and friends, an unbending character bravely blocking Napoleon’s attempts to violate Britannia.

Bull is not a figure of authority, but rather a yeoman who likes beef, beer and domestic peace. His diet is an expression of class identity. Central to the national menu, beef lent itself to simple forms of cookery. It had an honest, independent and “Protestant” character, contrasting vividly with French
sophistication. By eating quantities of beef, John Bull showed contempt for the “kickshaws” enjoyed by the aristocracy (the word kickshaw is a corruption of quelque chose, meaning French-type dishes using eggs and cream).

William Hogarth disliked foreigners. In 1748, he visited France and was not impressed. He decided to return home early. While waiting at Calais for a ferry, he sat down to sketch the city gate – only to be arrested for espionage. As an act of revenge, he painted “The Gate of Calais,” better known since as “The Roast Beef of Old England.” Hogarth established in visual form the stereotype of the starving Frenchman that was used time and again by satirists after him.

His picture shows a huge rib of beef being delivered to Madam Grandsire’s, an English hotel in Calais. Surrounding the porter are some shady local characters: a trio of poor fishwives, a pair of miserable soldiers, a salivating friar, a couple of emaciated cooks, and a hungry pauper in the tattered uniform of the failed Jacobite rebellion. These hungry figures stand in striking contrast to the anticipated plenty represented by the weighty hunk of meat central to the scene.

The symbolism is plain: Vive les Rosbifs! Tradition in food is set against foreign fashion, simplicity against affectation, Old England versus foppish France.

A true British patriot was a person who consumed quantities of roast meat, hearty puddings and pies, and drank fortified wine and port. If this diet caused gout, he endured the pain with stoic pride. It was the penalty an affluent society paid for protein-rich diets.

Gout has traditionally been associated with high living. A condition that causes inflammation and swelling in the joints and usually “attacks” the big toe, was known in ancient Egypt, Greece, and Rome where it spread under the Empire and caused its decadence. Hippocrates already identified gout as a male disease.

Late in his life, Benjamin Franklin suffered numerous gout attacks. These episodes caused much pain and decreased his mobility dramatically. In 1780, during a six week period in which he was confined to his house, Benjamin penned a comical “Dialogue between Franklin and the Gout.” In this exchange with “Madam Gout,” the author reflects on his own weaknesses (his love for red meat, fortified wines, and lack of exercise) and what he can do to overcome them. 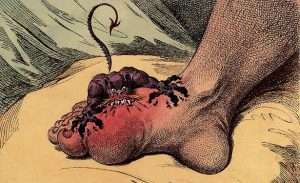 Gout acquired an eighteenth century aura. Bewigged grandees boastfully nursed their big toes. It had “patrician” pretensions and was regarded as a mark of genius. After all, writers, artists and scientists represented society’s creative elite and men of letters such as Voltaire, Smollett, Cowper, Fielding, and Joseph Banks had suffered the pain.

The affliction was thought to be hereditary as gout ran in “good families.” Thomas Sydenham was a pioneer in the clinical history of gout. Having suffered for more than three decades from the disease, he published A Treatise on Gout and Dropsy in 1683 that set further research in motion. He took pride in the fact that he shared his gout with “kings, princes, generals, admirals, philosophers.”

The Earl of Chesterfield described gout as the “distemper of a gentleman.” The ailment was often identified with rheumatoid arthritis which inspired Ambrose Bierce in his Devil’s Dictionary to define gout as a “physician’s name for the rheumatism of a rich patient.”

Obesity and gout were interpreted as the outward signs of success. They were badges of patriotic pride, economic well-being, and spiritual aristocracy. 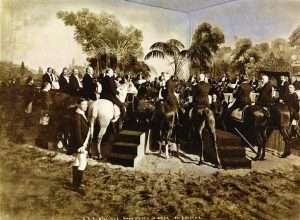 America’s Gilded Age was an epoch of colossal hubris driven by the pipe dream of an endlessly progressive future. Excess ruled every aspect of life. There was a proclivity to aim for the big and biggest in the building of palatial mansions, theaters, or department stores; or in the splendor of musical extravaganzas and costume balls.

Extreme dinner parties organized at Delmonico’s or other restaurants typified the era. In an ostentatious display of indulgence, tycoon C.K.G. Billings (a Saratoga native) combined his love of horse racing and gastronomy into a lavish dinner on horseback with thirty-six male friends. The dinner took place on March 28, 1903 at Louis Sherry’s restaurant on Fifth Avenue and 44th Street.

Over-the-top food consumption was part and parcel of the period. Amongst males, bulging abdomens and double chins symbolized social status; wealthy women were encouraged to display Rubens-like bountiful figures. Corpulence was to be celebrated and led to the creation of exclusive Fat Men Clubs for males weighing over 200 pounds. 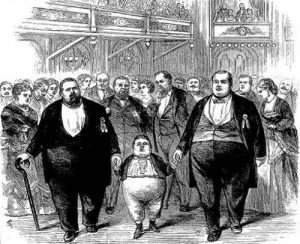 The first FMC was founded in New York City in 1869. The club held its inaugural annual ball on the evening of Monday, December 20, at Irving Hall at the southwest corner of Irving Place and East 15th Street.

Seven-year-old Thomas Conway, weighing over eighty pounds, was introduced as guest of honor by restaurateur John A.P. Fisk (358 pounds), President of the club. Members included the Superintendent of the Brooklyn Water Works and the Inspector of Sewers, as well as lawyers, contractors, and police officers. For a while these organizations were wildly popular (the New England FMC had more than 10,000 members in its heyday).

Although FMCs sponsored a range of activities, their primary pursuit was honoring size. Meetings began with customary weigh-ins where the heaviest members were awarded (edible) prizes. Many clubs deferred to the scale as a tool for selecting its officers. After these preliminaries had taken place, the feast of gluttony could start in earnest. The meeting’s major agenda item was to consume as much as humanly possible. FMCs popularized eating contests in American culture. 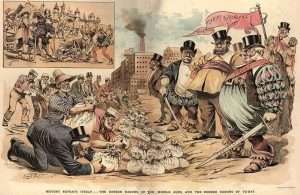 When in 1909 the Manhattan FMC held an all-you-can-eat contest at their East Third Street clubhouse, several reporters were present to watch Frank J. Dotzler, a 380-pound former alderman, devour 275 oysters, eight pounds of steak, three pies, twelve rolls, and eleven cups of coffee. He won $50 and the public’s admiration.

Rotund men were associated with wealth and affability. That sense of prosperity lingers in “fat cat,” a 1920s barb at a wealthy person, especially one with political influence. The jolly fat man became a cherished archetype, but its polar opposite was just as prevalent.

FMCs were not just venues to celebrate the joy of eating. Through banquets and dances members gained access to prominent business leaders and politicians. Club meetings were fraternal Masonry-like networking events. And not all participants were pleasant fat men – far from it. Obesity was not just associated with potency, it also alluded to the misuse of power. Samuel Ehrhardt’s cartoon of ruthless fat Robber Barons reflected a wider held image. 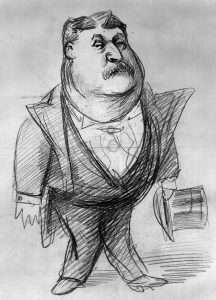 The term Robber Baron came in circulation during the late nineteenth century and was applied to tycoons who used exploitative practices in building massive business empires and accumulating unprecedented wealth. They were brutal monopolists who earned profits by intentionally restricting the production of goods and then raising prices. The term is inextricably linked to the Gilded Age.

One of the most notorious magnates was James Fisk, a flamboyant character known as the “Barnum of Wall Street” and nicknamed “Jubilee Jim.” A financier and swindler, he surrounded himself with corrupt judges, sheriffs and lawyers, and put on a blatant display of chicanery. Fisk was the stereotype fat Robber Baron and played his part with exuberance, living a life of loose behavior, public deception, and financial manipulation.

In an age of astonishing appetites, a man who carried a great stomach before him was thought to be in his prime. The eminent Pierpont Morgan would routinely consume seven- or eight-course dinners. He ate breakfasts of steaks and chops, eggs, pancakes, broiled fish, rolls and butter, fresh fruit and cream. America at the time was, as E.L. Doctorow wrote in his splendid novel Ragtime (1974: chapter 11), a “great farting country.” Food consumption was a sacrament of success.

In 1908 William Howard Taft was elected the twenty-seventh President of the United States, the chosen successor of Theodore Roosevelt. Massively obese, he weighed 332 pounds when taking office. He was a true son of the Society of Fat Men. 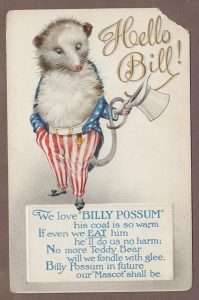 In January 1909, Taft was guest of honor at a banquet in Atlanta. At his request, the main course was “possum and taters.” Having consumed a huge dinner, Taft was presented by local toy-makers with a small plush opossum. They intended to replace Roosevelt’s Teddy’s Bear with the new toy they had dubbed “Billy Possum.” Expecting another bestseller, the Georgia Billy Possum Company introduced the slogan “Good-bye, Teddy Bear. Hello, Billy Possum” and churned out thousands of the stuffed toys. The initiative failed. Billy Possum died within a year whilst Teddy’s Bear survived. America was changing.

In the first quarter of the twentieth a shift took place in attitudes toward body size. Being overweight became aesthetically unattractive and physicians and insurance companies warned it was dangerous. Emancipated women raised their voice. Demanding their share of pleasure, they called for male fitness. The age of submission was past.

Driven by concerns about appearance and performance, men began to regulate their weight. Being fat was no longer feted. Indulgence was replaced by restraint and exercise. FMC membership plummeted. Shortly after leaving office in 1912, William Taft went on a diet.