Baker had started her career as a young dancer in Vaudeville shows where her exuberant talent was quickly spotted. When she moved to New York City she joined in the festival of black life and art now known as the Harlem Renaissance, but segregation and racism drove her away from home.

Having settled in Paris in 1925, she became the darling of a vibrant audience that flocked to the city’s nightclubs to cheer her semi-nude performances and trademark banana skirt, boosting French cabaret with a renewed sense as vanguard entertainment.

The history of the genre is a tale of disobedience, leaving a blazing trail of unruly behavior. Defiance of the moral code constituted both the essence and appeal of cabaret. Baker absorbed that tradition with relish by stretching the allowable to new limits.

Later, she gained universal respect for her active role in the French Resistance during the Second World War and her fight for freedom and equal opportunity for all members of society. 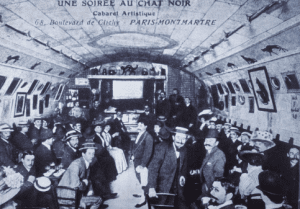 In 1881 Louis Rodolphe Salis opened the Chat Noir in Montmartre. The club presented itself as a “cabaret artistique,” a meeting place for writers and artists. Guy de Maupassant was a regular; Paul Verlaine wrote poetry and drank absinthe seated at a marble table; Erik Satie played the club’s piano.

Decoration played its part in the nightclub’s success. In an ambiance of carefully designed chaos, Louis XIII-styled furniture and fittings were arranged in grotesque settings; walls were covered with green drapes; plants and plates were stacked in niches. All paintings had been created by resident artists (the “artist-in-residence” was a new concept). The ambition was to mix ancient and modern, to blend rococo and commonplace, to fuse style and kitsch.

The Chat Noir inspired other club owners to develop specific themes. At the Cabaret du Ciel waiters were dressed up as angels; guests sipped “ambrosia of the gods” and were treated to “celestial” music while beholding burlesque rites (striptease in other words). At the Café du Néant visitors entered a chamber lit by candles stuck on a chandelier made of human skulls.

In 1885, Aristide Bruant opened a Le Mirliton in Montmartre. Its owner – the man in the red scarf and black cape featuring on Toulouse-Lautrec’s posters – performed accusatory ballads about the fate of the downtrodden. The “chanson réaliste,” songs dealing with deprivation and peppered with political commentary, made an instant impact. The genre would be brought to perfection by Édith Piaf.

When Ada “Bricktop” Smith arrived from Harlem in 1924, Paris started to take notice of jazz and modern dance. Josephine Baker arrived a year later. Once she had set audiences alight with her Revue nègre, French cabaret became hooked on swing and the “banana dance.” She added new dazzle to show business.

With an audience consisting of financiers, well-connected ladies, prostitutes, and criminals, the nightclub was a place where middle-class citizens released themselves temporarily from the shackles of respectability. They partook in the recreational practice of “slumming.” Visiting shady clubs became an ingredient in the allure of urban nightlife. 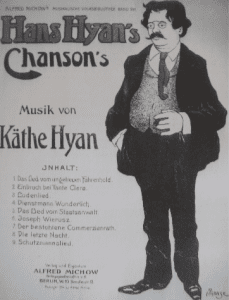 The cult of cabaret began to concern the city’s authorities. In November 1901, Hans Hyan founded a club named Zur Silbernen Punschterine. He was celebrated by his admirers as Berlin’s counterpart to Aristide Bruant. He sang about outcasts and shouted insults at his audience with a command of dialect and a range of slang that was masterful. Novelist Kurt Tucholsky praised the performer for capturing the “soul of Berlin.”

At the same time, the police kept an eye on this “criminal” who had been imprisoned for burglary, investigated for robbery, fined for libel, and suspected of publishing pornography. The disquiet got worse when Hyan contracted the by now notorious Dolorosa. Her crowd favorite “Song of Songs of Pain and Torture” was proof to many observers that cabaret had deteriorated into a jamboree of immorality. The club was shut down in 1904.

During the First World War, Zurich was a haven for refugees who searched for peace and sanity. Artists, intellectuals, and other fugitives swarmed to the cosmopolitan city where they met in bars and cafés, discussing the precarious future of Europe. Among them were German poet Hugo Ball, Romanian writer Tristan Tzara, and Alsatian painter Jean Arp.

Repelled by the slaughter of war, these artists had lost faith in traditional culture. Throwing overboard artistic conventions and protocols, they sought for alternatives by establishing a “playground of crazy emotions.”

To create that experimental space, Hugo Ball founded Cabaret Voltaire in February 1916. Based on the model of pre-war hot spots in Paris and Berlin, Voltaire – the great warrior against the “spirit of the age” – was chosen as the club’s godfather. All visitors were welcome to take part in performances which were presented to and with a noisy, mainly young audience. Ball and co-founder Tristan Tzara also announced the publication of a magazine entitled Dada. Legend has it that the newly coined term “dada” was adopted by the duo after randomly sticking a knife into the dictionary.

The Cabaret Voltaire closed its doors in June 1916. A month later, a small group of Dadaists hired a room at Zurich’s Zunfthaus zur Waag to launch Hugo Ball’s manifesto of the new movement. Performances and displays were calculated to shock the audience and knock art off its pedestal. Dada was anti-art.

Artists used their work to make sociopolitical statements (hence their passion for manifestos). Many of them admired the writings of Russian radical Mikhail Bakunin who, in 1843, had spent six months as a political exile in Zurich. Hugo Ball referred to the philosopher’s anarchism as “Dada in political disguise.”

The Zurich-interlude added elements of satire and anarchistic cynicism to the cabaret tradition. Dada raised cabaret to the level of the illogical and bizarre – it was ruled by verbal absurdity. This emphasis on the spoken word became part of Berlin’s cabaret praxis. It produced a theatrical renewal that included the work of Berthold Brecht and Max Reinhardt.

Frida Uhl, daughter of the editor of the Wiener Zeitung, was working as an author and translator in Vienna when, in 1893, she met the much older August Strindberg who was the author of more than twenty plays. In marrying the morose misogynist, she sacrificed the relationship with her family and her own career as a writer. In 1895 the marriage (with child) ended in divorce. 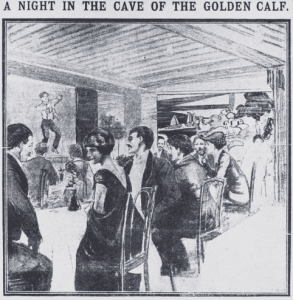 Father of Frida’s second child was Frank Wedekind, the German playwright. She sent both her children away to be cared for by her parents and moved to London. In 1912, she opened the Cave of the Golden Calf (named after a room in the Chat Noir) at Heddon Street, an alleyway off Regent Street. England’s first “Cabaret Club” was housed in a basement below a warehouse.

In a “Preliminary Prospectus,” issued in April 1912, Frieda claimed that the club would end the need of crossing the English Channel in order “to laugh freely and sit up after nursery hours.” As this comment suggests, the Cave of the Golden Calf looked to the Chat Noir for inspiration.

The Cave attracted London’s bohemian set. Within its walls guests enjoyed the cabaret repertoire of plays, poetry, jazz, and ragtime with champagne served until dawn. The Cave went bankrupt in 1914 and Frida left for New York where she was hired by William Fox to research possible screen stories.

During the 1920s London’s youth culture took center stage. The lifting of war time restrictions started the party. West End entrepreneurs re-opened cabaret clubs and dance halls. Fashion dominated the headlines and the flapper became synonymous with the age. Since the BBC’s first broadcast in 1922, wireless radio was the marvel of the age.

A hedonistic generation, known as the Bright Young People, became synonymous with outrageous behavior. Considered spoiled and irresponsible, they furnished the press with a flow of scandal stories, whilst society’s poor suffered in silence. London’s cabaret became the domain of a cohort of aimless youngsters.

New York nightspots that provided music and song during the 1910s were known as “cabarets.” Dance was their main attraction. In 1913, Manhattan’s cabarets were forced to close at 2 am. As a consequence, private clubs opened up for drink and dance till all hours.

In 1915, New York’s first Paris-inspired cabaret Sans-Souci opened at 42nd Street. It was owned by Vernon and Irene Castle who, before their return to New York, had worked as a dance act at the Café de Paris. Introducing the latest American ragtime dances, the Castles were for a while the rage of Parisian society. Their success was widely reported in the United States. 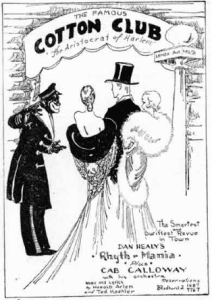 Five years later Jack Johnson, the first black boxing champion, opened Club Deluxe at the corner of 142nd Street and Lenox Avenue. At a time that some 200,000 African-Americans had made New York their home, Harlem became a cultural hub for jazz and dance. In 1922 the club was taken over by Owen [Owney] Madden, a Manhattan gangster. Having renamed the house Cotton Club, he turned it into Harlem’s prime cabaret and used the premises as an illegal outlet to sell drink.

Catering for an affluent white clientele, the club’s interior was designed to create a plantation atmosphere. Entertainers were African-American; staff members acted as plantation residents. With Duke Ellington leading the house band, music evoked a jungle atmosphere. Classics such as “Mood Indigo” and “Creole Love Call” were first performed by Ellington’s band during its Cotton years. Cabaret in New York was dominated by music and modern dance.

The twenties were roaring which worried the city’s civic and religious leaders. Blaring music, shameless dancing, binge drinking, socio-racial mixing, and political anarchists – all boundaries seemed busted. Excitement spread like a virus among white New Yorkers. For young women it was a time of liberation. The age of chaperones was past and they too spent late evenings in Chinatown dens, jazz clubs, and speakeasies. Critics complained of moral degradation; civilization was at risk. How to enforce Prohibition? 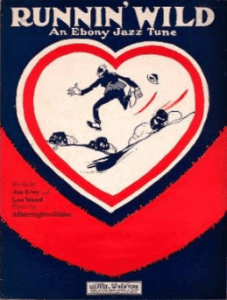 Enacted in 1926, the New York City Cabaret Law made it illegal to host musical entertainment without a license on the grounds that there was too much “running wild” in nightclubs. In its wording, the Committee responsible for drafting the law may have been referring to the 1922 “Running Wild” jazz tune that had unleashed the Charleston craze.

At a time that Harlem’s creative fountain was overflowing, the law seemed to target racially mixed jazz clubs. In response, many African-American performers packed their bags and moved to Europe where they soon enjoyed mass followings – and nobody more so than the legendary Josephine Baker.

November 30th was a momentous display in honor of an irresistible star, a celebration of the cosmopolitan history of cabaret, and a tribute to the proud legacy of Harlem’s black culture.

Illustrations, from above: President Emmanuel Macron honouring Josephine Baker’s cenotaph at the Pantheon on November 30th, 2021; an evening at the Chat Noir, Montmartre; Toulouse Lautrec’s iconic Aristide Bruant poster; collection of Hans Hyan’s songs, Berlin; image of the Cave of the Golden Calf, 1912/3; all black entertainment for a white audience at the Cotton Club depicting the doorman as a minstrel-like parody; sheet music of Running Wild, 1922.