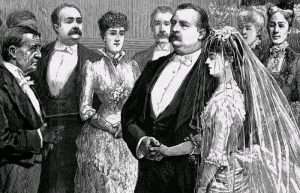 Trivia clue: She was arrested at the St. Louis fair grounds in 1887 for throwing a pancake at First Lady Frances Cleveland.

Correct response: Who is Annie Sax? – who seemingly had good aim, but made a poor choice of targets.

“A remarkable incident occurred Thursday at the fairgrounds. When the president’s carriage was passing one of the booths, Mrs. Cleveland was startled by the sudden appearance of a hot pancake in her lap,” The Morning Star of Glens Falls reported on October 7th, 1887.

It was not an accident.

“The police quickly arrested the cake maker, Annie Sax, a comely young cook. Yesterday in court she explained that something impelled her to hit Mrs. Cleveland with a pancake.”

Following are more anecdotes of the lighter side of politics, collected from northern New York historic newspapers.

Albany native Jane Elizabeth Stanford, wife of U. S. Senator Leland Stanford, celebrated her 58th birthday by distributing $5,000 – the equivalent of $147,122 in 2021 dollars – to kindergartens in San Francisco, The Morning Star reported on July 15th, 1886. One might call it vegetarian pork barrel spending.

“Brayton Harris, Queensbury, exhibited specimens of oats six feet in height yesterday. They were grown on a piece of land that was cleared about 100 years ago,” the Glens Falls Morning Star reported on August 3rd, 1886. “The crop will harvest about 300 bushels.”

On November 1st, 1864, The Glen’s Falls Republican reported that an anthology of President Abraham Lincoln’s “authentic, obscure or questionable” jokes was being published.

On December 5th, 1890, The Granville Sentinel reported that 14 farmers would serve in the incoming New York state Assembly.

On September 16th, 1887, The Morning Star reported that President Grover Cleveland hand-wrote all his letters and speeches. “He tried dictating to a stenographer some time ago, but found that he could do his work much better when he wielded the pen himself.”

Republican men in Granville pledged to use common vocabulary. “Attend the Republican rally at Norton Hall Friday evening of this week,” The Granville Sentinel urged on October 5th, 1888. “The ladies are especially invited. There will be no political slang.”

“The political crop out this way is alright. The harvest is ready, and, unlike old times, the reapers are plenty.” – The Granville Sentinel, October 31st, 1890.

“Political memories are short. So are political animosities.” – The Granville Sentinel, November 21st, 1890.

“The Senate favors a sea level canal. The House insists on a lock-and-dam. But a whole lot of people don’t give a – that is to say, any old kind of canal that will hold water.” – The Argus of Albany, June 16th, 1906.

“It is mentioned that the wife of Acting Governor Harris of Ohio washes her own dishes and scrubs her own Kitchen floor. This is meritorious, if it is not the advance agent for a campaign leading up to ‘the scrubwoman in the White House,’ or something of that sort.” – The Argus, June 25th, 1906.

“The ‘pork barrel’ is officially known as the omnibus public buildings bill. But the speed with which it sailed through the House was more like one of those red devil wagons than an omnibus.” – The Argus, June 28th, 1906.