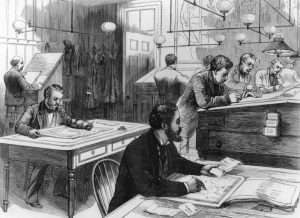 Trivia clue: This federal agency that started as an experiment of the Army Signals Corps and was transferred in 1887 from the War Department to the Department of Agriculture.

Correct response: What is the U.S. Weather Service?

“One genuine reform, urged for years, has at last become an accomplished fact,” The Granville Sentinel editorialized about the move on July 10th, 1891.

“The red tape of Army routine no longer binds the weather service, and men who evince an aptitude for the work, inspired by a genuine love for science, will no longer be handicapped and held back by the iron rule of seniority and precedence. … The Sentinel looks with confidence to a speedy increase in reliability in weather forecasts, and a corresponding addition to the usefulness of the bureau.”

In other lighter side of politics anecdotes collected from northern New York historic newspapers:

* In the category of now obscure third parties – “Still another party has entered the political field in New York state. Its purpose is to help the election of senators and assemblymen who will favor a ‘continental Sunday,’ or, in other words, freedom to drink beer on Sunday.” – The Morning Star of Glens Falls, October 10th, 1887.

* U.S. Rep. Sam Rayburn not only lost the speaker’s chair after Republicans took control of the House in the 1946 elections, he also lost use of a car the federal government provided the House speaker at that point in time.

House Democrats, on their own dime, made sure Rayburn, now House Minority Leader, still had a vehicle, The Post-Star of Glens Falls reported on January 31st, 1947.

“In a ceremony at the capital’s door, they presented him with a brand new $3,602 automobile – the gift of his colleagues who chipped in $25 each to foot the bill.”

“The priest who performed the baptismal ceremony notified Mrs. Cleveland of the event, and Mrs. Sponcie has since received a letter from that lady enclosing $25 (the equivalent of $731 in 2021 dollars) as a gift to the infant.”

* On January 4th, 1972, The Post-Star of Glens Falls reported that the Fashion Foundation of America selected Treasurer Secretary John B. Connally as Best Dressed Statesman of 1972.

“All is quiet in police court. Not even an election case fell into the hands of the justices yesterday. What agencies of moral reform are at work?” – The Morning Star, November 8th, 1887.